We just had our sixth-year ‘Aliyah-versary’ and we got a wonderful present. A peace agreement!

Okay, so it’s not exactly a comprehensive, final settlement of the conflict with the Palestinians, but, I have say, 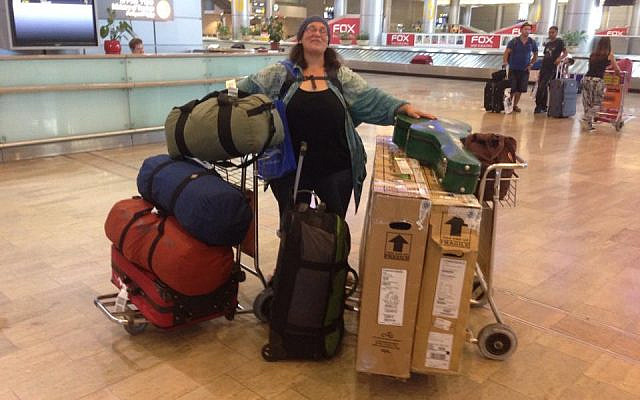 Arriving six years ago at Ben Gurion with all our gear. (courtesy)

especially as the parent of two young children who may one day do army service here, I have been kind of dancing inside since I heard the news. A deal with the United Arab Emirates. A peace agreement!

And, let me tell you something, it’s not just the conflict with the Palestinians that has been keeping me up at night — it’s the conflict between Israeli and American Jews, at least the American Jews who are of a fairly liberal bent. You know, the kind of American Jews that nearly all my friends and acquaintances are (and that I really am in the American part of me as well).

The tension between Israeli and American — especially young — Jews has been growing for some time. But the prospect of annexation that we’ve been living with in recent months threatened to be a kind of ‘last straw’ (I suppose that it was even ‘on the table’ is what motivated Peter Beinart to make his big I-hate-the-two-state-solution announcement). But now it’s off the table. No annexation! I’m dancing inside!

Really, I can’t tell you how hard it is for me to read all the overheated anti-Israel rhetoric coming from American liberal Jews, some of whom I sat in rabbinical school classes with and went on tiyulim with in places like Ein Gedi by the Dead Sea. It breaks my heart. It seems like they’ve directed all their capacity of empathy at the Palestinians and don’t have any left for the people of Israel’s south who live every day with the threat of a renewal of a rain of rockets from Gaza.

The end of the annexation plan isn’t going to heal the rift between Israelis and these Americans, but it will, hopefully, slow down its decline. As someone who made Aliyah when he was already well into middle age and who still communicates mostly in English, I stand between these two great world Jewish communities, with one foot in one and one foot in the other. In both personal and professional lives I seek to function as a bridge linking the two worlds. Annexation threatened to make that almost impossibly hard.

It’s been kind of shocking to me that there hasn’t been more celebration, or even just talk, about the deal among American Jews (it’s certainly been on the news all the time here in Israel!). I think I get it, though. No one of liberal leanings wants to give credit of any kind to the kind of person who would fall as low as to attack an American-born opponent just for being the child of immigrants. So, they just dismiss the Trump-brokered deal as a big nothing, or some kind of cynical effort to manipulate the electoral process.

And, of course, it’s just the UAE. The Palestinians themselves aren’t involved at all, not to mention the Saudis and the other giants of the Sunni Muslim world. But, seriously folks, this is one time Trump is actually right — it’s HUGE! Since 1948, it’s been a taboo throughout the Arab world — broken only by two nations who directly border on Israel and were humbled by its military force in two short, violent wars — to have any formal relations with Israel. Now the UAE has broken the taboo, which, assuming things go well, could open the door for a wider normalization of relations.

I first visited Israel in the summer of 2000. Those were heady days. Bill Clinton brought both Ehud Barak and Yasser Arafat to Camp David. We thought it was all about to be over. A comprehensive peace agreement. We could taste it. An end to war at last.

As we all know, that ended in terrible disappointment. By September the Second Intifada was underway. Israel endured the worst spate of bus bombings it ever did. Four years of terror. I lived and studied here for the first year of it. I remember what it felt like. I met people that year who would later be killed in the 2002 Hebrew University cafeteria bombing.

Yeah, I understand it. The hunger for it all to be over. To truly beat the swords into ploughshares. For the terrible sacrifice of Yitzhak Rabin on that dark 1995 day to finally be avenged not with blood, but with what he was most willing to risk his life for. Peace. Real peace. Shalom.

I know this is not it. It’s not the end to it all. But maybe it’s a start. So I’m grateful. So grateful.