Allow me to start off by saying that as someone who grew up Reform, I will be the first to admit that Reform Judaism is a cult. What was once a convenient means of enjoying a watered down version of Judaism has become a breeding ground for progressive liberalism with cultural Judaism as an afterthought. Reform rabbis today are so pathetically devoid of Jewish values, they will perform any type of ‘religious’ ceremony for the right price. This includes gay marriages, intermarriages and bar mitzvahs for dogs (yes, you heard right).

So why does this sect whose values are closer to Antifa than Judaism even care about the Kotel?

I’ll get to that in a minute but first, there’s something you need to understand about the current state of Reform Judaism. Reform Judaism’s mission statement was relatively simple: Jewish continuity with minimal commitment. But like Communism, it sounded great in theory yet failed in practice. This can be demonstrated with regards to recent statistics showing an over 70% intermarriage rates among non-Orthodox Jewish couples. This places the entire Reform movement in deep trouble as they no longer bring anything to the table for secular Jews looking to maintain some sort of connection to the tribe. After all, why would any parent waste a Saturday on synagogue when it has zero impact on their children’s odds of marrying a Jew? The answer is that they shouldn’t and the Reform movement knows it. Reform Judaism is a sinking ship and they desperately need an airlift to become relevant again before they start swimming. That’s where the Kotel battle comes into play. Reform leaders know that if they can portray themselves as victims of an ultra-Orthodox onslaught, they will gain much-needed sympathy from potential congregants (and donors) who cringe at the notion of ultra-orthodox jews having any semblance of authority. That’s why they’ve invested millions of dollars in lobbying the Israeli government to give them the green light to challenge the haredi monopoly over the Kotel. 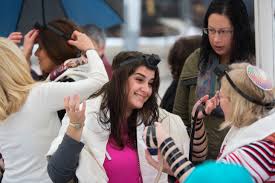 Women of the Wall at the Kotel

So if the Reform is exploiting our holy site for political gain, why in the world should we Torah Jews throw our weight behind them?

The answer is simple. The Kotel isn’t holy at all. The Kotel is nothing more than a retaining wall for the mountain of the actual holy site-the Temple Mount. In fact, during the 2nd Temple period, the Kotel plaza was a bazaar where merchants sold animals. This makes the Kotel about as holy as is the King David Hotel.

And while most Religious Zionist Israelis want to build the third Temple, they are hesitant. The very notion of building the third Temple has become taboo (outside of prayer) for many Religious Zionists who place the government’s will before the Torah’s commandments. Haredim on the other hand, could care less what Israel’s secular government thinks. They are willing to take to the streets anytime the Knesset prevents them from executing a Jewish value. The only exception to this rule is praying on the Temple Mount (the site of the future Temple). The Haredi leadership has no qualms about being prevented by Israel’s secular government from building the 3rd Temple even though it’s a direct Torah commandment (de-o-riysah).

The reason they don’t want to build the 3rd Temple is because if they do, the haredi leadership will lose their hegemony over their followers who enable them to maintain their positions of power. They enjoy a virtual monopolistic stranglehold over Israel’s religious institutions such as kashrut, conversion and marriage licensing as well as prayer at the Kotel.

This makes the haredi leadership worse than the Reform.

That’s because at least the reform movement doesn’t pretend to represent authentic Judaism. Haredi leaders on the other hand, do. And they would rather ignore a direct Torah commandment just to maintain their status. That being said, if the Reform conquer the Kotel, it’ll send a serious blow to the current haredi leadership. After all, no self-respecting haredi will take orders from someone who lost their ‘holiest site’ to a bunch of lesbian rabbis. This means that if the Reform are victorious, the devastating loss can lay the groundwork for a new haredi leadership.

And there are many Haredim who see through the corruption of their leaders. They scratch their heads at the notion of a third temple falling from the sky, a commonplace notion among today’s Haredi leaders.

Most importantly, their defeat can pave the way for a new Haredi leadership who realizes that the Kotel is irrelevant. A new haredi leadership that understands that building the Temple is a commandment that should be done in our time. A Haredi leadership, who unlike Religious Zionist leadership, will always favor Torah values over secular, self-flagellating government decrees. If that happens, we will owe an unexpected debt of gratitude to the Reform movement who should always be allowed to pray in the parking lot of the 3rd Temple-the Kotel.