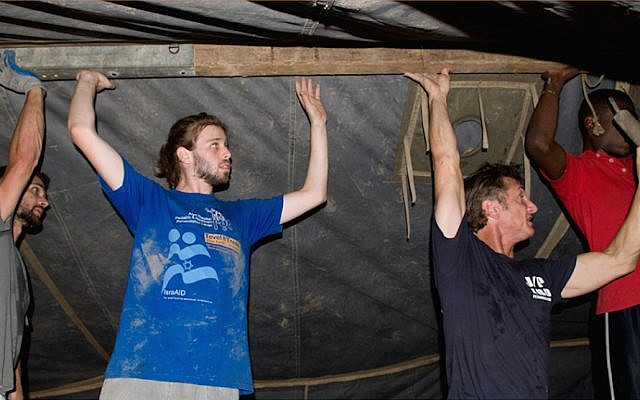 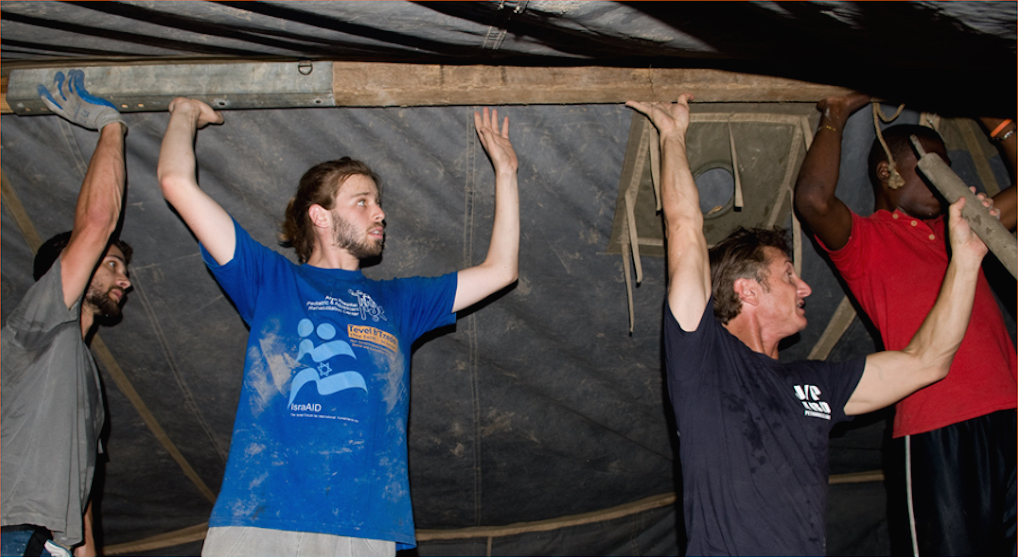 During the years since I founded Tevel b’Tzedek, an Israeli-based organization that works in poor villages in places like Nepal, Haiti and Burundi, I have often been asked whether Tevel’s purpose is to help create a positive image of Israel abroad. And I have always answered no. We do what we do, I say, because it gives us joy, because the villagers have a lot to teach us about life, and because of our belief, rooted in Jewish tradition, that we are all part of a single, unified world. If anything, our Jewish agenda is internal: by stretching the horizons of Judaism towards global poverty and the environment, we teach a younger generation to see their Judaism as a powerful platform for creating a more just, beautiful and sustainable world. I believe that if our help for others was meant to create publicity for Israel, Tevel would lose the depth and power that comes from our “leshma,” from doing what we do for its own sake.

And yet, over the years, it has become clear to me doing good in the far flung (for us) corners of the globe does change people’s hearts and minds about Israel. In Nepal and in Haiti, celebrities such as Chelsea Clinton and Jimmy Carter, as well as more than one Prime Minister of Nepal and President of Haiti, have been struck by the ability of our young Israeli volunteers and staff to understand a situation, to connect with local people, to create community and help locals catalyze real change. Outside of the usually highly mediated and guarded channels of power and celebrity, in what is for them a “temporary autonomous zone”, it’s often easier for trend-makers and celebrities to drop their preconceptions and see things with new eyes.

It was in Haiti that we got to know Sean Penn — and Sean got to know us. Tevel doesn’t “do” disasters — usually. We believe that extreme poverty itself is a disaster, and that long term work on the grass roots level, building community leadership and capacity in areas like agriculture and education, are key parts of addressing destitution. But when the earthquake struck Port au Prince in 2009, several Tevel alumni, who had worked in villages in Nepal, were adamant that they wanted to go to Haiti. I called Shachar Zahavi at IsraAID, because I thought IsraAID, at that time an umbrella organization that did not work directly in the field themselves, could connect our volunteers with an organization with boots on the ground. “If you go as an organization, we’ll fund it,” Shachar said. “I know your reputation. I want you to go.”

For a young organization like Tevel, full funding for a project was an offer that was hard to refuse. Within two weeks, the first of our volunteers was on the ground, and during the next six months (we eventually stayed in Haiti for five years, as IsraAID’s implementing organization) we sent 30 intense and amazing young people who had passed through our four month service learning program in Nepal to a colossus camp of 50,000 survivors who lived in makeshift tents in a sea of mud. As it turned out, Sean Penn was working there too.

The Tevel volunteers were also incredibly hard working. Nights of preparation for work often ended at 3 in the morning — with the day beginning again at 7.

The Tevel volunteers had done stints in Nepal and had soaked up the attitude that Tevel brought to its work there. “There is a whole element of rebuilding that has nothing to do with infrastructure but with people and community, with hearts and minds,” Zaki said. “We didn’t talk down to people in the camp. We belonged as much as possible, and worked with a lot of humility. And also a lot of chutzpa — which Sean appreciated but sometimes thought was too much. Still, he had the sensitivity to see what we were doing with the community, and also to appreciate that we got down into the mud with the people.” 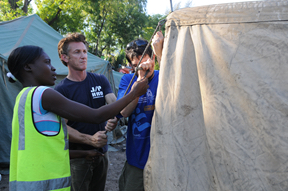 Willingness to get down and dirty was a quality that Sean Penn also displayed. GIli Thorn remembers calling J/P in the middle of a Caribbean rainstorm. The classroom-sized tents in the elementary school, the first in the camp, that Tevel had helped found and managed had collapsed. Wading through the sloping slippery camp, when she got to the tents, Gili was surprised to see Sean himself, who spent the next several hours helping Tevel volunteers get the tents back up in time for school the next day. And when, on another occasion, someone in the camp threatened a Tevel volunteer, it was Sean himself, says Gili, who rushed over within seconds, waving a pistol that he often carried with him in Haiti. Penn also came to parties at Tevel’s apartment on the edge of camp just to hang out with his new Israeli friends.

Tevel sees community as a crucial tool for strengthening the vulnerable, and so we put up the first community tents — kind of an improvised JCC — in the camps, and held activities there ranging from daycare, to youth groups, to income generation for women. When we left the camp in order to do long term work at the earthquake epicenter about 50 kilometers from Port au Prince, Penn called me personally in Nepal to get my promise that we would leave a community worker in place. J/P, he said, would pay the center’s bills. It was clear by then that something had changed in Penn’s attitude towards Israel and Israelis.

Politically, Penn was considered far to the left. A friend of Hugo Chavez, the late President of Venezuela, through whom he met and conversed with Mahmoud Ahmadinejad, former president of Iran. Zaki remembers arguing with Penn while sitting in the Haitian camp about the Gaza Flotilla, and feeling a substratum of hostility towards Israel. But after a few months of working with Tevel volunteers, Penn had also begun to find things to admire about Israel. “Israelis have such discipline and dedication,” Penn was videotaped as saying. “I’ve come to believe that there should be a service year for Americans as well. Not necessarily the army, like in Israel, but something. Some kind of giving back.”

Now Penn is coming to Israel, to attend the forum on Haiti and its recovery, despite pressure from BDS groups to cancel his trip. Penn’s determination to come, his ability to see beyond political camps and understand that Israel has multiple dimensions, is a direct result of the vitality, creativity and dedication that he encountered among young Israelis in a muddy camp in Haiti. And even though I hope that’s never the reason for Israeli volunteership abroad, it’s still a very good thing.

About the Author
Micha Odenheimer is a journalist, rabbi, and social entrepreneur. Micha founded the Israel Association or Ethiopian Jews, the first advocacy organization dedicated to changing absorption policies, and Tevel b'Tzedek, an Israeli organization working with impoverished subsistence farmers in the Global South. Micha has written for numerous publications, including Haaretz, the Washington Post, and the Jerusalem Report from Ethiopia, Somalia, Iraq, Burma, Bangladesh, Indonesia and other countries.
Comments