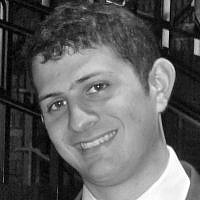 The Blogs
Joel Braunold
Apply for a Blog
Advertisement
Please note that the posts on The Blogs are contributed by third parties. The opinions, facts and any media content in them are presented solely by the authors, and neither The Times of Israel nor its partners assume any responsibility for them. Please contact us in case of abuse. In case of abuse,
Report this post.

When looking at the Israeli Palestinian conflict, there is an exasperation and irritation at the utter inability to progress forward on any meaningful peace process. Despite billions spent, the international community is stuck with limited policy options and a deteriorating political reality.

In this complex picture, when one mentions people-to-people work, the response is a sigh. For many serious policy makers, people-to-people stands for kids, kittens and camps. The community is the poster child of the failed Oslo process and something that is, at best, nice but never necessary.

This mischaracterization of this community and the old stereotype of eating hummus together and going home pays no attention to the evolution of the field and the real work and impact that this community has had, and continues to accomplish.

The best way of understanding people-to-people today is as a community that works on finding ways to integrate Arabs and Jews, Israelis and Palestinians, with equality. Their work is so necessary in a system that pushes for segregation along ethnic lines. This system has complex origins, from the overarching reality of today’s Middle East, to the threat of violence, to the way that Israel’s educational system was set up to the current governments of each community. The net effect is an entire system that pushes to segregate and separate unequally.

It is no wonder therefore that when asked, “How worried are you on a daily basis that a Jew will hurt you or a member of your family,” 79% of Palestinians say they are worried or very worried. Before the latest wave of violence, 56% of Israeli Jews were worried or very worried, and it does not take Nostradamus to predict that the statistic has likely worsened.

The fact remains that with this level of fear and mistrust of the other on a personal level, we have no ability to move forward on any potential peace process. There is simply a profound lack of the trust or humanization of the other that is needed to change the current dynamics.

The groups that are working within the system to effectively move the system over time are those within the people-to-people community. From advocacy groups working on Israeli governmental funding mechanisms, to farmers creating cross border trade relationships, to the after-school program bringing West and East Jerusalem children together, these are the tools necessary to bridge the divide.

Sadly, this best practice is also a recipe for exponentially rising costs of the programs. As one increases the number of participants each year, the program gets more costly, despite the fact that the funding pool is staying the same.

We estimate that there is roughly $45 million dollars spent per annum on what is broadly seen as peace and reconciliation work between Jews and Arabs, Israelis and Palestinians. With 12 million people, we are spending just under $4 per capita per year as an international community.

The current largest donor is USAID through its Conflict Management and Mitigation grant program, something that we at ALLMEP are very proud to have helped start and sustain through our advocacy work on Capitol Hill. Though not in the federal budget, it has for the past eight years given $10 million annually for people-to-people work between Israelis and Palestinians, Jews and Arabs and has remained level funded, despite cuts to many other items within the foreign affairs budget. The entire community is deeply indebted to the key appropriators.

Yet despite this effort, the programs are not reaching the scale they must, given the challenging circumstances and rising costs. If we are going to unlock greater resources, we need to look to other models that leverage public and private resources. In the Northern Irish conflict, the International Fund for Ireland distributed over a billion dollars over 24 years to Catholics and Protestants. Created by Congress, this fund distributed an average of $33 per capita from 1986 to 2010.

Learning from this model, ALLMEP has been advocating for the creation of an International Fund for Israeli Palestinian Peace, a $200 million annual fund with contributions from Congress, EU member states, the international community and the private sector, to scale the most successful programs that exist today. In this Congress, Congressman Crowley (D-NY) and Congressman Fortenberry (R-NE) introduced HR1489 to authorize the creation and appropriations of such a fund.

As we look to what can be achieved today, building a vehicle to support civil society, something not dependent on a particular peace process or on the ups and downs of the current moment, can create the long-term support necessary to push the system and start changing the fear dynamics.

Civil society is not alone sufficient to get us to the finish line, but without it, we have no hope at all.

About the Author
Joel Braunold is the Executive Director of the Alliance for Middle East Peace, a network of more than 85 different groups working within the field of conflict transformation with equality between Jews and Arabs, Israelis and Palestinians.
Related Topics
Related Posts
Comments