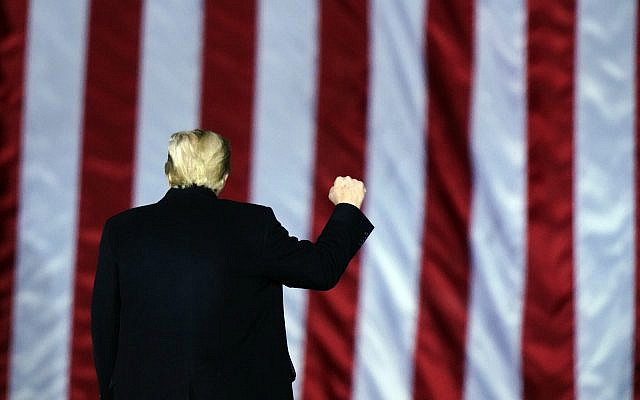 We are now facing America’s first national cult in a fight for our survival. Trump, his allies, and the “alternative news” sites have now created a completely separate reality parallel to ours. This is a much larger problem than impeaching and removing Trump.

For the past four years, the Trump administration has pushed a massive disinformation campaign parallel to the administration’s unprecedented attack on checks and balances in our democracy.  From Kellyane Conway’s “alternative facts,” to the president’s consistent rhetoric that unflattering reporting is “fake news,” a monster has been born in our country.  With each tweet about “fake news,” “dishonest media” and “enemy of the people,” he polarized the country into not only dismissing particular news sources, but creating new ones in their place.

At first, it was Fox News that allied themselves with the Trump narratives, repeating the big and small lies of his campaign and first years in office. Whether it be the size of his inauguration ceremony, his economic accomplishments, or executive orders, everything was bloated, hyperbolized and fed to his base as the “greatest in American history,” the “biggest in American history,” and the like.  This includes the lie that Trump’s administration has done more for Israel than any past president, and of course the lie that the US military was underfunded. This rest of the country and the rest of the world, laughed at the absurdity of these claims by the president, including when the UN audibly laughed at President Trump’s words: “In less than two years, my administration has accomplished more than almost any administration in the history of our country.” Of course that wasn’t so, but by that point his base had created an alternative reality that everything the president said was true, and any retort was “fake” or because they “hated” him.

By the time even Fox News fought back against the ridiculous and dangerous claims Trump began to make with his new freedom of absurdity, networks like NewsMax and OANN had already taken its place. Online sights such as 4Chan, Parler, and even mainstream ones like Twitter and Facebook had created a base ripe for conspiracy theories, including the QAnon cult, and other fringe elements.

A complete distrust of any dissenter came next, whether it be the judges, Supreme Court, attorney general, GOP representatives and senators, right up to the vice president. The result was four years of gaslighting a powder-keg when Trump lost the election. The idea of fraud was an easy one for 70 million Americans to buy, after so long of hearing that Trump was the eternal victim, that the Mueller report was a “hoax,” a failed attempt to remove him from office after impeachment, and more legitimate concerns of Trump’s finances and behaviors labeled as a “witch hunt” (of course the hyperbolized, “greatest witch hunt in history).

The riot, insurrection, sedition, and domestic terrorist attack on the capital last week was the culmination of these four years of a charismatic dictator and his outlets and allies creating a completely separate reality from our own. Their calls to hang Vice President Pence, to kill the Democrats (and Republicans) who certified the vote were real. Their beliefs that Joe Biden is a secret pedophile controlled by China, of course, are not.

Today, much of America is waking up, shaken, having not seen the danger of birth of this American National Cult. If one checks the alternative news sites and message boards, the QAnons and Trump supporters still await their day of reckoning, as typical cults await their days of Armageddon. This is no longer a laughing matter. The people who are stuck in this cult must be rescued out or pulled out by force.  Our nation is infected with over 70 million cult members, enough to shake the foundations of our democracy, change the layout of our government (with some already infiltrating congress), and put our true reality in danger.

The truth is, we don’t know if we will recover. But a  second impeachment of Trump is not enough, and there is nothing “unity and healing” will do to help this tragic turn of events in our country’s history.