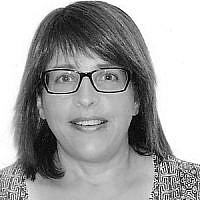 The Blogs
Lisa Stepner
Apply for a Blog
Advertisement
Please note that the posts on The Blogs are contributed by third parties. The opinions, facts and any media content in them are presented solely by the authors, and neither The Times of Israel nor its partners assume any responsibility for them. Please contact us in case of abuse. In case of abuse,
Report this post.

Anyone who knows me knows that I love wine and ice cream, though not necessarily together. I love dry, semi dry, red, white, and rose wines. I drink wine with dinner occasionally, I’ll drink to toast someone’s accomplishments, I’ll drink wine to celebrate a joyous occasion and, sometimes, I’ll drink it to soothe my nerves. I do try and consume ice cream less frequently, on special occasions only, lest I find myself losing forever the battle of the bulge. But this Shabbat, I’ll have both and damn the consequences.

I am never ready for Shabbat on time. I rarely set the table on Thursday night but last night I did. We were to have all army boys for Shabbat. My two sons, the older in Miluim (reserves) who hasn’t been called up yet, and the younger, actively serving, and two others, one a friend of my nephew, and one a friend of his. At the start of the ground operation last night, one boy notified us he wasn’t coming. I was still hoping for a Shabbat with my boys and the other soldier.

This morning, after waiting for a few hours, my younger son called to say news wasn’t good. He was informed that he and the others in his unit have to stay on base to be prepared for anything. I’m so disappointed. But I didn’t tell him that. I can’t tell him that.

I did offer him oodles of motherly love and words of encouragement. I told him to be alert, attentive and vigilant in whatever he does. I offered him all the strength and reassurance a mother can give, should give, and must give to her children. I didn’t have to offer inspiration. He has that. I told him that I’m extremely proud of him and that I love him loads and loads. I told him I made all of his favorite foods, including the chocolate chip cookies he craves and was to take back to base to share with his comrades, and his favorite cranberry-apple-oatmeal crunch. I told him that I’ll save it all for him. I sent him hugs and told him this is what he’s training for, and I tried my best to reinforce his very solid sense of duty, of conviction in his mission, in his service for his country and his people and his God. I sent him a teddy bear hug from the distance.

And now I have to remove his place setting from the Shabbat table for this Shabbat.

It is surreal, really, to listen to music on the radio and have constant interruptions notifying of an ‘azaka’, a siren, somewhere in the country. I haven’t heard a song completed without such an interruption in many days. Today on army radio, army songs and songs of comfort and inspiration are being broadcast with mothers and fathers of soldiers serving in this war telling their children’s’ stories and expressing wishes of God speed and success for all the IDF.

I am OK. I will be OK. We all will be OK. We have to be. We’re a strong, brave, resilient lot, who’ve raised an army of strong, brave, determined young men and young women. I will calm my nerves soon with a large, creamy, decadent bowl of delicious, (American) ice cream, followed by a large glass of soothing, relaxing, and calming red or white (maybe both?) wine. Neither is good for my figure, but they are both SO very good for my soul.

God speed to our soldiers, both active duty and reserve, regular soldiers and commanders, infantry, air force, artillery, navy, tanks, intelligence, engineering corps and supporters of the fighters, and all others who are literally on the front lines guarding and protecting us. May they and we, all of Israel’s citizens soon return to our normal lives and may we all enjoy ice cream and wine together in times of joy.

About the Author
Lisa made aliyah from West Hempstead, New York in August 2009 to Maaleh Adumim.
Comments