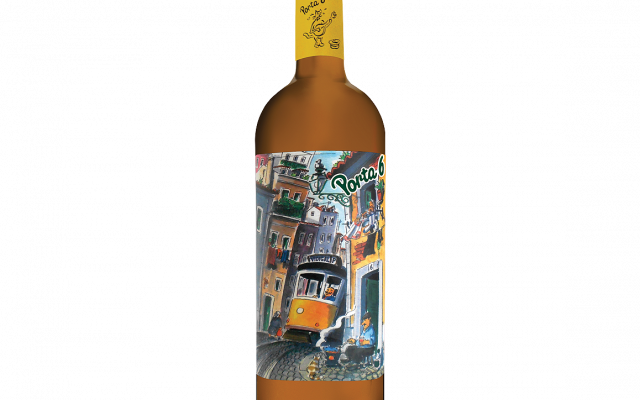 Vidigal "Porta 6" 2019 (Vinho Regional Lisboa, white). Image courtesy of the Vidigal website.
Portugal is a conundrum (a puzzle) in the wine trade.  A country part of Mediterranean Europe without an inch of coastline on the Mediterranean sea itself. A country with a wine culture as venerable as any in western Europe yet often disregarded. A country with a centuries-long history of wine production that finds itself competing with new world and old world “upstarts” from Chile and Uruguay to Greece and Georgia (the country). If a country had a voice we might hear Portugal shout “Hey, what about me?”

To be fair, this situation applies to the dry wines of Portugal.  The famous sweet wines, Port, have long enjoyed a pride of place in the wine trade and their history is well-known. But these great wines are a kind-of English invention.  Deprived of their usual source of wine in France during the late 1700s due to the war of Spanish succession, yet another among the endless wars with France, English wine merchants turned to Portugal as a source of supply.

Port wines, with their high alcohol (around 18% as contrasted with dry wines whose alcohol levels are around 13%) survived the ocean transport better than dry wines and so found eager and appreciative drinkers in England.  To this day, many Port wine houses are owned by English families and England is one of the top markets for high-quality Port. The French drink a lot of Port too but prefer the simpler styles as an aperitif before the meal while the English like the vintage wines after the meal. So the French-English “wars” are now at the table rather than on the battlefield (although Brexit might be considered the latest tug-of-war across the channel).

This predicament (for the dry wines) has an upside for wine drinkers: Portuguese wines offer excellent value!  A case in point is Vidigal “Porta 6” 2019 (Vinho Regional Lisboa, white). Vidigal is a dynamic wine company, just over 100 years old located near the city of Leiria, about an hour north of Lisbon.  Blended from an intriguing mix of equal parts Arinto, Viosinho, Viognier and Chardonnay (native and non-native varietals), Porta 6 is dry, delicious and refreshing with the vivid fragrance and flavor of lemons, melons and green apples.  The label, designed by Atelier 49, is, to me, absolutely charming and depicts the yellow tram in Lisbon at Porta (door) 6. The wine is widely available for around 50 NIS in Israel, $12.00 USD and around 10 GBP.
Salud, Bonne Sante, In Good Health, לחיים and, this week, Saude!
About the Author
Martin Sinkoff is a (still new) Oleh Hadash in Israel (almost two years). He lives in Tel Aviv. "I have had a long and successful career in the wine trade in the United States and France. I have lived in many places in the United States, including twenty years in Dallas, Texas (which I loved). I moved to Israel from Manhattan (where I was born). I am a past president of Ansche Chesed in New York and an active member of Kehilat Sinai in Tel Aviv. And I am an avid reader of Torah. You can read more about me on my website www.sinkoff.com." My writing reflects two of my passions: Torah and wine. The background photograph is a view of vineyards in the Judean Hills wine growing district of Israel, one of Israel's best appellations.
Related Topics
Related Posts
Comments