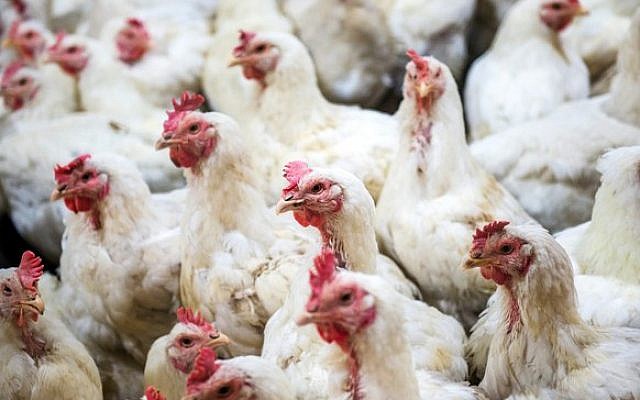 The scene: the local market. “Chicken without antibiotics, good for you”.  He takes out the literature to prove it.  I call home. “For the soup, fine”.  The sale: 5 kilos for 40 shekels. Sounds cool. Approaching the freezer now, closely examining the chicken, and there THEY are, in all their shining glory. Have you ever seen 5 kilos of chicken wings all at once?

Suddenly I see all those poor chickens squawking without their wings. Or my fantasies about learning how to fly. When I was young I imagined flying over the beach, playing catch up with the seagulls, which my father said were Jewish birds…I would fly up, around.  But here I’m in a local market looking at 5 kilos of wings we are about to eat. I stuff them in a bag, and barely looking go to the counter. The phone rings: “Don’t forget the garlic”. Ok. Over to the veggies, the garlic says: “made in China”.  Why? The grocer says, “That’s all I’ve got”. So why does Chinese garlic spook me? I buy it anyway and start to go home. On the way I notice they are oozing juice, which by some ill fate lands on my pants. People stare. I exit.

Who can eat 5 kilos of wings? Oh, those beer guys watching the Super Bowl. But why do they call them Buffalo wings? I suddenly got sad, because not only are the wings dead but they are somehow about to mate with an endangered species, or even better, conjure up a new rare breed of Minotaur, buffaloes with wings.  No wonder the cowboys went semi-nuts on the prairie, with their one-octave harmonicas and nothing to do but ride by day and stare into the empty campfire light at night.  And why did they call him the “Lone Ranger”?  It must have been real hard out there on the prairie, eating baked beans every day from a can.

Yesterday B & M advertised canned bread. My cousin Charles says its real tasty.  In colonial times apparently it was a delicacy. Not sure where they got the name B & M but will not extemporize.

Being a pioneer on the plain must have been lonely.  As a kid my truest loneliness came Saturday morning watching the end of Roy Rodgers and Dale Evans; they’d sing and play “Happy Trails to You”…and I’d get all sad and misty that my favorite program was ending.  There at five years old, little did I know it that I was having my first epiphany that eventually I would die.  That everyone dies.  Sometimes I even cried.

Unfortunately, a number of close friends have passed away.  And still my mind goes back to Roy Rodgers, sitting alone on the prairie, riding away towards the setting sun.  Inside, we are all five year olds at heart.

The first time I saw people wearing wings were those early TWA stewardesses, finely groomed, so proud, mounting a clunky propeller plane toward journeys around the world.  My brother and I once went to the cockpit and actually got some wings.  But not 5 kilos of them because the flight was seven hours long, and besides, the wings would start to smell.

Oh, how I wanted to fly.

The man who handed me the bagged wings said, “Enjoy!” He is so entrepreneurial.  Just yesterday he sent a What’sApp quoting doctors about the mortal dangers of antibiotics in chicken.  I thought, “Well what about those poor chickens with antibiotics stuffed down their faces?”

My brother is a genius, an engineer and inventor with many patents.  Once we fantasized about a personal floating device housed in a briefcase.  When the Segway came out he said “They stole our invention”.

Wings, those scrawny little things.  Lost my appetite.  But I lug them home.  Then the question: “To freeze or NOT to freeze?”

Outside my window a flock of doves and pigeons (hard to tell the difference) are having fun.  Suddenly a bright green Brazilian parakeet swoops down.  He’s just showing off. The other birds are unimpressed. We take the miracle of flight for granted.

Come, tell the truth! Wouldn’t we all LOVE to fly, to close our eyes and imagine relocating ourselves somewhere else.  Where?  Me, I’d like to see Kyoto, to land in some magic garden, with only the sound of fountain water surrounded by gentile gardens of stones to help me meditate.  Then I’d fly to Balboa Gardens in San Diego, then take a glimpse of the Grand Canyon, onward, seeing an old friend Michael who has a cattle farm in Redbluff CA and is a real cowboy, then on to see Aunt Ruthie in New Hampshire; her claim to fame: she was the only substitute teacher in the world who was adored by students. Actually, she taught many famous comedians. Adam Sandler attributes his success to her believing in him, when others cast him out as a “loser”.  Same with Sara Silverman, though I haven’t yet verified that fact empirically.  Then I’d fly to Iceland as long as my wings were not frozen (shall I put them in the fridge or freeze?).  Of course, on to Paris to see friends: Pascal the painter, Benoit the composer, and others.  Paris, the enormous playground for artists.  Then, onward and upward to see the Northern Lights, aurora borealis, down to see my grandmother’s grave in Sedilkev, Ukraine, as long as the fighting has stopped, then to Aegina Island off the coast of Piraeus in Greece to see an old friend Athanasius who believes in the Pre-Socratics and their infinite wisdom connecting mind to body.

After that first round of flying, I’d come home to a plate of my wife’s winged chicken soup which I love…but love much more than my grandmother’s which had great taste but creepy content: one day I made the mistake of lifting the lid and seeing two huge chicken feet staring out at me.  Can you imagine WALKING from Israel to Japan, then to San Diego, New Hampshire, Iceland, Paris, Finland, Greece..all by FOOT?

The soup tasted great. So did the wings.  But I am a little sad. Winter is coming. the heaters are blaring.  I have insomnia. It is after 2 AM here in the holy land. The moaning fridge won’t allow me silence.  So I contemplate my next flying adventure to far and distant places.  Maybe I’ll even pack a few wings.