Good morning everyone. I trust you all slept safely.

I know that those of you who live just south of me got incoming rocket attack warnings. I hope you and your families were not too traumatized. It is always frightening when you hear that alarm (which I haven’t heard, personally, since last year’s war) but even more terrifying when it invades your sleep, ejecting you from your bed to hit the ground running. Even more profoundly so when you have to grab your child on the way to the safe room – or help your elderly mother, or handicapped teen, with less than 10 seconds till impact.

The odds that the rocket will actually hit your house are not really that high. But after last summer, after the deaths of my friends and neighbors who were killed by a mortar on the last day of the war while fixing the electricity tower, I don’t like playing the odds game.

My children were all born and raised here. My youngest daughter is especially fearful about living in this region – fearful about rocket attacks and infiltration. That fear was present even before the tunnels. Ever since she was about nine-years-old. When she announced her impending marriage, I was thrilled, yet sceptical that they would settle here. Even though her husband was born and raised here, on Nirim, as well.

This brave child of mine has actually decided to make Nirim her home. She is now the mother of a gorgeous 5-month-old. Together with giving birth, bringing into this world a precious new soul that needs to be kept safe from the rockets, she gave birth to an ever more acute need to keep her world and those around her, safe. She’s doing great — baby steps get you there in the end. 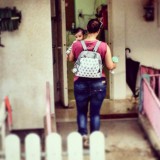 Early yesterday evening, she sent me a WhatsApp message, asking me to close my saferoom iron window and sleep in there last night.

I wanted my bed.

I wanted my two open windows, with the newly-fresh cool air (after the long, stifling hot summer) streaming through.

I wanted to refuse to give in to the fear.