Modest. Quiet. Damn cold. This is Finland on the last Friday in January: a Lutheran wonderland. 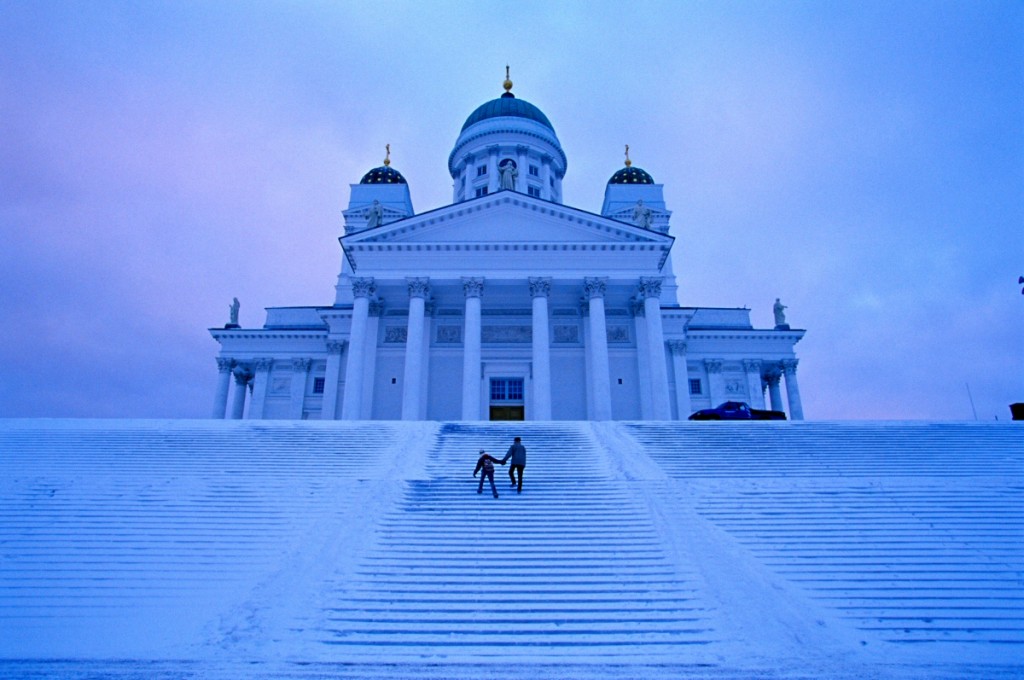 Warm, Catholic and catholic, cacophonous as an aviary. That’s the book-lined Dominican residence in Helsinki on the same evening.

And there am I under a library ladder, a friar among forty incongruous souls, trying to infuse Maimonides into the Finnish air. No one called me out for wearing the habit of Torquemada while running slides of the turbaned genie from Cordoba and Fustat — but I felt positively subversive. 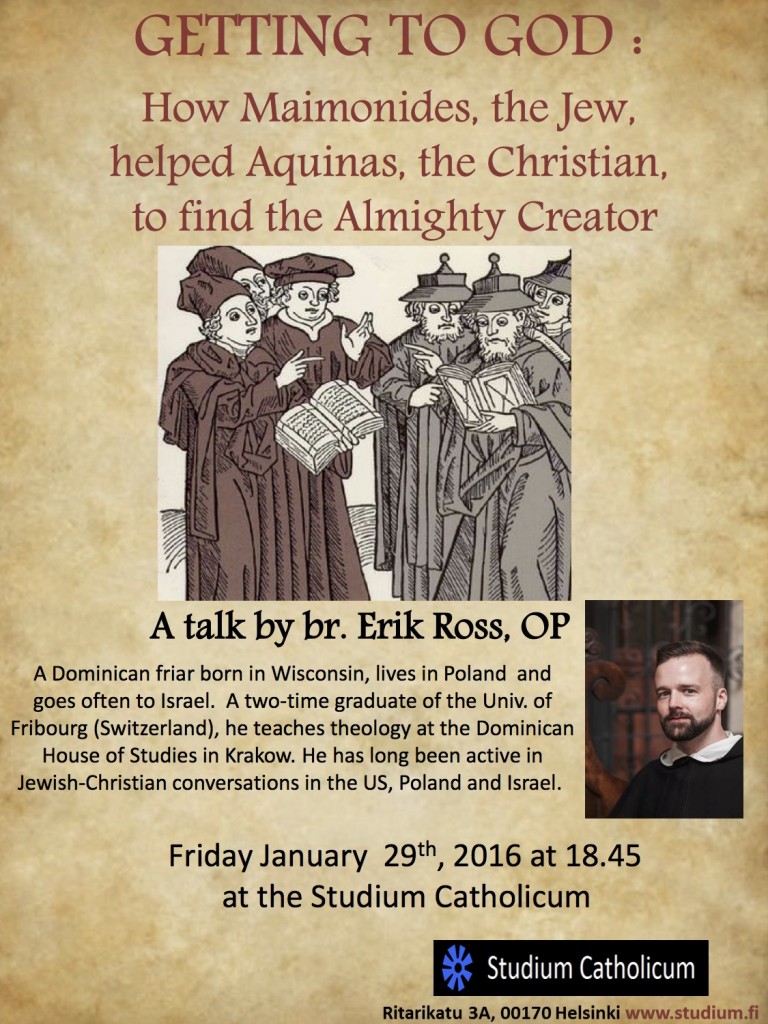 Of course, Maimonides himself was subversive.

The Rambam was an object of obsession as I sat in my cell in Switzerland these past three years. Now that I am stationed back in Krakow, theses written, he stays with me — for his own brilliance, but also because of what he represents in a Catholic (and Dominican) context.

Maimonides has sneaked his way into the heart of hearts of Catholic theology, and few Catholics are the wiser. I like sneaks and spies and breakers of borders, so I was delighted to expose the work of Maimonides under cover of snow and night. 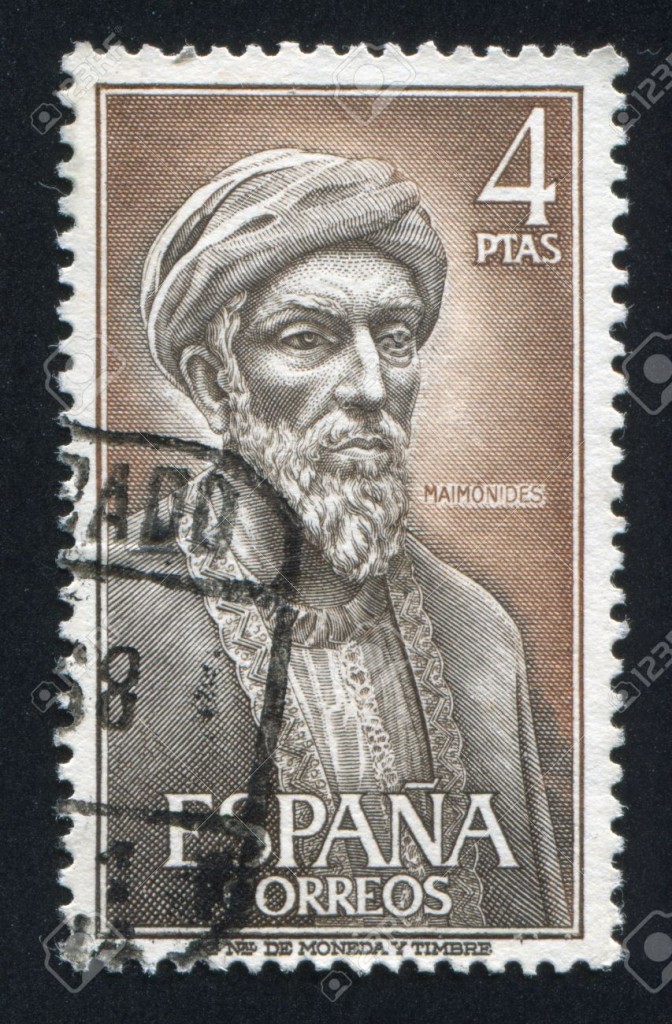 Maimonides on a Spanish stamp (1960s)

What I let the people in Helsinki know was this: woven right into the work of the greatest Catholic theologian, the thirteenth-century Dominican Thomas Aquinas, are dozens of explicit references to “Rabbi Moise” — Rabbi Moses. 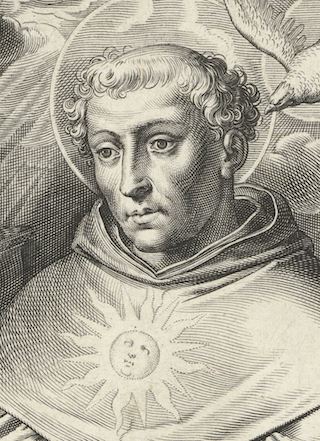 Thomas Aquinas by Cornelis Boel, detail (17th c.). This image is in the Rijksmuseum in Amsterdam.

But, most interestingly for educated Catholics, the friar cites the rabbi in the Summa theologiae — a book-of-books for traditional Catholic Godtalk. The Summa, a theological compendium, is the root of everything from hymns about the eucharist used at Mass to illustrated textbooks for children.

Maimonides, who died about 20 years before Aquinas was born, is mentioned by name in 22 instances over the three parts of this Summa.

Evidently, Thomas devoured the Guide in its Latin translation. (When you can’t read the Moreh Nevukhim, try the Dux perplexorum. All I could do was bumble through parts of it in English.)

Aquinas does not, however, explicitly mention Maimonides in Summa I 2, 3, where the “Five Ways” are given.

What are these “Five Ways”? Five logical demonstrations of the existence of God. Light stuff.

And four of the five — four of five! — of the Ways of Aquinas are present in the Moreh Nevukhim (see Guide 2.1).

In our time, this passage of Thomas may be the most written-about part of the whole Summa.

This is due in part to the fact that, to contemporary ears formed by modern science, the idea that someone could try to prove the existence of a God invisible and untestable by any scientific method seems perverse.

But the Five Ways are not “proofs” in any sense that Bacon or Newton would have meant. They are demonstrations through reason (reason: the great byword of Maimonides) of the possibility and indeed the probability of an unseen God.

They are a powerful cry against obscurantism and dumb belief, yet many have come to believe through them. They are dangerous. They are treasures. Like peacock feathers, the Catholic theologian plucked them, iridescent, from the rabbi’s Wunderkabinett.

Now try telling me that Jewish-Christian dialogue is eccentric, peripheral, and a modish innovation — that real exchange of ideas between Jews and Christians ended in the first centuries CE.

As they say in Finnish, Phooey!

Maimonides and Thomas tell another story.

I am not, lest you suspect, the only one to notice this. Of the dozens of books on this connection, I heartily recommend the works of Zevi Diesendruck, Shlomo Pinès, and Avital Wohlman.

But in my research, one writer on the Rambam and Saint Thomas won my respect. He is not the most famous or the most exhaustive in his analysis of these ancient ways to God. But the man’s got heart.

I found him by chance.

One day I sent in a round of requests to our hyper-efficient Swiss library and, exactly 30 minutes later, retrieved a stack of cloth-bound tomes with, on top, a dog-eared brochure.

Composed on some sort of linotype, the yellowing booklet was less than 100 pages long. This was an artefact from from 1947. Inside, it bore purplish stamps from the Hebrew University. It was a digested presentation of the doctoral thesis of one Louis C. Gerstein of Brooklyn, originally submitted at NYU in 1943. Shiver.

As I turned the wilting pages, I thanked God for Gerstein.

A little Internet searching shows that Gerstein (1918-1996) was from 1956 to 1988 ‘minister’ (leader) of Shearith Israel in Manhattan, a Spanish and Portuguese congregation established under Dutch colonial rule in 1654. As far as I can tell, his descendants live in Israel.

The Gerstein I know from this small document is a fighter and a mensch.

Creating a small scholarly monument in a year of destruction, he saw what I have come to see between the Rambam and Aquinas. While Jews were being trampled, Gerstein trumpets. He’s a Jewish booster and unashamedly Rambam-centric. According to Gerstein, the proofs of God recorded by Maimonides are not only the inspiration for Aquinas’s Ways, but the key to understanding them.

Gerstein shows the Rambam breaking with the accepted practice of his time, in which Jewish and Muslim scholars avoided the Greek (Aristotelian) model of an eternal universe in fidelity to the biblical (or quranic) doctrine of creation.

Maimonides rejected proofs based upon creation as unsafe. This is because he saw creation as un-prove-able. To him, the notion of infinite time was, if not proven, at least conceivable; creation, as an event in time, could neither be proven nor disproven.

It was not wise, then, Maimonides thought, to link the existence of God to the fact of creation. But by accepting for the sake of argument aneternal universe, like that imagined by the Greeks, the Rambam could avoid the problem of proving creation completely and focus on — merely — proving God.

This move was innovative, transgressive, intellectually rigorous and — if I may say so — Jewish meod.

And as Maimonides did, so did Aquinas after him.

Gerstein says there is no plausible way to understand Aquinas’s adoption of the ‘eternal universe’ hypothesis in one of his proofs without acknowledging the hand of Rabbi Moses.

I think he has me convinced.

So there I was in Helsinki, a city white and chilly as bathroom tile and goyish meod.

And as I rounded the podium and flipped my slides and enunciated “Aristotle” and “God” and “Cordoba” — I swear I heard a click.

It was the sound of a gaggle of wind-chilled gentile brains — and maybe one or two Jewish brains, too — making a radical connection.

As much as we may ruminate and fulminate and quack and quarrel, as much as we hem and haw, there is no way to push the Jewish gene out of Christianity. Even the destruction of the Temple and the Great Exile and the Grand Inquisitor couldn’t keep our theology in cling film.

Right in the heart of the greatest work of our great Catholic theologian is the hand of Rav Moshe.

And, from my point of view, it was meant to be so.

Christians and Jews share a sacred impatience — a red-hot yearning to get to God.

If a rabbi, be he from Cordoba or Cairo or Brooklyn, hovers closer than I to the intoxicating effulgence of the Almighty, no Catholic can — no Catholic should — resist the urge to grab for his tzitzit.