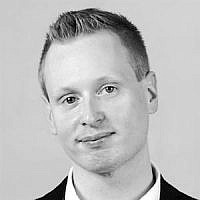 The Blogs
Gabriel Rosenberg
Apply for a Blog
Please note that the posts on The Blogs are contributed by third parties. The opinions, facts and any media content in them are presented solely by the authors, and neither The Times of Israel nor its partners assume any responsibility for them. Please contact us in case of abuse. In case of abuse,
Report this post.

The World Jewish Congress urges the UN Human Rights Council to end the double standards and remove Item 7, the only permanent agenda item which singles out and condemns only one country, Israel.

The World Jewish Congress enlisted the help of its flagship program, the WJC-Jewish Diplomatic Corps (JDCorps), to attend last month’s 34th session of the UN Human Rights Council in Geneva.

The JDCorps is a worldwide network of outstanding young Jewish professionals who voluntarily engage in diplomacy and public policy. It now comprises a cadre of some 200 professionals aged 27 to 45, from more than 40 countries.

My statement, in its entirety below, was delivered on March 20, 2017, under agenda Item 7 – the only permanent agenda item at the UN Human Rights Council which singles out and condemns only one country, Israel.

Since its establishment in 2006, the UN Human Rights Council has condemned Israel more times than the rest of the world – combined.

How is this possible?

Israel is a vibrant democracy that embraces democratic values such as equality, freedom, justice and peace. There are many dictatorships in the world, but still, in this Council, Israel is condemned more often than all of them – combined.

Christians in Israel are flourishing, while in some other Middle Eastern countries, they are on the verge of extinction. Despite all this, Israel is again and again condemned more times than all other countries in the Middle East – combined.

Secretary-General Guterres said just a few weeks ago that “the integrity and credibility of this Council will only be enhanced by proceeding in a manner that avoids unbalanced treatment of Member States.”

Item 7 is the only item at the UN Human Rights Council which singles out and condemns only one country, Israel.

The World Jewish Congress therefore urges this Council to end the double standards. We call once again for the removal of Item 7 from this Council’s permanent agenda, and for Israel to be considered, like any other country, under Item 4.

About the Author
Gabriel Rosenberg is a member of the Jewish Diplomatic Corps, a flagship program of the World Jewish Congress, and a board member of the Zionist Federation of Sweden. Photo by OSCE / Misi Kondella.
Comments