When I visited Israel for the first time, an 18-year-old on “machon” for leadership training for my Zionist youth movement, Beit Hatfutsot, recently re-opened and renamed “ANU – Museum of the Jewish People,” did not exist.

In Israel many years later, after the museum had opened, as a delegate to a conference on Jewish education, we engaged in a discussion about the significance of the museum, which gave legitimacy and even importance to Jewish life outside the Land. The name itself conveyed a message – “tfutsot” not “galut.” The idea of having a place in Israel that focused on Jewish life outside the Land was radical and challenging.

The founders of the museum, especially Abba Kovner and Nahum Goldmann, were passionate Zionists who wanted Israelis not to forget the lives and creativity of previous generations of Diaspora Jews. At the same time, they offered a tourist attraction for Jewish visitors to see themselves through Israeli eyes.

The most memorable part of the old museum was the display of different synagogues from around the globe, which brought home the message of the diversity and artistry of the Jewish people – perhaps ironical, considering the strong connection to the secular Hashomer Hatzair movement of the museum’s founders. The message was that Judaism outside Israel had been primarily centered around religion, whereas here, in our homeland, there were so many more options for self-expression and definition. This exhibit also gave me a sense of loss. Few of the model synagogues on display still existed in reality.

The relationship between Israel and the Diaspora has changed dramatically over the lifetime of the museum. When it opened, Israel still relied on Diaspora Jewry for financial and political support. Israel provided proof of Jewish resilience – the response to the Shoah; the epitome of “never again!” It was a refuge for those fleeing antisemitism and a place for sturdy and determined idealists to demonstrate that they could sacrifice comforts and material opportunities for a higher cause. Now, the relationship is stronger but different. Israelis live affluently and Israel provides Jewish education, Hebrew culture, not to mention hi-tech and all types of innovation, to Jews and non-Jews. It is also a “source” of antisemitism – an instrument that anti-Semites use to “prove” their vile slanders against Jews. In some ways, the roles have been reversed.

In the new relationship, we see the wisdom of the museum’s founders. Whereas it was once possible for Diaspora Jews to separate themselves from Israel or see it as an object of their charity, it is much more difficult now, when nearly half of all Jews live here. Israelis once thought nothing of value for Jewish continuity and no Jewish creativity came from elsewhere. Most Zionists once imagined the natural end of the Diaspora; many Jews in the Diaspora were once skeptical that Israel would survive. I think it is fair to say that none of these ideas was correct.  ANU legitimises and celebrates Jewish life, past and present, in all corners of the globe, while still holding Israel in the centre.

When recently I visited the museum for the first time since its revamping, it did not let me down in its depiction of Jewish diversity. I was impressed by the museology, the aesthetics, the light, the balance between static and interactive displays, the amount and accuracy of information. The model synagogues are still there but they are far from being at the centre or most memorable displays.

There was one more thing that struck me that is a feature of the new museum but was not part of the old: the strong feminist message. From the first exhibit, which has Jews of different backgrounds and beliefs, of different generations and from different places describing their Jewish identity, it was clear that this museum recognises that half of all Jews are women. 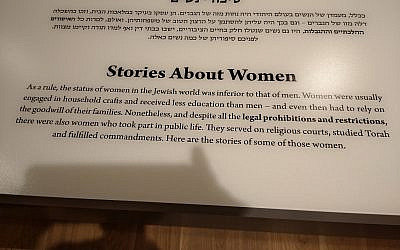 In the historical sections, where evidence about the lives of women is so much sparser than that of men, the museum articulates the question: where are the women? In its videoed re-enactments, women are at the centre and often the bearers of wisdom. In its testimonies, there is gender-balance. It is not only the relationship between Israel and the tfutsot that has changed; today, where women are not seen, recognised and celebrated, questions are asked. 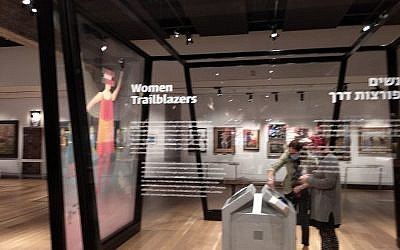 ANU does not fall short. Its depiction of Jewish life here and throughout the Jewish world tells the story. Women may not have been named or acknowledged but they were there and they shaped and continue to shape our identities.

In many ways, Israeli women are behind their Jewish counterparts in the Diaspora. In terms of women’s political representation and influence, wage parity and professional advancement, violence against women including sexual exploitation, and in the arts and culture, Israel does not do well. Jewish women outside Israel are usually better off.

In the religious arena, Jewish women in Israel also have made fewer inroads towards finding their full expression than have their sisters elsewhere (particularly in America.) (It is telling that the large screen showing different prayer services around the world features women as leaders and cantors alongside men, whereas in the video based in Israel comparing Ashkenazi to Sephardi shabbat services, only men are shown.)

At the same time, though, feminist voices here in Israel resound around the Jewish world. Women’s achievements, as well as their struggles, inspire and affect Jewish women elsewhere.

A clear message of ANU is that Jewish life outside and inside the State are intertwined and cross-fertilise each other in new and exciting ways. Women are half of the story and we can expect to share each other’s difficulties and triumphs.

ANU does not make comparisons or even suggestions. It simply paints the picture.