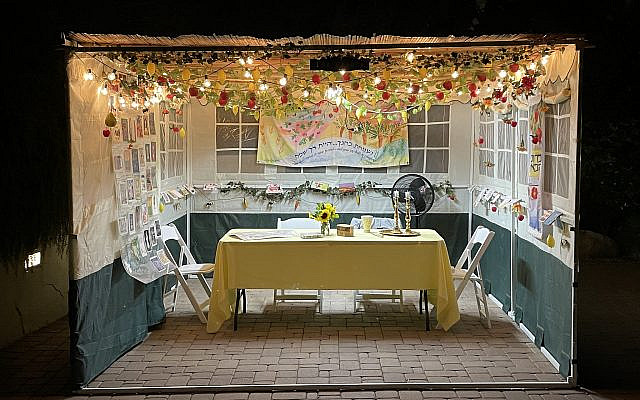 My first time in a sukkah.

I must have been six or seven, hair cut in a neat Buster Brown, dark bangs framing my eyes looking solemnly into the camera. In my hands I clutched my very own miniature Torah, clothed in satiny white with glittery gold trim.

The class photo of that day has long been lost but the memory, though blurred with time, perhaps melding with another, remains. It captures my Consecration, then a fairly new ritual among Reform Jews, marking the beginning of a child’s Jewish education. It often takes place at the end of Sukkot, on Simchat Torah, when Jews complete the reading of the entire Five Books of Moses only to begin again.

It is a beautiful ceremony, welcoming a new generation of little ones and placing tradition gently into their hands.

Clasping my tiny Torah, little did I then appreciate the magnitude of the gift nor the responsibilities it entails.

But standing in that sukkah, I was entranced by the wonder of it all.

I was taken with the flimsy dwelling, with one side left open for guests, especially the ushpizin, those who come bearing the wisdom of the past, and those who like me, would be its future.

I loved the paper chains we had cut and pasted, the loops of red berries we had strung. They swung perilously in the wind, a few berries coming loose and scattering underfoot. Overhead, the leafy roof allowed a glimpse of the heavens, the worrisome possibility of a shower if they opened, the promise of a starry sky as evening fell.

Along the walls were stacks of clumsily wrapped canned goods, peaches and pears and apricots, green beans and peas and mushrooms, brought to recall the harvest Sukkot commemorates and later distributed to feed the hungry. Little hands colored blue — mine — or pink or purple, stained from the crepe paper used to cover the gifts, a sign of our hard work and our generosity.

So it is that my memory of that very first sukkah stays with me.
And so it is decades later that we have a sukkah in front of our home, strung with raffia garlands and plump lemons and apples. Hand painted wall hangings with Hebrew lettering urge us to share in the joy of the season, colorful holiday cards from family and friends bring them near.

The roof is still open to the skies, the side open to visitors, and the twinkling lights we’ve added at night add to its aura.

Its openness evokes the immensity of human possibility, the expansiveness of divine blessing. Of what it means to be a part of something bigger, part of a family, part of a community, part of a people, part of a story that spools out from that Torah scroll. And even, to play a part.

Its spare beauty evokes hope and faith and trust, of all that we can do and be with all that we’ve been given.

And, to that little girl then, and now, the very wonder of it all.