Lots of complaints were voiced yesterday from WoW about being “caged in” at the Kotel. I thought I’d share my observations about this “cage”.

Last month, on Rosh Chodesh at the Kotel, there was a very large area cordoned off by the police, and inside there were WoW ladies, Israeli politicians such as Miri Regev, Natan Sharansky’s aide, the deputy mayor of Jerusalem, Rabbi Rabinovitch, a whole bunch of media, Leah Aharoni and I… among others. This cordon gave a place free of rowdy protesters, and gave us calm and quiet to do our thing- observe, pray, or talk to the media unobstructed, whichever we desired to do.

This month, Leah and I wanted to make sure that the media showed the voice of the vast majority of Israeli Jewish women, and not just the voice of a small group of mostly American women. The media was inside the police cordon with WoW, I tried to come in also, but the police wouldn’t let me in. I went over to the chief of police, who knows me, and knows I am a polite person, who won’t make any issues, and would disrupt no one, just would be talking to the media, as I did last time… but he wouldn’t let me in.

In other words, I tried to get “into the cage” but was forbidden. If it were a cage, would I have tried to get in and be barred? Do people ever go over to cages and say “lock me in”?

I wouldn’t call it a cage whatsoever. You know what it reminded me of? 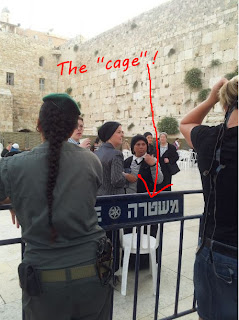 Of a VIP lounge, with bouncers, and only those they deemed “worthy enough”.

I watched Peggy Cidor and many other WoW members, who didn’t come on the WoW bus, come over to the cordon, the police parted it, and let them in.

They let the media in to the cordon.

But when I wanted to come in to talk to the media- nope.

I wasn’t “special” enough to be allowed into this “special section” with all the “notable VIPs” and “celebrities”.

When there is a special section cordoned off for certain dignitaries, being offered special body guards and police protection, that people go there by choice and ask to be allowed in, and all others are barred, that is a far cry from a cage.

No more than the first day of the President’s Conference, on June 18, opened only to registered invitees and “unregistered guests will be not be given entrance into the ICC” is caging people in the ICC.

It’s no more being “encaged” than Paris Hilton and Celine Dione being allowed in to a VIP lounge and all others being kept out by bouncers.

When people get preferential treatment, when they are given VIP treatment and body guards while thousands of others are barred from their most holy site, continuing to “play the victim” to try to garner sympathy, when the facts are against you… is not only wrong, it is sad.

If justice and righteousness and high moral ground is on your side, as you claim, there’s no need to keep on playing the victim card. Especially once you get your way, which ended up victimizing many others.

About the Author
Adara Peskin is a non conformist chareidi feminist single mother of 4 living in Kochav Yaakov, activist for mental health awareness, blogger at PennilessParenting.com about living a life with mindful spending, and foraging instructor, attempting to make a kiddush Hashem every day via her interactions with others.
Related Topics
Related Posts
Comments