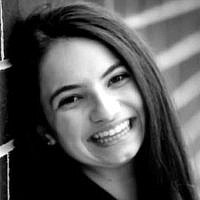 The Blogs
Shira Harris
Apply for a Blog
Please note that the posts on The Blogs are contributed by third parties. The opinions, facts and any media content in them are presented solely by the authors, and neither The Times of Israel nor its partners assume any responsibility for them. Please contact us in case of abuse. In case of abuse,
Report this post.

Less than two weeks ago, I stood in the Old City staring up at the Kotel, leading tefillah on my high school’s Senior Israel Experience. Most of the class thought nothing of it. I am a regular leader and one of the Co-Chairs of Chicagoland Jewish High School’s Vaad Tefillah, there seemed to be nothing special about that occurrence. I grabbed my tzitzit during the Shema and touched them to the box of my arm tefillin, kissed the fringes, and then to the box of my head tefillin, and realized how lucky I am.

I returned home from Israel this past Friday and my Facebook feed was overflowing with notifications and posts about and by three of my close friends who I met last summer at BIMA at Brandeis University, a pluralistic arts program. These amazing women have made the news for donning tallit and/or tefillin in the past few months.

In light of the recent influx of news regarding tefillin, my seemingly anticlimactic daily laying of tefillin seems a bit more exciting. My first thought is: why is it that there are the same number of female tefillin-wearers in several Modern Orthodox high schools as in my (and many other) fully egalitarian Conservative schools? Is it that Modern Orthodox girls are simply more engaged? Absolutely not.

The truth is, regardless of the name of the school, the denominational affiliation, or the city, there tends to be proportionally the same number of female students who are engaged in this conversation. Among this group, a certain percentage (which varies based upon the level of religious observance within the school) does not feel religiously comfortable wearing tefillin, do not feel supported by their community, or does not feel that wearing tefillin will enhance their prayer experience. Taking that into account, having three female tefillin-wearers in my 167 person school, or two at SAR, does not seem worrisome at all. In fact, we should be pleased with these statistics.

So, when I lent Eden Farber my tefillin this summer at BIMA, I did not realize that I would semi-make the news by being referred to as the “girl [Eden’s] age who identified as traditional-egalitarian” who helped her wrap tefillin for the first time, described in her ground-breaking article cleverly entitled “Not-So Blurred Lines.” I was merely doing what I’ve always been encouraged to do by Solomon Schechter, Chicagoland Jewish High School, and Camp Ramah, among many other influential institutions in my life.

Pirkei Avot 1:6 teaches to “provide for yourself a teacher and get yourself a friend.” Whether discussing the halachic implications of tefillin with my friends and teachers, or actually wearing it in Jerusalem, I have always found people to inspire and empower me to become a leader in the next generation of female tefillin-wearers.

About the Author
Shira Harris is a senior at Chicagoland Jewish High School in Deerfield, IL. Next year, she will be a first-year student in the Double Degree Program with Barnard College and the Jewish Theological Seminary.
Related Topics
Related Posts
Comments