Jacob was left alone. And a man wrestled with him until the break of dawn…Then he said, “Let me go, for dawn is breaking.” But he answered, “I will not let you go, unless you bless me.” Said the other, “What is your name?” He replied, “Jacob.” Said he, “Your name shall no longer be Jacob, but Israel, for you have striven with beings divine and human, and have prevailed.” — Genesis 32:25-30

In the past year the story of Jacob wrestling an angel has taken on particular significance to our family. That is because we have left our family and friends and moved to West Africa in order for my wife to study Senegalese wrestling. Let me explain.

My wife, Bina, is completing a PhD in Ethnomusicology combined with Linguistic Anthropology, a field I admittedly didn’t know existed until I met her. For years she has been interested in West African culture, music and traditions and in the course of her PhD coursework she became fascinated with Senegal’s national sport, the Laamb wrestling tradition.

Now you may be asking yourself: What is a nice Orthodox Jewish woman doing taking her family across the world to study wrestling?

There is a centuries old wrestling tradition in Senegal, dating back to the 1300s. Originally, the wrestling competitions were a rite of passage into adulthood for the teenage boys of the village and were connected to harvest season celebrations. As people have moved to the major cities, Laamb wrestling has become a national sport, with televised matches that are sponsored by major international companies.

What makes Laamb particularly interesting to my Bina is not the fighting, which generally lasts only five minutes. Rather, she, as well as most of the spectators, are interested in the nearly five hours of ritual and pageantry that take place before the match.

In fact, the Laamb wrestlers are not just supposed to be powerful men, they are also expected to prepare elaborate dances and songs as they are accompanied by a group of drummers and female traditional singers. 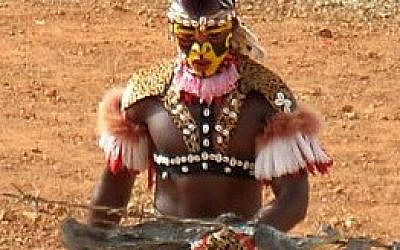 A Dancer Gets Ready for a Laamb Wrestling Match (Wikipedia)

This connects to the most interesting component of these matches: They are deeply religious ceremonies. Each wrestler has a spiritual guide called a marabout who guides them for years in preparation for their matches. The wrestlers don’t spend the days before the matches with their trainers and dieticians. Rather they spend their time in prayer and contemplation with their marabouts. 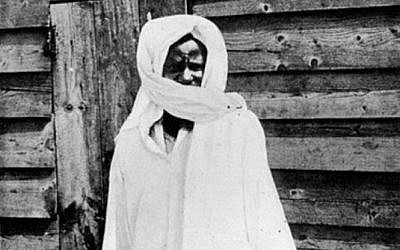 Sheikh Ahmadou Bamba. Senegal’s most famous Marabout who died nearly 100 years ago and whose face is plastered all over the country. (Wikipedia)

For the Senegalese Laamb wrestlers, wrestling is a transformative and deeply religious experience and therefore, the elaborate musical traditions that take place before the matches are not for show. Instead, they are part of their spiritual preparation for the match.

Wrestling as a religious transformative experience. That’s something a both a rabbi and an Anthropologist can work with!

Returning to this week’s Torah portion, we learn that Jacob wrestles with an angel and comes away from the experience a changed person. At the conclusion of the fight, Jacob is given the blessing of a new name – Israel – which is actually a play on the Hebrew word ‘to struggle’ – sarita in Biblical Hebrew. The struggle was so significant that it defined not just Jacob, but all of his descendants who would  be called the Children of Israel, not the Children of Jacob.

But what was so unique about this struggle?

The Rashbam (Rabbi Samuel Ben Meir who lived in 12th Century France) has a fascinating understanding of Jacob’s struggle with the angel. He connects this story to the previous chapter in which God commanded Jacob to return to the land of Canaan and to meet his brother Esau, the very same brother who once tried to kill him. The Rashbam claims that Jacob was in fact running away from this meeting, thus disobeying the word of God, which is why an angel had to stop him from running away.  The story of Jacob’s wrestling with an angel therefore is really a story about confronting your fears.

Throughout his life Jacob runs away from conflict. Whether it is with his father, his brother or his father-in-law, Laban, Jacob always prefers to fudge the truth, or simply run away, rather confront his problems. That is what Jacob was trying to do again, until he met the angel. By wrestling with him, the angel prevented Jacob from running away, and also did something more significant: He taught Jacob that he was capable of being in conflict, of addressing the things that scared him and that doing this would change him in to a different person.

Why does it take a fight for Jacob to go through this transformation? I think that the Laamb wrestling has given me an insight in to the answer. In a wrestling match you are all alone. You must rely on your own strength and courage to prevail. It is fitting that in most cultures traditional wrestling was done while naked. Even the Laamb wrestlers must leave their spiritual guides when they enter the wrestling ring alone. Wrestlers represent people at their most vulnerable and true selves.

In fighting the angel, Jacob was forced to stopped running away not just from God and his brother, but also from himself. He was forced to confront himself. Only by confronting his own fears and coming to terms with himself was Jacob able to become Israel.