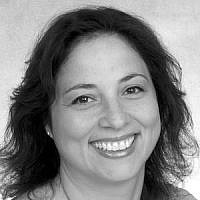 The Blogs
Iris Cohn
Apply for a Blog
Advertisement
Please note that the posts on The Blogs are contributed by third parties. The opinions, facts and any media content in them are presented solely by the authors, and neither The Times of Israel nor its partners assume any responsibility for them. Please contact us in case of abuse. In case of abuse,
Report this post.

In 2016, the Knesset passed a new bill creating Israel’s newest national holiday, Yom HaAliyah, with support from politicians across the political spectrum.

This holiday was established to honour the contribution to Israeli society of past and future Olim.

This year, shortly after Rosh Hashanah, our 20-year-old, oldest daughter, made the courageous decision to leave her carefree, comforting, and nurturing home in Toronto in order to start her adult life in Israel.

She left, despite having had a beautiful childhood, with a very close and loving relationship to her parents and siblings.

She left and had to say goodbye to very dear friends and a fairly structured career path here in Canada, to go to a country where the perspective towards life is so different to her previous one.

She left because of the values that were instilled in her from a very early age, through us, and also through the community we chose for her, such as the attendance of Jewish day schools, camps, and synagogues.

The love for Judaism and the State of Israel has been ever-present in our daily lives.

It is no coincidence that Yom HaAliyah is celebrated around the same time that we read the Parashah, Lech Lecha, the Torah portion where G-d commands Abram to leave his home and head for the land of Israel:

“Go forth from your land and from your birthplace and from your father’s house, to the land that I will show you. I will make of you a great nation and I will bless you and make your name great.”

This is the covenant or contract G-d made with Abram, our forefather, and the main pillar of the right of our Jewish existence in the land of Israel.

I am always astonished to see the Israeli flag proudly displayed next to almost all Jewish day schools or Jewish buildings here in Toronto and other cities across North America.

There is a reason why my husband and I left Germany for North America with a nine-month old baby. We wanted our children to grow up in a surrounding where dignified Jewish living is a casualness of existence without requiring any questions or explanations, and we were right.

20 years later, we are still star struck by the colourful, rich, and beautiful tapestry that defines Jewish life in North America.

But there is something to Israel, a feeling of belonging, of a life with a meaning, of living, home and hope, of being a part of something that is bigger than oneself, as if it is engrained in all of our DNA.

Sometimes, we ask our children silly questions, such as, “Which parent do you like more?”

Well, the answer is most often this, “I love my parents equally, both in their own way, appreciating and enjoying individual attributes from each one, while criticizing others.”

SimilarIy, I believe that there is no contradiction to the fact that you can be a proud and active citizen of one country, while at the same time pledging allegiance to the State of Israel, may it be emotional, financial or both.

We, the Jews outside of Israel, the Diaspora, feel connected to Israel and are not shy at exhibiting it.

Our daughter took this a step further and decided to make Aliyah, undeterred by her and our fears.

We fear for her that facing mentality challenges, the political atmosphere, and the reality of living in the Middle East might be frustrating at times.

We fear for her that she has to live in a country that is surrounded by enemies, causing her to live under the constant threat of random terrorist attacks, rockets, and war.

We fear for her that this move will limit her career options and that she will not be able to make a living in Israel without our assistance financially. She wants to become a physician and let’s face the fact, life in Israel is physically, mentally, and financially much harder than in North America.

A lot of things will be unknown to her, sometimes outright scary, but she decided that Israel is the place she wants to be and we support her move.

We support it, because our daughter will now be a part of another beautiful and successful Jewish tapestry, the Israeli society.

We support it, because, although Israelis are sometimes harsh, very straight forward, and in the eyes of North Americans, tactless, there is a love and care for each other that can’t be found anywhere else.

We support it, because her wonderful aunts, uncles, cousins, Savtah, and her extended family, who love her dearly, surround our daughter.

We support it, because Israel is our Jewish homeland and there is so much more that has to be done and achieved in order to continue Israel’s success story.

We support it, because we believe that our daughter will make her mark in her new home with her multicultural upbringing and “I don’t take No for an answer” mentality.

She is now continuing to study Life Sciences at Hebrew University in Jerusalem and turns out she has to learn everything in Hebrew.

She runs around with a notepad, so that every Hebrew word she does not know or recognize is penned down for her to review and memorize at night.

And we are certain that in a couple of years from now, her younger sister will follow suit with a move to Israel.

A lot of people ask me, “How are you doing? How do you feel?”

My answer is always the same; after all, we raised our children to be proud and knowledgeable Jews with a love for the State of Israel that until in recent history was an unattainable dream for so many of our family members.

As a matter of fact, we all, the Diaspora and Israel, take part in a nowadays-Jewish narrative that is thriving, happy, proud, intertwined, and unified, despite some significant disagreements along the way.

Hopefully and G-d willing, our times will be described in the history books as the “Golden Age” for the Jewish people.

Therefore, I am grateful, but I have a suggestion, maybe we should change the name of this new holiday from Yom HaAliyah to Yom HaAliyah Ve Ha Diaspora to represent our unity, strength, and resilience as a Jewish nation.

So my heart is heavy, but my mind is proud!

About the Author
Born and raised in Frankfurt/ Germany, Iris and her husband moved to the USA in 1998. She is a mother of 3 children. She is licensed pharmacist and currently works in the field of pharmacogenomics. Since 2012, she resides in Toronto with her husband and her children.
Related Topics
Related Posts
Comments