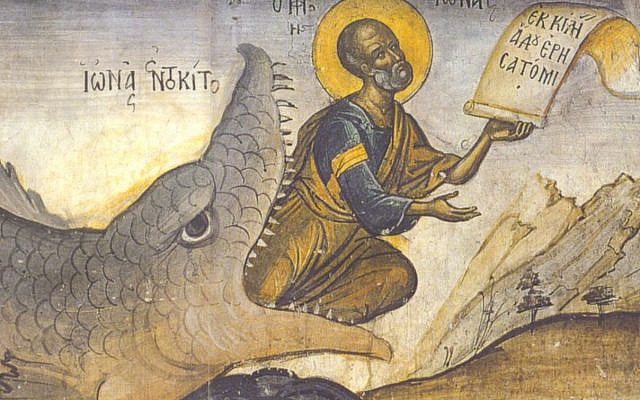 There’s a daunting aspect to life. You are the one who needs to make decisions, and you are the one who faces your consequences. It comes with complete control and complete responsibility. Whether that’s good or bad depends on the person. The onus of living life can feel empowering or debilitating, and it’s something everyone experiences at some point in their life. On Yom Kippur, we read about the prophet Yonah, a figure whose story dealt with this very challenge.

Sefer Yonah begins with Hashem directing Yonah to go to Nineveh, a large and important city, and warn them that, unless they end their wickedness, they will face destruction. Immediately, Yonah runs in the other direction, boarding a ship of sailors to escape his calling. Hashem sends a great storm that results in the crew members throwing Yonah off the ship, at which point he’s swallowed by a big fish. After three days and nights of prayer and reflection, Yonah is spat out onto land, and he finally goes to Nineveh, delivering Hashem’s message to them. Surprisingly, the king and his people repent — and Yonah is disturbed by it. He runs toward a new city and finds comfort in a plant with shade, which Hashem destroys and Yonah, in response, begs for death. The story ends with Hashem challenging Yonah of his values, asking him how he can be so sympathetic toward a plant but feel so repelled by the idea of helping Nineveh repent.

The perplexity of this book is not to be taken lightly. From the overall plot to the specific details, perhaps the most confusing thing is trying to figure out where to begin in peeling back its seemingly endless layers. That said, one theme that prominently stands out in Yonah’s story is his aversion to being a prophet, a role of immense esteem and influence. Why would a prophet, someone clearly of holiness and high stature, both believe they could run away from Hashem and try to do so? Why does Yonah’s character read more like a deeply insecure, imposter syndrome-driven person?  In Dr. Erica Brown’s “Jonah: The Reluctant Prophet,” she offers a profound understanding of Sefer Yonah that adds great depth to this discussion.

The entire book is filled with challenge, struggle, insecurity, and so much failure. It clearly differs from the generic story of a prophet, one marked by obedience and a willingness to step up when called to task. Dr. Brown notes that in the rather short Sefer Yonah, totaling 48 pesukim (verses), the most frequently used word is gadol, translating to “big” or “great.” It is used to describe the city of Nineveh, the storm that Hashem sends, the fish that swallows Yonah, among other examples.  Dr. Brown suggests this language mimics how Yonah viewed both himself and his situation. “To Jonah,” she writes, “who was trying to escape forces larger than himself, everything appeared as an overwhelming taunt to his powerlessness” (xxiii-xxiv).

Such an idea is jarring. Yonah, someone who reached the heights of prophecy, fell into a downward spiral that worsened by the pasuk. This, perhaps, was motivated by Yonah’s perception of it all, the pestering thought that “It’s all too big, too much — for me.”

Yom Kippur is a day that rebuffs this idea. Sometimes we see ourselves like Yonah. Getting out of bed, meeting deadlines, living lives we love, being our best selves — it can all feel scary and unnerving. While life seems to be towering over us, but that’s only because we’ve forgotten to stand tall. Yom Kippur is the fresh start we need to move forward. Even if we’ve flopped, fallen, and failed, now we can set it all right. Life may seem big, but we, too, are big. We got this.