“I met with an individual with a tour guide in Israel; I had no idea of his political affiliations.” So said Florida State Senator Dwight Bullard after he met with the Popular Front for the Liberation of Palestine (PFLP) on a trip this past May to territories under Palestinian control. PFLP is an organization listed by the State Department since 1997 as a foreign terrorist organization. Bullard was photographed with a member of the PFLP, and those images were shared on social media and used to further their anti-Israel propaganda.

Do you believe him? I don’t. Are we to believe that a Florida State Senator happened to travel to Israel with the “Dream Defenders?” without realizing their “political affiliation? The Dream Defenders are an anti-Semitic organization which has leveled a libelous claim of genocide against Israel and actively promotes the anti-Semitic Boycott Divestment and Sanctions (BDS) movement against Israel.

If Senator Bullard is so unaware of with whom he is meeting with he is not qualified to represent Florida. I suspect he knew exactly whom he was meeting with. All it takes is a little investigation into Senator Bullard’s past activities to see what side he takes on these issues.

Senator Bullard has compared Israel to Apartheid South Africa. Bullard is quoted as saying, “We look back now in hindsight and say, ‘[Fighting] for the boycott and divestment movement against the South African government was the right thing to do. How that is somehow different as it pertains to Palestinian rights is really inexplicable.”
It is extremely troubling that a sitting Florida senator would compare Israel, one of America’s closest allies and a beacon of democracy and human rights in the Middle East, to the atrocities of Apartheid South Africa. Bullard should be aware of Israel’s stellar record when it comes to human rights. Israel is the only nation in history to bring Africans to another country, not for the purpose of slavery, but for the purpose of rescue, spending over $26 million on multiple operations to bring Ethiopians to Israel, saving them from famine and persecution.

During his visit, Bullard also met with a co-founder of the anti-Israel BDS movement Omar Barghouti, and images of them together also circulated on social media. BDS, the Boycott, Divestment and Sanctions movement, is a campaign aimed at singling out Israel for economic warfare.

Upon his return, Bullard participated in an event to “Recount a recent Witness trip to Palestine”, which took place at the pro-BDS United Church of Christ (UCC) in Coral Gables. Some of the themes of the evening’s discussion were oppression, inequality, occupation, imperialism, colonization in the 21st century, and apartheid. The event was organized by the anti-Israel group responsible for the UCC’s pro-BDS resolution, Friends of Sabeel, which sees the “two-state solution” as the first step towards a “one state solution”, a step in the ultimate destruction of Israel.

Floridians should know about Dwight Bullard’s associations with groups that seek the destruction of Israel and the Jewish People and call for Bullard to cut those ties, rescind his anti-Israel comments, and stand up against hate, in support of Israel. This Sunday, Floridians will stand against the BDS movement. I hope all Floridians who care about Israel will be there. 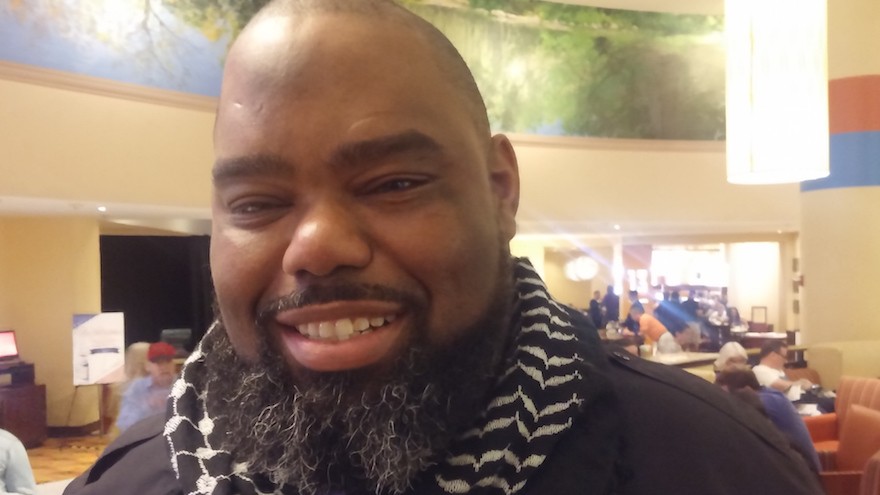 Florida State Senator Dwight Bullard wearing an Arab K’fiah at the Democratic Convention to demonstrate his Pro-BDS and anti-Israel stance. 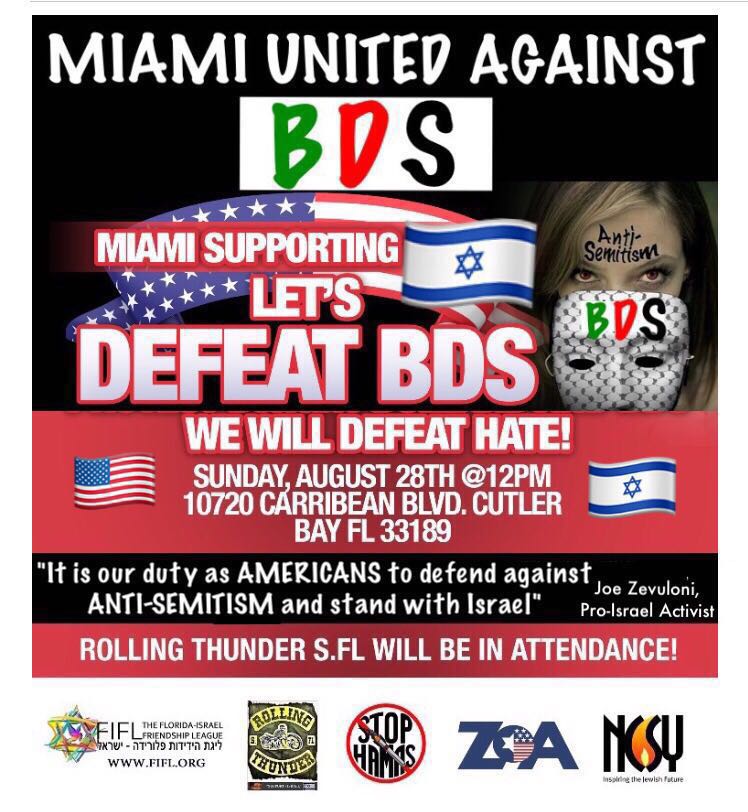 Flier for this Sunday’s Miami United Against BDS rally.
About the Author
Rabbi Uri Pilichowski is an educator. As a teacher, author and speaker, he teaches Torah and Politics, where he specifically emphasizes rational thought and conceptual analysis.
Comments