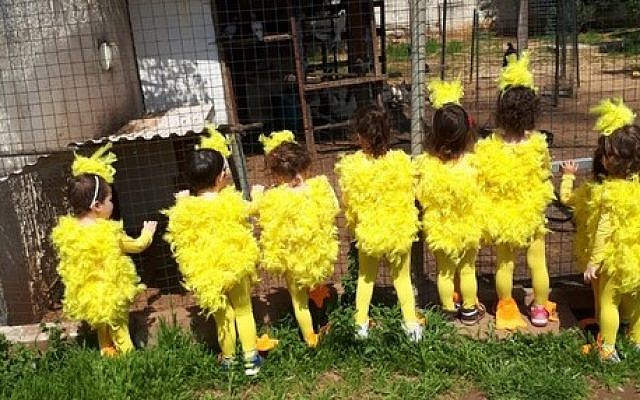 It’s hard to read the news these days – or is it just the news I read? – without encountering vitriolic debates about anti-Semitism, anti-Zionism, and the relationship between them.

The biblical book of Esther contains what is arguably the world’s oldest definition of anti-Semitism. It could have been written yesterday.

Esther 3:8 “There is a certain people scattered and separated among the peoples in all the provinces of your kingdom; their laws are different from those of every other people, and they do not keep the king’s laws, so that it is not appropriate for the king to tolerate them.”

With these words, Haman, the villain of Megillat Esther, constructs four pillars of anti-Semitism that remain standing to this day.

Resent the way that Jews live among people of other religions and ethnicities while maintaining their own distinctiveness;

claim that Jews do not keep the laws of the land;

and portray Jews as a disloyal fifth column that must be eliminated.

The context in which Haman makes this declaration reveals two additional anti-Semitic tropes.

Haman’s desire to eliminate the Jews of Shushan was provoked by the action of one single Jew; Mordecai refused to bow down to him. In anti-Semitic eyes, one Jew stands for all Jews.

But here’s the worst part. King Ahasuerus, who does not hate Jews, agrees without a moment’s hesitation to facilitate the world’s first anti-Semitic pogrom.

Esther 3:9 If it pleases the king, let a decree be issued for their destruction, and I will pay ten thousand talents of silver into the hands of those who have charge of the king’s business, so that they may put it into the king’s treasuries.” 10 So the king took his signet ring from his hand and gave it to Haman son of Hammedatha the Agagite, the enemy of the Jews. 11 The king said to Haman, “The money is given to you, and the people as well, to do with them as it seems good to you.”

Anti-Semites encounter little resistance when they try to weave their personal grudges into an institutional or national narrative.

Synagogue-going Jews, from the youngest to the oldest, hear Haman’s words and their aftermath every year of their lives. The Purim story’s lethal message – you will never, ever be totally secure in another land – is heavily disguised in masks, costumes, and general frivolity. But annual drunkenness, even to the point of oblivion, is not enough to erase a memory that’s seared into the collective Jewish consciousness.

I’m not just talking about the power of narrative, of course. Purim’s lethal message has been re-enforced with shocking regularity throughout Jewish history in the lives, and deaths, of real Jews. How many Jews alive today are more than two or three generations removed from brutal pogroms, mass murder or forced exile?

Anyone, especially anyone with political power, who utters words that sound even remotely like Haman’s anti-Semitic manifesto is opening a primal Jewish wound. The threat of pogrom, murder, death or deportation may not always be real, but the pain is.

A recurring theme in the book of Esther is visibility.

It’s not enough for King Ahasuerus to be extremely wealthy. He must display his great wealth in the form of a magnificent palace and lavish furnishings. 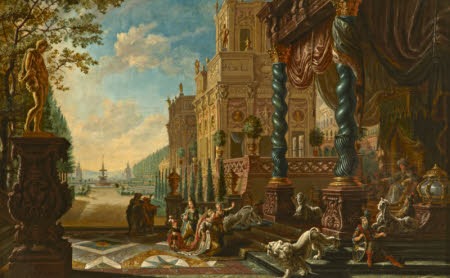 As I learned from a wonderful gallery talk by my friend Jonathan Price, the feasts of Persian kings were designed to visualize power as well as wealth. It wasn’t enough to be invited. Guests had to worry about where they were seated (the closer to the king, the better); what they were served (favored guests ate better food); and even the quality of their plates and cutlery. 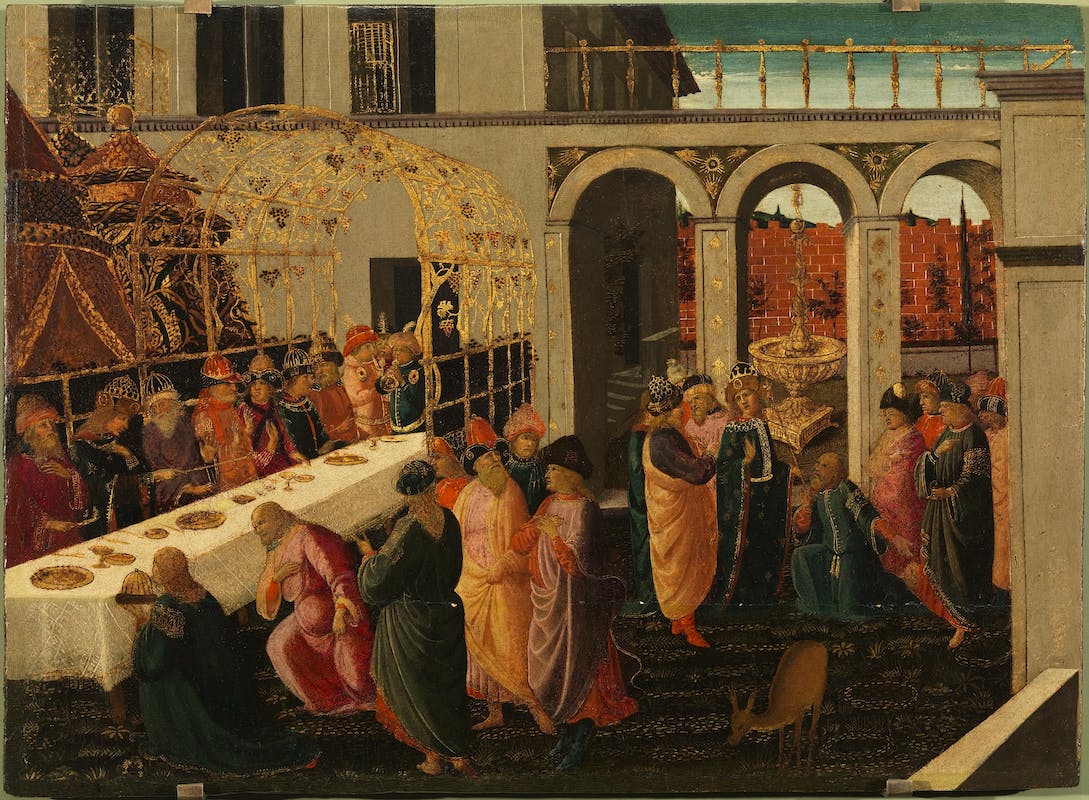 Vashti, King Ahasuerus’s wife, must have been very beautiful, but that wasn’t enough for him. He needed others to see her beauty. She refused to comply, and he lost her. 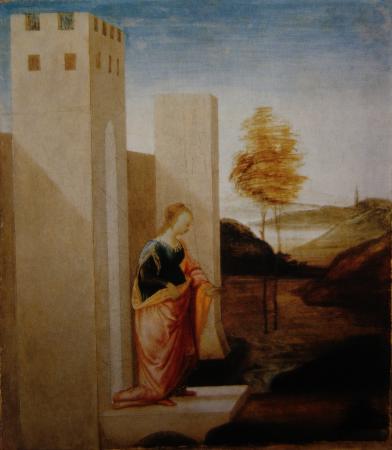 Asked how to reward someone who’s shown loyalty to the king, Haman recommends a public parade. He thinks he’ll be the one on display, but instead it’s Mordecai. 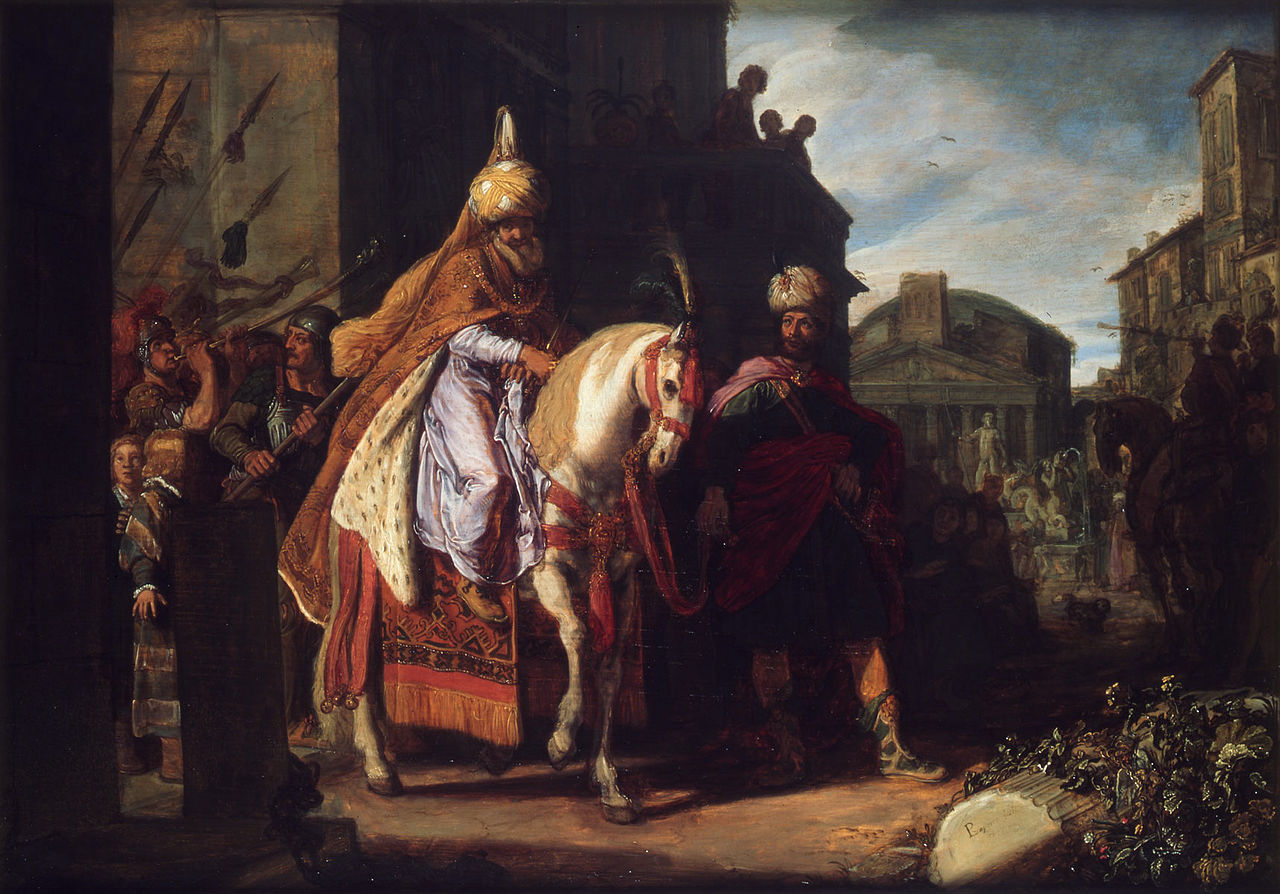 Power dressing has an important role to play. Mordecai attempts to go to the palace gates wearing sackcloth – a sign of mourning but also passive resistance. Esther sends him home to change his clothes. Once the decree is issued, the Jews of Shusan wear sackcloth.

It wasn’t just the content of the King’s many proclamations that mattered. They had to be heard in the language of each people and seen in the script of each state. Public posters and signs convey a visual sense of who controls a neighborhood or community, even if you can’t read a word. 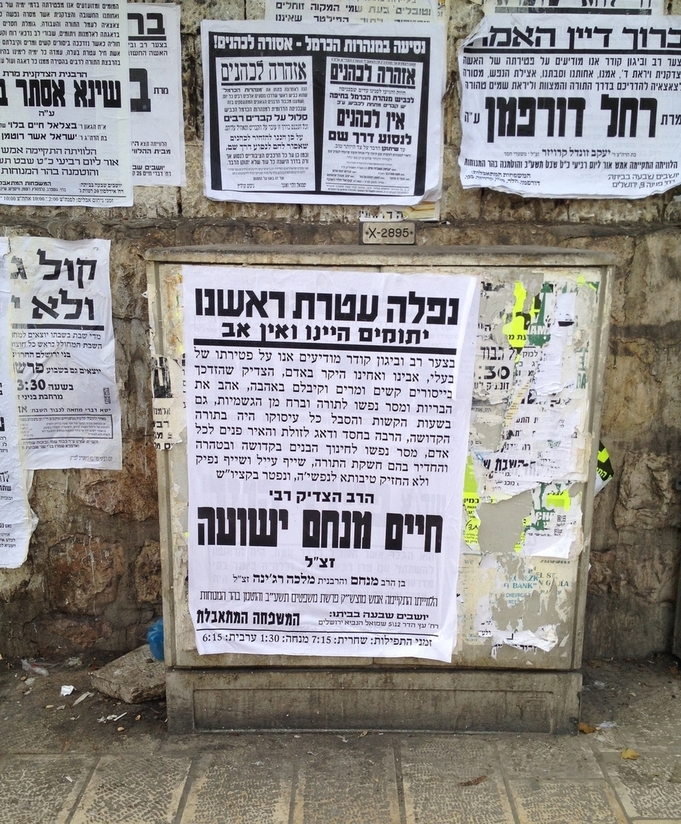 The public execution of Haman’s ten sons was a visual warning (used to this day in our part of the world). 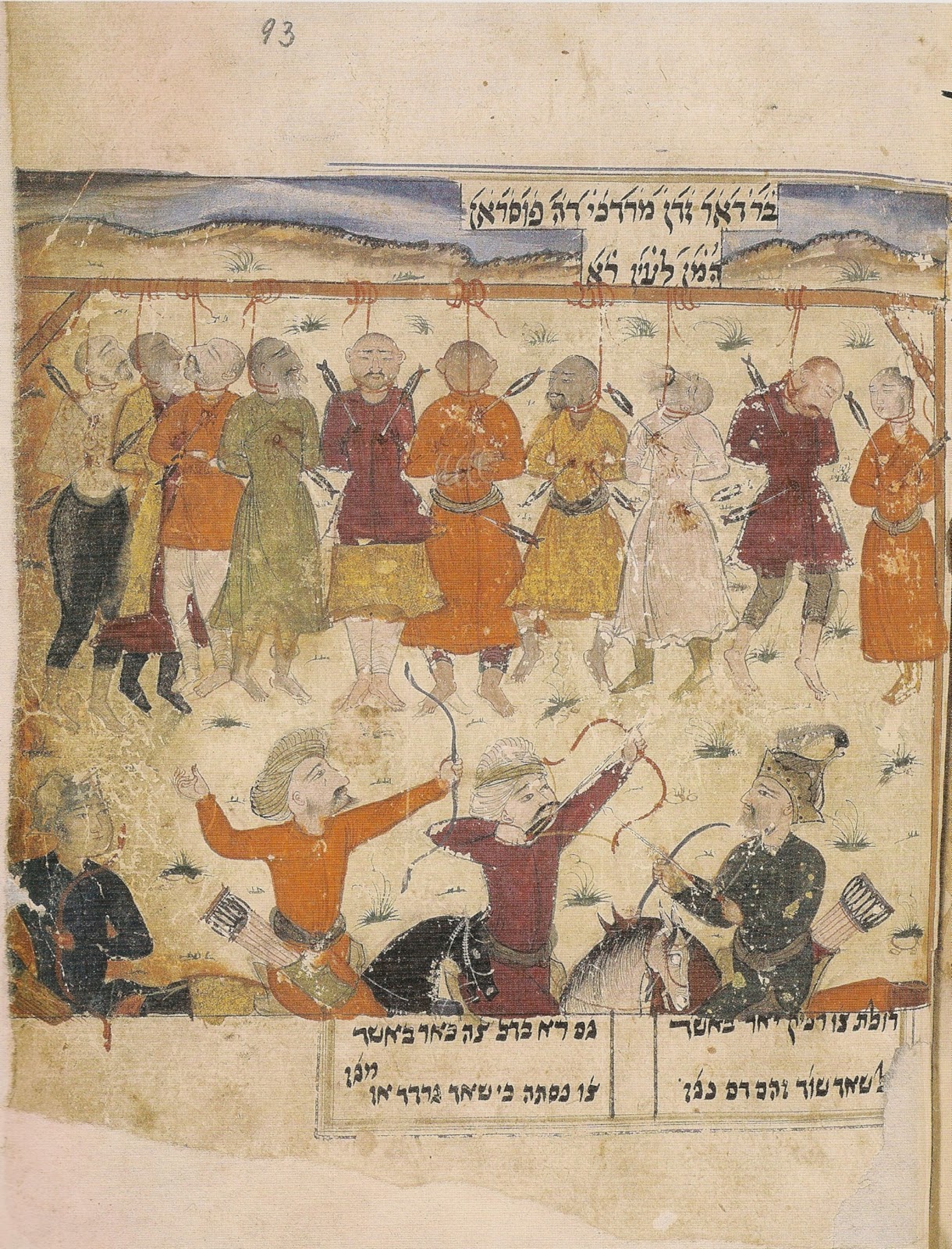 Appearances matter very much in the Purim story. They drive home a crucial message: in a diaspora setting like Shushan, someone’s always looking at you, and it’s not good news.

Last week I was in Venice, a city it’s hard to take your eyes off. 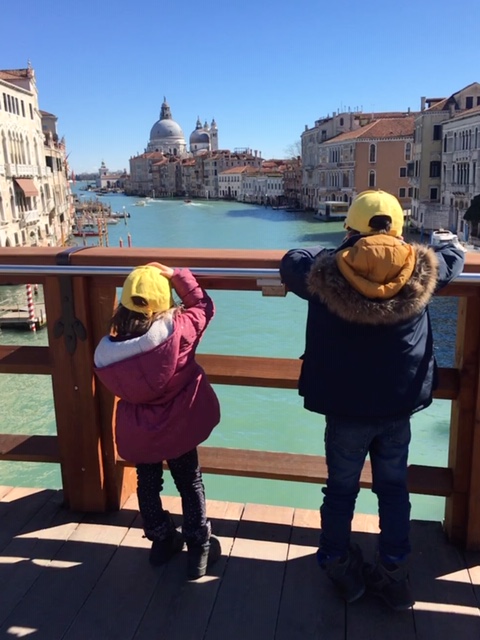 Looking at Venice I (my photo) 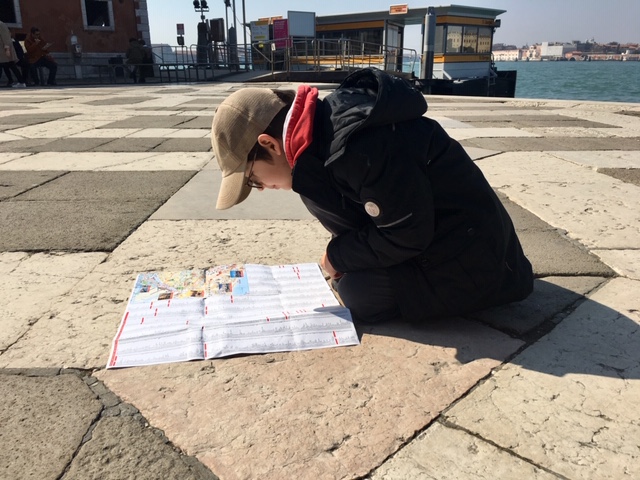 Looking at Venice II (my photo)

Venice was famously the home of the first Jewish ghetto. When the Venice Ghetto was in operation, Jews were free to come and go for much of the time. But at night there was a curfew. Guards ensured that Jews didn’t leave the Ghetto and that no-one else entered. Non-Jews kept an eye on Jews, with all that entails. 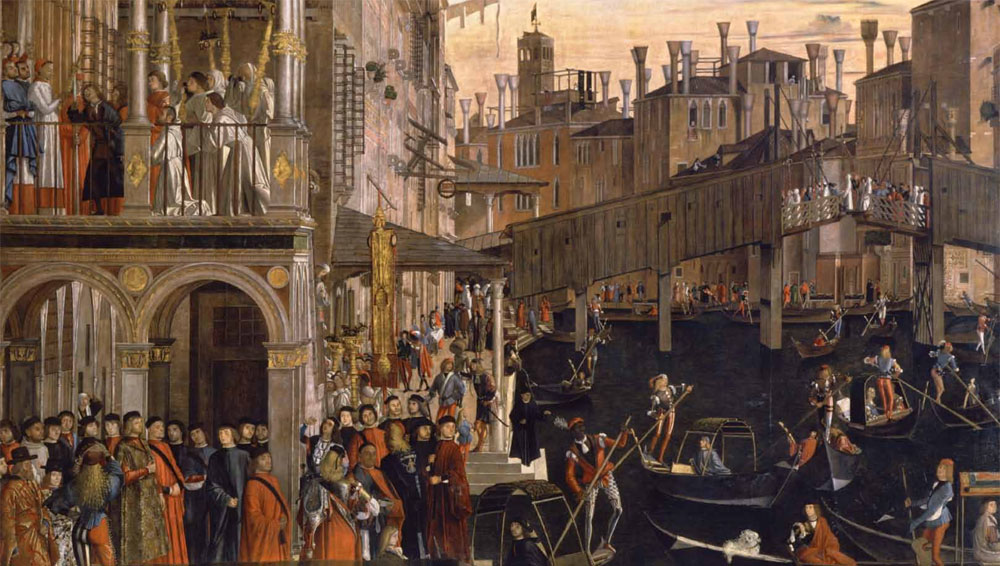 Vittore Carpaccio, The Healing of the Madman, 1494 [see Jews in the bottom left corner]
Outside the Ghetto, all but a few Jews were required to wear distinctive clothing, such as colored hats, so that they would be instantly recognizable as Jews.

Watercolor illustration of an Ebreo (Jew) from an 18th-century book by Giovanni Grevembroch illustrating various inhabitants of Venice and their dress—the basket of kitchenware alludes to his trade in second-hand goods. ©Venice, Biblioteca del Museo Correr, MS Gradenigo-Dolfin.

None of this was unique to Venice, of course. In other cities, at other times, Jews have been subject to stringent rules regarding visibility (often involving hats). 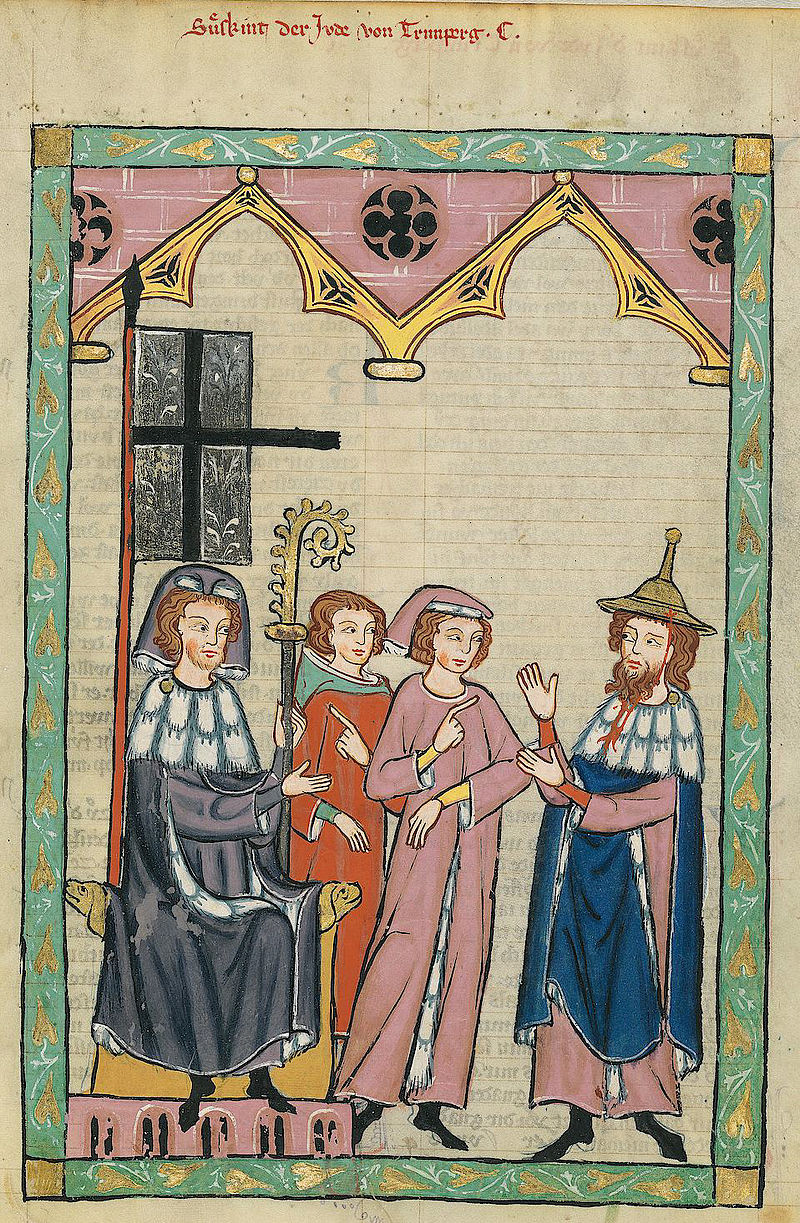 It’s been taken as given that non-Jews have the right to scrutinize Jews. Indeed, the special scrutiny of Jews seems so natural that alarm bells don’t go off when the accompanying urge to control and eliminate kicks in. 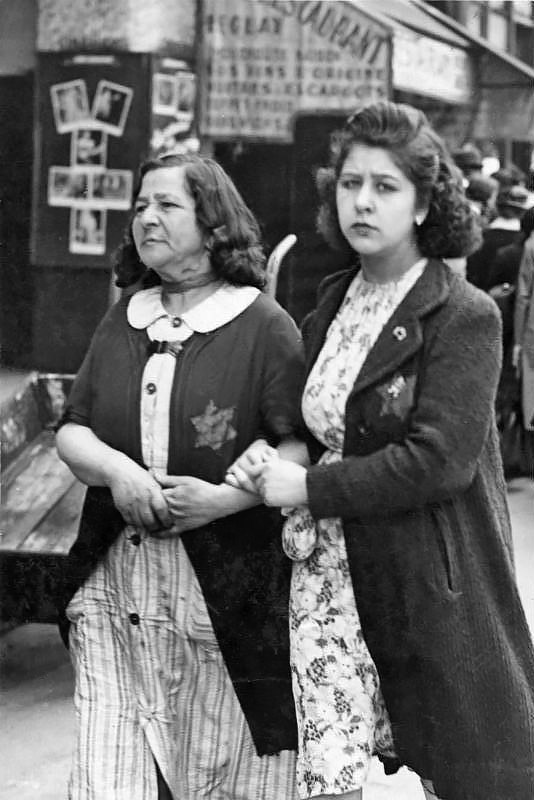 I want to make two points about visibility. The first concerns modern-day Israel by way of ancient Egypt.

There are two defining moments in the Exodus narrative in which visibility comes to the fore.

Confronted by the sight of an Egyptian man beating a Hebrew slave, Moses looked around to see if anyone was watching him before taking justice into his own hands.

11 One day, after Moses had grown up, he went out to his people and saw their forced labor. He saw an Egyptian beating a Hebrew, one of his people. 12 He looked this way and that and seeing no one he killed the Egyptian and hid him in the sand.

At a surface level, Moses was simply making sure that there were no witnesses to his crime. At a deeper level, this was the moment at which Moses chose between his Egyptian and Israelite identities. It’s no coincidence that Moses marked his departure from the diaspora with an exaggerated looking around to see who was looking at him.

The Hebrew slaves who wanted to leave Egypt were required to put blood on their doorposts. 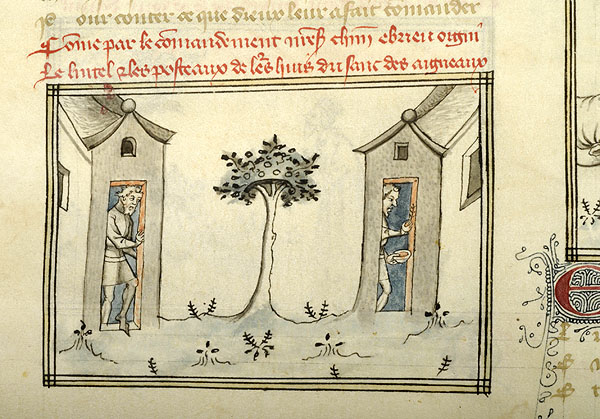 Two Israelites marking the doorposts and lintels of their homes with the blood of the sacrificial lamb. History Bible, Paris, c. 1390.

At one level, this was so that God could see which houses to pass over when he killed the first-born sons of Egypt. At a deeper level, it enabled the Israelites to make visible, for their own benefit, their identities. For the first time in 400 years, what mattered was not how others saw them, but how they saw themselves.

Back to the present. Two thousand years of diaspora living blurred this crucial distinction between Jews as people who are seen and Jews as a people who see themselves. Even now that we have a land of our own, we imagine that everyone’s looking us. And unfortunately, they often are. Old habits die hard.

Many non-Jews assume, no doubt unconsciously, that they have the right to scrutinize Jews living in their own land, just as they had the right to scrutinize Jewish ghetto-dwellers. Many non-Jews behave as if Jewish life in the national homeland is still contingent and conditional on external approval, as it was in the ghetto. And many non-Jews have an urge to control Jews in their national homeland – through BDS, for example – and even eliminate them. Ironically, they want Jews to go home … ‘home’ to the very countries in which they depended on the good will of scrutinizing non-Jews. In this respect, I think, anti-Zionism is inseparable from antisemitism.

Jews are the Other par excellence, but there are other Others. On the flight from Jerusalem to Venice last week, I finished reading Home Fire, a novel about a British family of Pakistani origin whose son joins ISIS when his twin sister goes to university. 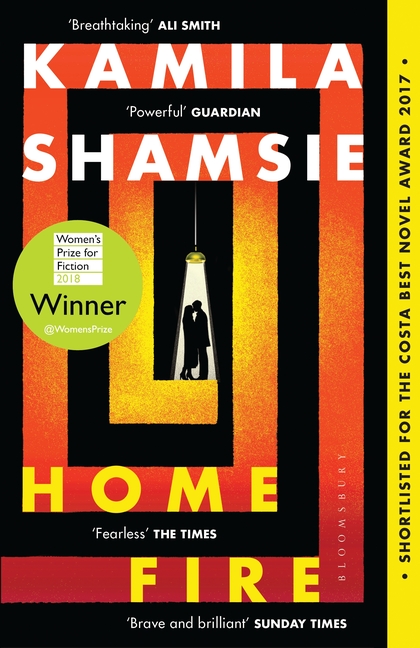 In Home Fire, like the book of Esther, visibility is a recurring theme, explored for example via airport security checks and hijabs. Towards the end, the ISIS recruit’s twin sister stages a dramatic visual protest — modeled on Antigone — that captures the world’s attention.

The shift from the perceived right to scrutinize to the urge to control and eliminate plays out in Home Fire in the British Home Office’s refusal to allow the boy’s body back into the country for burial (he was murdered by an ISIS official in Turkey while trying to reach the British Consulate). This was possible because he was a dual national and could be buried in Pakistan.

In real life, on the world stage, the shift from the perceived right to scrutinize to the urge to control and eliminate played out last week in the tragic massacre of 50 Muslims praying peacefully in a mosque in one of the world’s most peaceful countries.

As challenging as it is in the present geo-political context, Jews should be at the forefront of the effort to teach the world that excessive scrutiny of a perceived evil or imperfect Other is never a solution and may well lead to a much bigger problem.

Since I haven’t written much to feel happy about …  enjoy this! 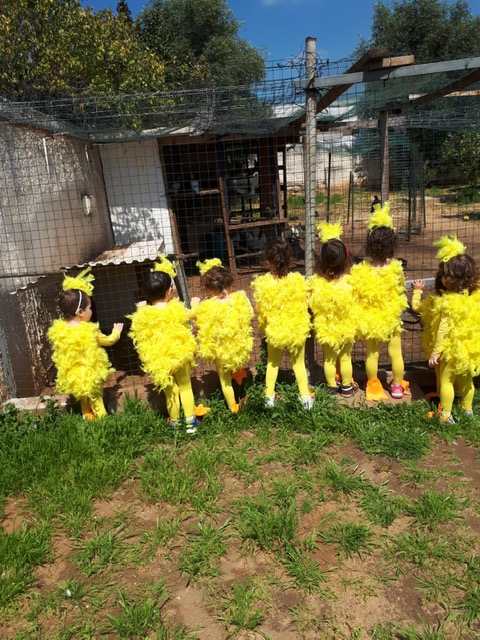 A kindergarten visit to a chicken farm, Hod HaSharon, Purim 2019, Photo credit: Lihi Boaron
About the Author
Before I moved to Israel in 2011, I was a Fellow of Newnham College, Cambridge (1997-2006), and a Reader in Hebrew Bible and Jewish Studies at King's College London (2007-2011). In Israel, I've taught Bible at Hebrew University's International School and, currently, in the Department of Biblical Studies at Tel Aviv University, where I am a Teaching Fellow and chair the Academic Steering Committee of the Orit Guardians MA program for Ethiopian Jews. I give a weekly parsha shiur at Beit Moses home for the elderly in Jerusalem. I serve on the Boards of Jerusalem Culture Unlimited (JCU) and Hassadna Jerusalem Music Conservatory. I'm the very proud mother of Jacob and Jonah, and I live in Jerusalem with my husband Chaim Milikowsky. My last book was 'From Forbidden Fruit to Milk and Honey: A Commentary on Food in the Torah'; proceeds go to Leket, Israel's national food bank. The working title of my next book, co-authored with Micha Price, is 'A Biblical Guide to the Climate Crisis'.
Related Topics
Related Posts
Diana Lipton
Comments