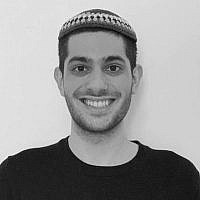 The Blogs
Shlomo Yitzchak
Apply for a Blog
Please note that the posts on The Blogs are contributed by third parties. The opinions, facts and any media content in them are presented solely by the authors, and neither The Times of Israel nor its partners assume any responsibility for them. Please contact us in case of abuse. In case of abuse,
Report this post.

Having spent 6 months living in the heart of the Old City of Jerusalem, I can confidently say that there are some things that you can only experience in Israel. Preparing for holidays is on my short list as one of them. As Jerusalem ushered in the month of Adar, routine shops began transforming into costume parlors and trains became decorated with glitter and streamers. There has even been a spike in grocery workers ridiculing my American accent because “it’s Purim, and I need to have a little fun!” Here, Purim is everywhere. It even feels like Purim is the most important day of the year. And the truth is, it may be.

The Chasidim, naimly the Slonimer Rebbe Rav Sholom Noach Berezovsky, point out that Yom Kippur is referred to in the Torah as Yom Hakipurim hinting at the fact that Yom Kippur is really Yom “keh” Purim, a day that is “keh” or like the day of Purim, implying that Yom Kippur is really a miniature Purim. The Ramchal in his book Mesilat Yesharim, or Path of the Just, provides an insight into the notion of Purim being holier than Yom Kippur, by comparing Tahara to Kedusha. The Ramchal says that Tahara, commonly translated as purity, is a much lower level than Kedusha, holiness, because Tahara is purely a function of avoiding Tumah, impurity. In other words, one becomes pure by avoiding, not doing.

Kedusha, on the other hand, is the highest level that one can obtain. The Ramchal says that Kedusha is achieved when we venture into the things of this world, mainly things of impurity, and we elevate them to the realm of holiness. Kedusha is when we repair a broken synagogue, when we make a bracha over our food and when we use or words for inspiration rather than degradation. Kedusha is when we take the mundane and use it as a vehicle to heighten our G-d consciousness, a consciousness that reminds us that we are all made in the image of G-d, all deserving of love, kindness, respect and assistance.

The Slonimer Rebbe in the name of the Ramchal points out that when describing Shabbat, a day dominated by eating and drinking, the Torah commands us with the words Mikadshechem and Kadosh, both derivatives of the word Kedusha. The Torah describes the day of Shabbat as a day of Kedusah, because on Shabbat we engage in the physical entities of this world, food and drink, which through blessing, we elevate into the realm of Kedusha. When describing the day of Yom Kippur, however, the Torah uses the word Titaharu, a derivative of the word Tahara, effectively describing Yom Kippur as a day of Tahara. This makes sense considering the fact that on Yom Kippur we separate ourselves from this world. We are devoid of food and drink and we wear white, in effort to mimic the heavenly angels. The Slonimer Rebbe asserts that Shabbat is actually a holier day than Yom Kippur, drawing on the Ramchal’s idea of Kedusha superseding Tahara. If Shabbat is a day of Kedusha and Yom Kippur is a day of Tahara, and Kedusha supersedes Tahara, surely Shabbat is more holy.

From this we can understand why Purim is the ultimate day of Kedusha and therefore the holiest day of the year. Unlike on Yom Kippur, on Purim we are fully submerged in that of this world. We have a mitzvah to interact with others through matonot l’evyonim, mishloach manot, and we have a mitzvah, admittedly on a textural level with many conflicting opinions, to become intoxicated to the point that we don’t know the difference between cursed Haman and blessed Mordechai. Purim is all about thrusting ourselves into matters of this world with the intention to elevate them to the realm of holiness. Purim is about, venahafochu, transforming mundane acts into acts of holiness. “And the Jews ruled over those who hated them”– Purim is about ruling over that which normally rules over you: your Yetzer hara (evil energy). It is about channeling the intense energy of your physical urges and venahafochu, flipping it around, using it for good. The opportunity on Purim to achieve heights of Kedusha is why Yom Kippur, a day of Tahara is known as “k’Purim”, i.e. like Purim.

In last week’s Parsha, Parshat Tetzaveh, the Kohanim are given instructions on what to wear and how to perform the Temple service. The Torah goes through the various holy garments worn by all the Kohanim: the ketonet, michnasayim, mitznefet and avnet. Additionally, the Kohan Gadol, the high priest, wore the efod, choshen, me’il and tzitz. When describing the Tzizt, the golden showplate, the verse says “And you shall make a showplate of pure gold, and you shall engrave upon it like the engraving of a seal: Holy to the Lord.“

It is not surprising that the catchphrase of the Kohen Gadol is Kadosh La’Hashem, or Holy to the Lord, considering that Kedusha lies at the very essence of the Kohen’s temple service. The initiation process for becoming a Kohen requires Aaron and his sons to take a bull and separate it completely, to take the blood and place it on the Altar, to take the skins and dispose of them outside as a sin offering and to take the various fats and innards and separate them before offering them up to the Lord. On a deeper level, the job of the Kohen was to constantly be engaged in the physical, the Korbanot (temple sacerfices), but to separate it. The Kohanim were required to sift through the aspects of the Korban, i.e. the physical world, and pick out the good from the bad, ultimately elevating each part of the animal to the realm of  Kedusha. The Kohanim, the holiest members of the Jewish people, were not perched up high, mediating atop some mountain; they were knee deep in physical. They were the only people who were able to bring Korbanot because they had the capacity to engage the physical and rather than getting sucked down by it, they were able to elevate it to the realm of Kedusha.

The Kohanim and the holiday of Purim teach us a tremendous lesson about Kedusha. They teach us that the highest level a Jew can aspire for is the level of being present and active in this world. For a Jew to be considered holy we are not expected to abstain from life. We are not expected to defect to an isolated mountain and praise G-d in solitary confinement. We are supposed to be like the Kohen Gadol, constantly sifting through the parts of this world, extracting the good and elevating the parts of evil. We are meant to live a life of transcendence.

Purim is the ultimate day of holiness because it is a day, when done right, where we can be fully invested in the physical world, yet at the same time, remain above it. On Purim we don’t run away, rather, we run to. We run to realizing a more perfect version of ourselves by transforming the energies that usually rule over us into energies used for good. We run towards realizing a more perfect world, a world where we have the ability to engage in impurity and bring it up, instead of having it bring us down. On Purim we deliver gifts and money to others, and we rededicate ourselves to wiping out evil. We combat hate with love, fractions with togetherness and impurity with transcendence. Purim is a time to be like the Kohen. It is a time to view ourselves as vessels for channeling Kedusha. This Purim may we all achieve true Kedusha, a Kedusha that transforms this this world into a better place, a Kedusha that elevates, a Kedusha that uplifts.

About the Author
Simon Kofman, or better known as Shlomo Yitzchak, is a BA/MA student at NYU pursuing a joint BA/MA in Politics, Rights and Development (BA) and International Relations (MA). Shlomo was awarded the NYU Innovation Scholarship and is passionate about creating systems and structures that bring healing to the world.
Related Topics
Related Posts
Comments