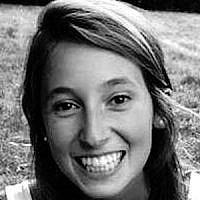 The Blogs
Adina Karpuj Bortz
Apply for a Blog
Advertisement
Please note that the posts on The Blogs are contributed by third parties. The opinions, facts and any media content in them are presented solely by the authors, and neither The Times of Israel nor its partners assume any responsibility for them. Please contact us in case of abuse. In case of abuse,
Report this post. 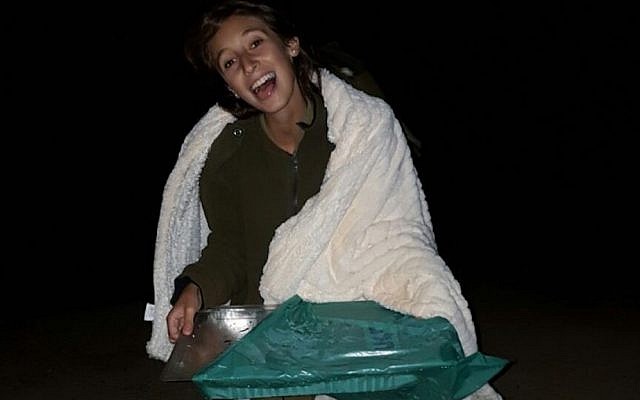 3 AM: A tin pan of soggy tuna and me in the middle of nowhere (courtesy)

It’s three in the morning and the cold desert wind is slapping hair across my face in the middle of nowhere. The smell of soggy tuna permeates the air as I lug a tin pan from an army jeep to the makeshift table we’ve put together. My friend’s platoon is just three hours from the grand culmination of their masa kumta — the trek that merits trainees their unit’s beret at the completion of basic training — and we’re setting up the welcoming platform from where they’ll receive not only the long-awaited cap they’ve worked hard to attain, but also the smelly breakfast whose preparation is replacing my sleep. We — the other military social workers, commanders, and officers who join me — laugh the night away singing old tunes until the sky begins to lighten and a starry night gives way to dawn. This is how I spend the last few hours of my last week in the army before the Jewish holiday season officially commences.

De’agah: Worry — the essential core of what lives at the center of every Jewish mother you’ve ever met. Iraqi, Polish, Yemenite, or hailing from the former USSR, Jewish mother’s harbor their own breed of this emotion, and — along with guilt — bestow it on their loved ones, too. So is it any wonder that this sense of concern percolates through the disciplinary foundation from which the Israeli army springs? Is it any wonder that the men and women holding M16s on the front lines on erev chag are being thought about not just by their parents and childhood friends, but also by the institution to which they’ve sworn their lives?

Military de’agah ranges far beyond stress about your cold, or why you haven’t called in three days, even though the double checks on WhatsApp are blue. In Israel, to worry for is to take care of — to make someone else’s problems your own in order to get the job done; to go far beyond the formalities of rank and organization until you’ve solved your — err, your soldiers’ — problems.

As a military social worker, I’ve spent the last two months telling soldiers that the “critical bank statements” that they were supposed to hand in two weeks ago, or the signatures of their parents’ physicians and psychiatrists that were once “urgent” are no longer so crucial. Sure, my mornings have gotten earlier and my bedtime has become irrelevant, but my work has also become, in some sense, easier and all the more meaningful. As the the holidays approach, the amount of financial aid I’m able to provide only grows.

We call it Nohal Chag — a time before all major holidays during which the usual documents and statements that are required for medical and financial aid-eligibility are suddenly a little less crucial, and assistance is a little bit more available.

Where are you spending the holiday?

How many people are going to be home?

Are you sure your mother isn’t just saying there will be enough food so that you don’t worry?

What about some extra help at the grocery store?

Would it be okay for us to deliver a food package?

There’s no embarrassment in seeking out help.

These and many other questions of the sort shape the majority of my meetings with soldiers as my office checks with each and every one that there is no chance a family will be left with an empty table as the shofar is sounded throughout the country. These are the concerns that occupy my time as the nation prepares for the High Holidays.

As I head to bed after a long night of no sleep, my phone dings with the following message:

“Adina, we’ve just received the food package that came from the army. I can’t tell you how much this helps. Preparing for the holidays has been keeping me up at night; I had no clue how I would manage to feed everyone. Thank you, thank you, thank you, and Shanah Tovah!”

While I appreciate this mother’s gratitude, I am fully aware that it is not my work alone that has fed this family; rather, I am one bead in a long chain of de’agah.

I am proud to belong to an institution that cares for the people who serve it. I am proud that in this country, no solider enlists into the army without his or her family’s economic and medical situations being evaluated. I am proud to be part of a people that understands that each and every soldier comes from a world of their own whose mothers, fathers, siblings, and sometimes even spouses are worrying for them at home and might very well be in need. I am proud to serve in a military who concerns itself with the human being inside the uniform, and not just the soldier on the battlefield.

Yes, my phone bill will run a little higher this month with the number of phone calls I’ve made to other people’s parents, and yes, some of my friends in America haven’t heard my voice in a while. But as I myself bring in 5777 at a friend’s home, I am grateful for the privilege of having helped so many families sleep a little bit easier this holiday.

This is true de’agah. This is what it means to celebrate our new year. 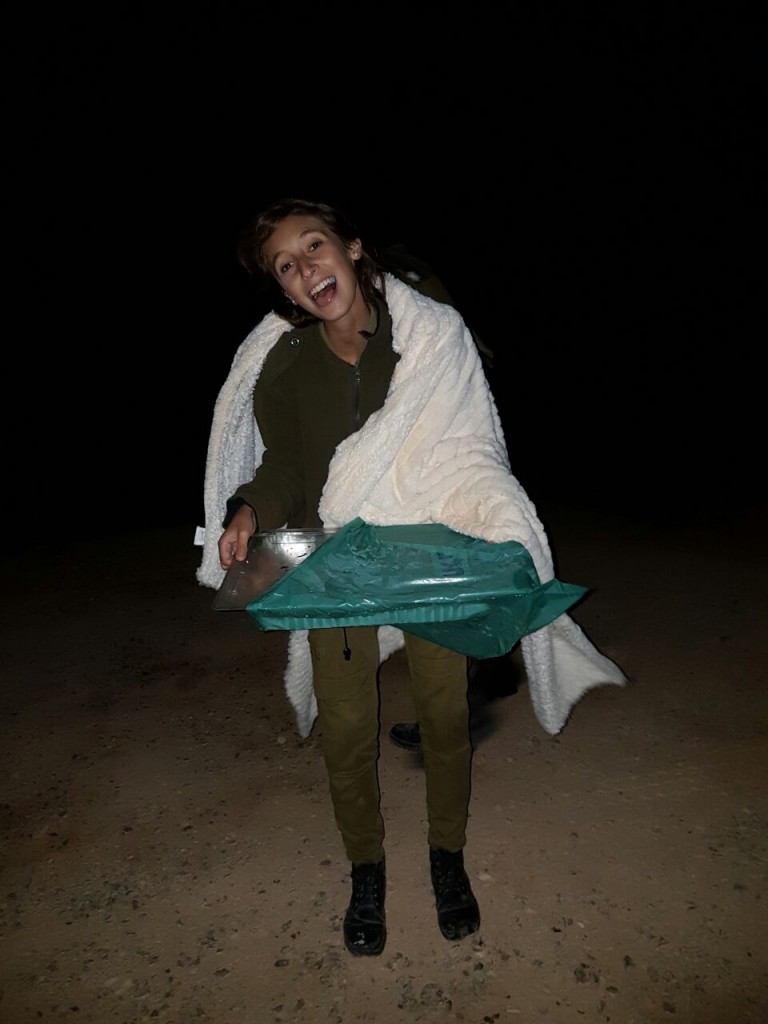 03:00: A tin pan of soggy tuna and me in the middle of nowhere
About the Author
Adina Karpuj Bortz was born in Chile and grew up in Atlanta. She attended The Solomon Schechter Epstein School and The Weber School where her interests in languages, writing, photography, and the Middle East blossomed. She is a Camp Ramah Darom and Szarvas alumna. Adina spent last year living in Jerusalem and traveling the world through Kivunim, and made Aliyah in August 2015. She now serves in the IDF.
Related Topics
Related Posts
Comments