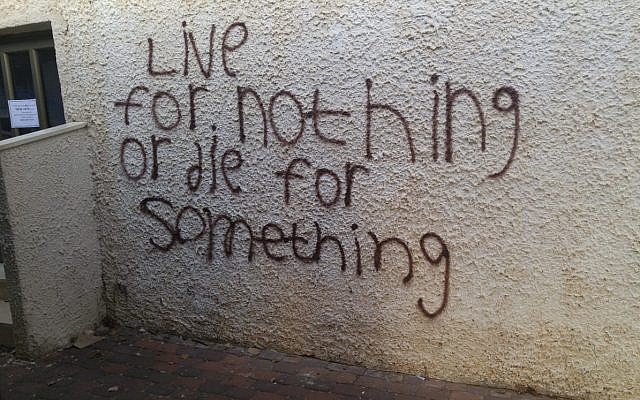 President Trump’s new special envoy warns that anti-Semitism in the US is at its highest level since the Holocaust.

He is wrong. He is scaring us unnecessarily, harmfully.

Elan Carr is new at his job as envoy to fight anti-Semitism. It’s understandable, maybe, that he would overstate his case at the beginning of his run, but it’s inexcusable.

It fits into the mentality – mistaken or misleading, take your pick – of seeing the world as a dangerous, threatening place for Jews, when the reality, especially in the United States, is the opposite.

Today, Jews are the most successful minority in the US. We’re so successful that some are lumping us together with whites, as if we have “white privilege.” How quickly they forget, or repress, the recent past, playing hand in glove with politicians who parlay the fear into votes.

We need to act from our actual position of strength, not fear. Someone should write a book about this. Oh, wait, I just did. It’s called, “Why Are We Still Afraid? A reporter’s 46-year story of Israel growing strong.” And just as Jews have become steadily more secure in Israel, so have they in the US.

Not so long ago in the US, there were quotas for Jews entering universities. Some professions were closed to Jews. Country clubs? Forget it. Jewish kids were getting beat up on the streets almost every day, in almost every school, and called names that I won’t repeat here.

There are still attacks on Jews, lately in Brooklyn, but life for Jews in the United States has improved so much in recent decades that you have to reach back into your memory to dredge up examples from the list above. Now the incidents are so rare that they make news. Back then, they were so routine that they were, well, routine.

The situation in the US today is exponentially better than it was in the 1950s, ‘60s, even ‘70s. Back then, anti-Semitism was an acceptable part of the culture. Today, not only is it officially unacceptable – most overt acts of anti-Semitism are illegal!

The attack against the synagogue in Pittsburgh last year, when a white supremacist walked in and shot 11 people dead, unnerved us all. Some bridled at the suggestion from President Trump that you post armed guards at synagogues.

But that’s 21st century America. There are metal detectors in front of schools. Hardly a day goes by without some kind of mass shooting. In 2017, 39,773 people were killed by gunfire in the US. Precautions are essential everywhere, and we are not exempt. It’s not that you’re Jews—it’s that you’re in America.

Until Pittsburgh, most of the anti-Semitic incidents in the US were, while regrettable, not that harmful. It even happens here. On a recent Shabbat a kid spray-painted a slogan (above) on my synagogue in Rehovot in central Israel. Two days later we just repainted the wall. No one was hurt. I’m not saying it’s OK—it most decidedly is not—but we need to respond with wisdom, not fear.

There appears to be an upsurge in painting swastikas on buildings, sidewalks, wherever. For those of us with a direct connection to the Holocaust, that is horrifying. But let’s face it – the number of people with direct connections to the Holocaust is diminishing every day, and studies show that significant numbers of younger people don’t know what happened then. I’d suggest that most of the kids painting swastikas these days don’t know what they represent.

All this leads to spasms of hand-wringing, cursing, and groaning on antisocial media. That’s the opposite of the proper response by confident, intelligent, and resourceful Jews.

Instead, we must not accept a situation where young Americans do not know about the Holocaust. It must not become just another one of those things that “happened a long time ago.” That means we must invest our beings, our spirits, and our money in education. Yad Vashem has some good programs. We should expand them a thousand times.

Likewise, we must blanket the districts of anti-Semitic representatives with education programs about Israel—the facts will speak for themselves.

That’s how Jews must react when they are the strongest, most successful minority in the history of the United States. Not by hiding under their beds.

Correspondent Mark Lavie has been covering Israel and the Mideast since 1972. His second book, “Why Are We Still Afraid?” has just been published. www.marklavieauthor.com

About the Author
MARK LAVIE has been covering the Middle East as a news correspondent, analyst and author since he moved to Israel in 1972. Most of his work has been in radio news, starting as an anchor and reporter for Israel Radio's English-language news service and continuing as Middle East correspondent for radio networks including NPR, NBC, Mutual, and CBC in Canada, then 15 years with The Associated Press, both radio and print. He won the New York Overseas Press Club's Lowell Thomas Award for “Best radio interpretation of foreign affairs” in 1994. His second book, “Why Are We Still Afraid?” is a personal look at 46 years of Israeli history, and it comes to a clear and surprising conclusion.
Related Topics
Related Posts
Mark Lavie
Comments