A lot was learned over the past week. Following are my choice lessons:

1. The Pope is ultimately a man of prayer. This might seem obvious, yet it is far from obvious. As head of state and as visitor to a politically charged part of the world, a lot of politics forced itself into what was essentially a pilgrimage of prayer. It is therefore not surprising that the highlights of the trip were the moments of prayer. That is where we got the best of Francis. Without a doubt, the prayer at the Holy Sepulchre, the goal and purpose of this visit, was the crowning moment of the visit and its most inspiring moment (a fact that, on the face of it, will only speak to Christians, but one that must nevertheless be stated). The Pope got out of this trip what he (and Patriarch Bartholomew) came for. 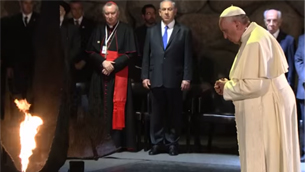 On the Israeli side, the most moving moment was at Yad Vashem, where Francis offered a homily/prayer that captivated the imagination and spoke to the hearts of all humans, as humans. And the only apparent objective takeaway from this visit is the moment of prayer we shall be witnessing in the Vatican in about 10 days, in the presence of Presidents Abbas and Peres, a moment that Francis would have liked to take place during his visit, but that due to political realities could not be accomodated locally. This man of prayer has succeeded in bringing Israeli President Shimon Peres to pray.

2. The Pope is a shepherd, and a shepherd does not do well without sheep. Pope Francis is famous for his ability to interact, to be spontaneous, to relate to his flock. The numerous shots of him reaching out to the crowds at St. Peter’s have become his trademark. We saw none of that. The reason is that on the Israeli side we had a shepherd without a flock. One of the local Catholic Bishops complained to me how sad it is that the local faithful had no chance to encounter the Pope, who was taken up with meetings with leaders – political and religious. The same is true for the Israeli public. There was no possibility for encounter. The Pope’s choice of avoiding an armored car meant access to him was barred as he drove through empty streets. A shepherd without sheep is a sad shepherd and there was something withdrawn and removed in Francis, throughout his visit in Israel.

3. The Pope is human and has bodily needs. I have heard time and again from the faithful and from observers how tired Francis looked. Who wouldn’t, at his age, having to endure a gruelling schedule, that begins with his own waking up at 4 am for prayer? And it showed, and ultimately impacted the quality of his interactions. And let us not forget how taxing it must be to relate to the world through translation. Sadly, we did not get the best of him. 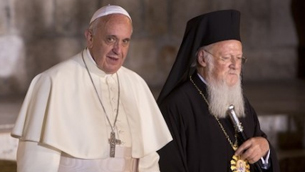 4. A good visit requires time. There are many consequences to a rushed visit, beyond tiring out the Pope himself. Speculations loom large as to why the visit was so short. Michael Melchior has opined that it is due to his wishing to avoid getting sucked into local politics. I see it as a consequence of an attempt to privilege the encounter with Patriarch Bartholomew over all else, leading to a short visit, in which Bartholomew gets more face time with the Pope than any other figure. Whatever the reason, the price was heavy, too heavy: no mass in Israel, no visit to Gallillee, no boost to tourism, no interreligious dialogue, and more. Good relationships require time to develop. So do really succesful papal visits. If the trip was succesful for what it did accomplish, in line with its original design, it was much less succesful in terms of all the missed opportunities, stemming from a strategic decision to keep it all too brief.

5. Perhaps the media will never get the Pope (or religion) right. Reading various media reports and op-ed pieces was frustrating, even painful. When one prominent columnist complains that the masterful speech at Yad Vashem should have been a condemnation of Christianity’s direct or indirect involvement in the holocaust, one is not only confronting a tone-deaf media; one is confronting an ignorance that refuses to be healed. So much has been done in the past in this respect, especially during previous papal visits, that this demand is out of place. And yet it represents the common voice of ignorance. Or take the invitation to pray at the Vatican that was readily translated into a new peace initiative. Somehow, anything poetic, religious or spiritual was missed. The story was flattened to its political and pubic expressions.

6. Touching hearts, not stones. I am saddened by the attempt to encapsulate the papal visit by images of the Pope touching three stones – the wall at Bethlehem, the Western wall and the stone at the entrance to the Church of the Holy Sepulchre. This Pope has the ability to touch hearts, not to touch stones. And yet, the sad truth is that few hearts were touched during this visit. There was much admiration and star-gazing, but how the visit was structured left little room for being touched. This is true of images as well as of speeches. It seems the Pope didn’t even try to touch us. Focusing on the purpose of his visit (reliving the encounter with the Orthodox Patriarch) and fulfilling his official duties in a series of public meetings seem to be as much as he could manage. Consequently, any hopes for advances in Jewish–Christian relations, as suggested by his Rabbi friend Skorka, did not materialize. I, for one, had expected a visit that could be in some way transformative. In this sense, I was disappointed.

7. It takes two to tango. It is impossible to deliver a meaningful message when one is being co-opted by others, as the Pope constantly was. Welcome speeches by others defined for him what the purpose of his visit was. Politicians interpreted his gestures. The media forced meaning on simple actions. Even trivial exchanges concerning the language that Jesus spoke became burdened by interpretive layers that made it next to impossible to have a true encounter. Apparently, most of us are unable to hear a spiritual message without forcing our agenda on it. If the Pope did not touch or transform, it was as much a consequence of what we chose to hear as it was a function of what he chose to say. 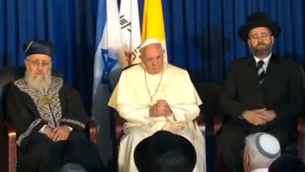 8. Polemics are not over, the game of symbols continues. There was a fascinating lesson in how Jews construct their identity and how this is done in an attempt to single themselves out over and against Christians. Chief Rabbi Yosef wore a special chest decoration in the form of the ten commandments to the encounter with the Pope. It was the “Jewish answer” to the cross. But what a silly idea that is. Why do Jews need to have an answer to the cross? Let them remain true to themselves and to their traditional dress code. No one would think Rabbi Yosef was Christian if he failed to wear a “counter-cross”. And so, the very encounter yields a response, which is somehow distorting. Moreover, the polemical move, intended to somehow affirm identity, ultimately backfired. The Pope, in a gesture of courtesy and consideration, had tucked away his cross. But at the sight of the Rabbi’s chest plate he felt compelled to expose it. The lesson – the age of polemics should be over; it is time for courtesy and consideration of feelings. That is certainly where Francis was.

9. We can legitimately be embarassed by our religious leadership. I speak here as an Israeli Jew, watching the behaviour of those rabbis who were charged with receiving the Pope. To begin, there was no dialogue – we preached to the Pope, trying to either teach him lessons (what is Jewish election; what are the ten commandments) or suggesting he affirm what is most important to us (fighting terrorism and antisemitism). Compare the level of discourse of the Jewish leaders to that of the Christian leader and share the embarassment. The Pope took pride in 12 years of dialogue with the Chief Rabbinate and suggested a future to that relationship. The Rabbis glossed over it, making no mention of it. When state appointed rabbis are obligated to meet the Pope against their own deeper convictions or the sentiments of their communities, a show of dialogue and recognition is a rather poor show.

10. We need to start doing our own homework. One cannot divorce rabbinic views of the Pope from broader views of Christianity that were aired in the weeks leading up to the papal visit. Rejection of Christianity as idolatry may have taken extreme forms in some individual cases, but was a subtext of rabbinic discourse in various Orthodox and Ultra-Orthodox media. The Chief rabbis may have had no choice but to meet with the Pope; their communities had nothing good to say about it. Blogs, op-eds and statements issues by other rabbinical authorities point to a refusal to learn, accept facts or reconsider common halachic views. Testimonies of crusader violence appeared everywhere; Christian apologies were never acknowledged. Claims that Christianity could not possibly accept Judaism theologically were repeated; no awareness was shown of theological progress of the past 50 years. In a unanimous choir, rabbinic voices considered Christianity to be idolatrous; all rabbinic voices to the contrary seemed to no longer exist. This is a very sad state of affairs. Christians have done their homework. They are ready to move from the past to the future. Our rabbis are rewriting the past, obliterating positive views of Christianity and keeping us in the past, without possibility of moving forward. Pope Francis is a man of hope. Hope requires moving beyond past memory. Rabbinical authorities would have their communities forever “faithful” to the memory of pain, devoid of hope. We need much work, much education, much rethinking. And, to return to our starting point, we probably also need a lot of prayer.