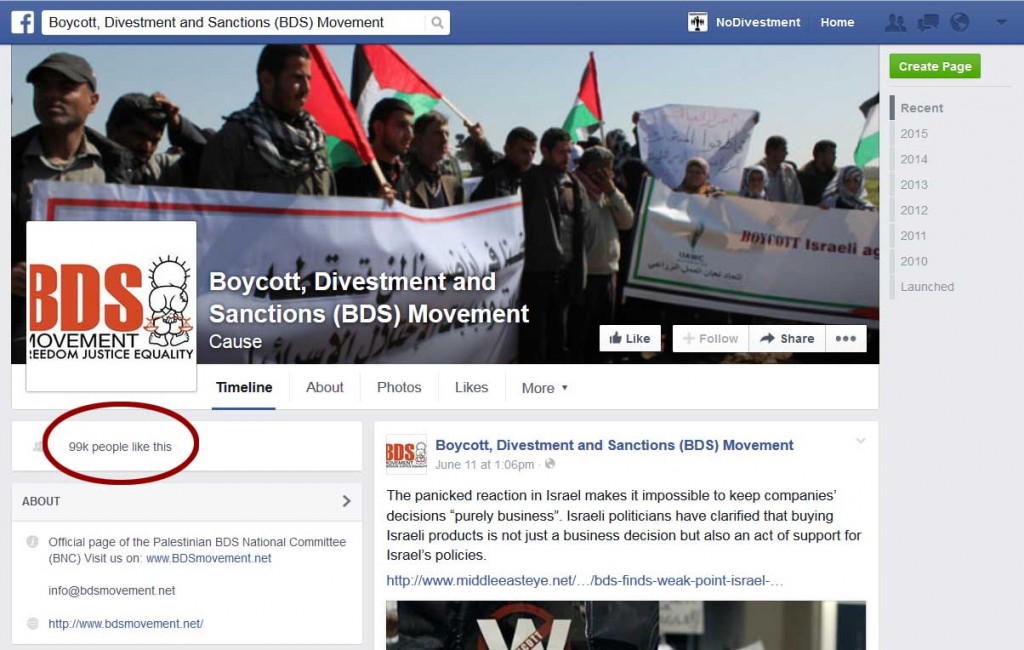 Israel fights wars against terror, against misinformation, and against hypocrisy. They do so to protect her citizens’ freedoms and to protect the ideals of any Democratic state.  They do so to provide a home and safe haven for Jewish citizens outside of Israel who are threatened or intimidating where they live for simply being Jewish by providing them a right of return (e.g. see Paris).

By the end of this week an army of 100,000 avatars (e.g. people) will be standing for hypocrisy and promoting anti-semitism online.  The Facebook page for the Boycott, Divestment and Sanctions (BDS) Movement will be reaching 100,000 “likes” within the next few days.

99,875 people around the world have “liked” the official page of the Palestinian BDS National Committee (BNC) since the Facebook page came online in 2005.  It is growing at or around 1.5% per week.

For decades, Israel has denied Palestinians their fundamental rights of freedom, equality, and self-determination through ethnic cleansing, colonization, racial discrimination, and military occupation.”

This is incitement.  These are “word grenades” on the battlefield that spread hatred on false information.  These words need to be muted and combated with the truth.  With Hasbara.

A couple years ago I left my job as the head of digital strategy for B’nai B’rith International.  I enjoyed my work and valued what the then-170 year old organization has done for Israel and continues to do for the Democratic Jewish State of Israel.  I continue to support Israel through volunteerism.  While at B’nai B’rith, I helped mature the organization’s social media channels.  I, like many of you, are concerned about the growing voice of hate and anti-semitism that is this BDS movement.  And I, like hopefully many of you, are concerned about this quantifiable benchmark that they will be reaching this week of 100,000 “likes.”

As a passive Times of Israel blogger and thus someone armed with the power of the pen (or keyboard in the 21st century), I was brainstorming about how we as a community could join the social media battlefield and stand for Israel while fighting BDS.  I’m in the early stages of thinking through this strategy and would welcome your suggestions in the comments section of this blog; but for now, I’ve created the Facebook page #NoDivestment that I will try to keep up-to-date on #BDSFails.  I’ve also claimed the website domains www.nodivestment.org and www.nodivestment.com for a future developed campaign website.