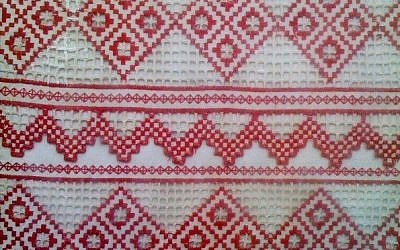 So when I read a notice of the film, “1945″ about the return of Jews to a small Hungarian town after World War Two being screened in a small theater in a shopping center, I decided to go.

I was somewhat resistant, however.

Were they going to exploit the Holocaust?

Other filmmakers had done so.

Their prisoners often looked too well-fed, rescuing American soldiers too clean cut, Germans, in their upside down chamber pot helmets, too anonymous.

I sat there in the theater, arms crossed.

“1945” was in Hungarian with English subtitles.

Hungarian!   A completely unrecognizable, click-clackedty language.  I had always believed that if enemy extraterrestrials ever come to earth they would speak Hungarian.

“1945″ opens with the Town Clerk of an unidentified Hungarian town, shaving. He is preparing for his son’s wedding.  His wife, remains in bed.  After everyone leaves, she rises, takes a hypodermic needle and releases a few drops into a handkerchief and inhales it.

Two strange, mysterious, silent men, one middle aged, one younger arrive at the rural train station. The older man is dressed in a long coat and fedora like a man of an earlier era. He has a beard.  The  younger man wears  a jacket and a cap. They have brought two wooden casket-like boxes.

The men walk behind the horse and wagon carrying the two boxes.

Why did they come? Where are they going?

People look out of their dirt streaked windows.

The men continue to walk like pallbearers following a hearse.

The residents conclude the men are agents of former neighbors, the Pollak family whose house and its contents, drugstore and automobile were taken by the local residents. One woman begins to furiously search in a chest of drawers for a document from the Town Clerk giving her and her husband the Pollak’s house.

I am suddenly reminded of the story of my mother and her sister. After they were liberated from a slave labor factory in May, 1945, they, returned to their hometown of Ruscova, Romania. They found people living in their former home. They sold the house and fields to them for a pittance and paid a man to smuggle them into the American Zone of Occupied Germany.  The only thing my mother took with her was a white linen tablecloth embroidered by her mother.

Sixty-five years later, my sister went to the house and knocked on the door.

The descendants of  the buyers answered. They made her wait outside until they returned with the deed.

Hovering on the periphery of the “1945” are Soviet solders, driving to and fro in their jeep.

Elections were coming and some of the Hungarian young people have announced that they want  a change.

Hungary’s punishment for its collaboration, betrayal of its citizens, seizure of their property, was just beginning.

Why did the two men come to the town?

The reason, in the end, is irrelevant.

But for some of the natives, consumed with guilt and greed, the very presence of these strangers causes their self-destruction.