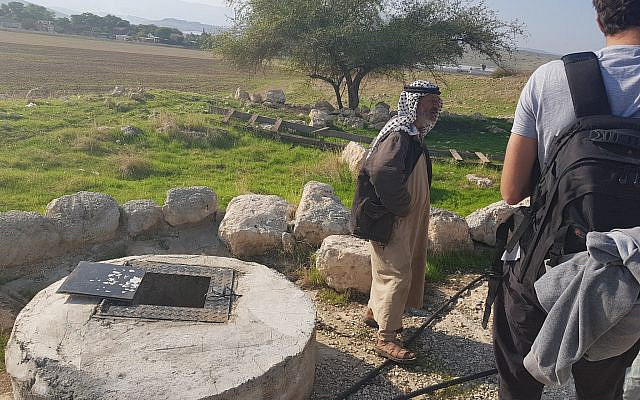 It turns out that there is quite a debate about the origin of this midrash, and it may even be that the first known reference is in a travelogue published by Alphonse De Lamartine. He claims to have heard it from a Arab peasant when visiting the Holy Land in1832.  It really doesn’t matter where this story comes from. And, while the Temple Mount/Haram Al Sharif looked much different before King Herod built a platform for the second Temple, it is hard for me to imagine a field there. The real point is that, long before Henry O, we learn about the holiness of love expressed as an understanding that “There is somebody I love who needs something I have more than I do, and I have enough.”

In our Torah portion, brothers also embrace.  In an emotional scene that brings the house down, Jacob and Esau hug after being estranged for 20 years. When Jacob offers gifts to Esau, Esau’s first response is, “Yesh li rav,” “I have enough, my brother, let what you hae remain yours.” (Genesis 339) Jacob insists, “Yesh li khol,”  “Please accept my present which as been brought for you, for God has favored me and I have everything I need.”  (Genesis 33:11) Despite the attempts of classic rabbinic commentators to claim that Esau actually tried to attack Jacob (Because Esau is secret code for Rome.), the fact that Esau does eventually take Jacob’s gift, and questions whether Jacob wanted to remain as close to Esau as Esau wanted to be close to him, the plain meaning of the text is one of genuine reconciliation.

We are not told that this is where the God chose to build the Temple. Based on Bereshit Rabah, Rashi, and other classical commentators tell us that the Temple was built where Jacob had his vision of the ladder to heaven last week, even though the text says that Jacob called the place ”Beit El,” and it had   previously been called “Luz.”

The fact is that there was no great love between the brothers when Jacob dreamt of the ladder. He was fleeing because he had cheated Esau, who then vowed to kill him. Twenty years gave both of the brothers time to mature and to change.  The night before Jacob and Esau hug, Jacob wrestles with an unnamed being. I have written many times in the past, that while one classic midrash says that Esau wrestles with an emissary of Jacob, I believe that Jacob wrestles with and takes responsibility for the part of himself and his past that he has up to this point denied, and projected onto Esau. While neither the place he wrestles, nor the place where he hugs are identified with Mount Moriah and the Temple, Rabbi Arthur teaches us in “Godwrestling” that wrestling can be a form of embrace.  In one location Jacob and his projection of Esau embrace. In the second, Jacob and the real Esau embrace.    in both places, just like the location of his dream, he sees God. Jacob calls the place of his wresting, “Peniel” (the Face of God), “because in this place I have seen God face to face.” (Genesis 32:31). When Jacob embraces Esau he says, “for to see your face is like seeing the face of God” (Genesis 33:10).   Last week’s Jacob initially missed God’s Presence, and then wants to strike a deal with God for what he wants God to do for him.   The Jacob who wrestles the unknown being eventually surmises that this is God, and demands a blessing.  The Jacob who embraces his brother wants to give.

Which Jacob do we want to be?  Who do we want to claim as our ancestor?  We must acknowledge that we have all the Jacobs within us, but we must aspire to become the embracing brother who can offer our brothers and sisters some of what we have, out of empathy with their needs.   We live in a world that could do a much better job of combatting poverty and providing for all, if we thought more about what we can give than about what we want to take. Conflicts between countries and peoples, including our conflict between Israelis and Palestinians, would be much more solvable if we could all start from the point of “I have enough.” Can we imagine negotiations in which the argument is that each side insists that they give, and the other individual/party/country/ people accept?

This is not to sweep under the rug the fact that there are rich and poor. There truly are both people and peoples who truly do not have the most basic requirements for survival. But even then we can also think about what others need.   I don’t want to be misunderstood as claiming that Israelis and Palestinians must equally make concessions. It is Jacob who must acknowledge that he has wronged Esau, but Esau must give up his dreams of murderous revenge.

Just a few minutes ago I contacted the police because the security guard of the Rotem settlement attacked and wounded two Palestinian cows. He claims for his flock the area they were in.  Earlier this week unknown individuals plowed land along the road to an unauthorized outpost, even though Israel recognizes the area as private Palestinian land. That same day we visited a non-Jewish family that the Jewish State denies access to water. Since the Jewish settlement of Roi was set up, the non-Jews cannot access some 70 water cisterns, and a few wells.  Some of them have been demolished and/or filled in.  We are told that we cannot raise taxes on wealthy corporations or individuals because they won’t say “I have enough. What do others need?” Rather, they will flee to where they can have more. In all these cases, conflict arises because we are focused on what we want to take, and justify our greed through projecting greed and evil intent on the other. Our Torah portion teaches us that it does not need to be this way.

I spend so much of my time in contested fields and endangered homes, protecting the oppressed from those who don’t understand that they have enough, and refuse to think about the needs of others. Often they justify their greed on the basis of real or imagined wrongdoings by others that somehow justify their own wrongdoings.

I dream of a world that becomes the Temple because it the place where brothers and sisters embrace.