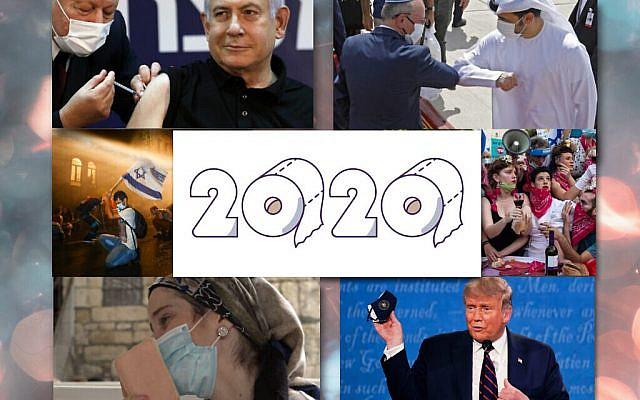 2020 was not a happy year for the world in every way, and although its numbers together had a special effect, it was accompanied by disturbing events with the outbreak of the coronavirus disease (COVID-19) worldwide. But besides this, it can be said that 2020 is also a busy year in terms of the diversity of political, economic, and social events. In the continuation of this report, 20 significant events of 2020 are mentioned.

The fight against terrorism was a determination that began before 2020, intending to target Abu Bakr al-Baghdadi, the criminal leader of the ISIS terrorist group, and before that, killing bin Laden and other petty terrorists. But Qasem Soleimani was a terrorist who planned sabotage operations and inhumane interventions in the region until his death. He was shot dead by attack drones at Baghdad airport on January 2nd as he prepared to assassinate Americans in Iraq.

A few days after the death of Qasem Soleimani, a terrorist affiliated with the Islamic Republic, Ali Khamenei, the Iranian regime leader, ordered the Revolutionary Guards to fire rockets at the US headquarters in Iraq in response to Soleimani’s death. On the night of the attack, the Revolutionary Guards air defence targeted and destroyed a Ukrainian passenger plane flying from Iran International Airport to Canada with two surface-to-air missiles, killing all the passengers on the Ukrainian plane. (Evidence suggests that the Iranian regime intended to blame the United States for the attack in response to the missile strikes on Iraq.)

The International Expo 2020, which was scheduled to occur on October 20th, 2020, in the port of Dubai in the United Arab Emirates, was cancelled due to the spread and dangers of the Coronavirus. This global exhibition is one of the most important international events held every five years in a country and lasts for six months, and during this exhibition, the latest achievements and human creations from all over the world are displayed. This exhibition’s importance for countries is so great that it is the third most important international event in the world after the World Cup and the Olympic Games.

It was not until January 2020 that the US Middle East Initiative, known as the Treaty of the Century, entered the debate. The plan included a peace proposal between Israel and the Palestinians, proposed by US President Donald Trump and initiated by Jared Kushner, a senior adviser to the US president. Under the plan, parts of the Palestinian territories in the West Bank and parts of East Jerusalem will be ceded to Israel, and in return, Israel will agree to an independent Palestinian state in the other half of the West Bank and the entire Gaza Strip and several neighbourhoods in East Jerusalem. According to this plan, the city of Abu Dhabi was considered the capital of Palestine instead of Jerusalem. Eventually, the project led to the “Ibrahim Pact” and the normalization of relations with some Arab countries in the region, which led to the Palestinians’ dissatisfaction and their willingness to renew ties with Israel in November 2020.

The global COVID-19 pandemic, although its epidemic began in the fall of 2019 in China, spread beyond the country’s borders by the beginning of 2020 and became global. Finally, on January 30th, the World Health Organization declared a global epidemic of the virus. Corona left millions sick and hundreds of thousands of dead, and while affecting the loss of millions of jobs, it shrunk the world economy to a minimal extent. Coronation and homelessness have also increased social media’s role globally, marginalizing the functioning of more traditional media.

In February 2020, the United States and the Taliban signed a conditional peace agreement. Mullah Abdul Ghani and Pompeo signed the deal with US Secretary of Defence Mark Speer in Qatar. Siddiq Siddiqui, the spokesman for the President of Afghanistan, said that the terms of the agreement were not for US troops’ withdrawal but for the Taliban to renounce violence. The deal was violated shortly after the Taliban continued their attacks on Americans in Afghanistan.

In the most important event of 2020, the UAE government, in an innovative initiative, signed a US-mediated peace treaty with Israel, which is unprecedented since 26 years ago, when Jordan reached an agreement with Israel. The agreement was signed by UAE Foreign Minister Abdullah bin Zayed Al Nahyan and Israeli Prime Minister Benjamin Netanyahu on September 15th, 2020, at the White House in Washington, DC. Israel’s peace treaty with the United Arab Emirates is officially known as the Ibrahim Peace Agreement, which eventually led to the normalization of diplomatic relations between the United Arab Emirates and the Israeli government and is a significant development in the Persian Gulf region.

10 – The death of George Floyd and the American racial riots

George Floyd was a black American criminal who was killed by an American policeman on May 25th, 2020, and after the video of his death was recorded by the police by passers-by who witnessed the incident and published on social media, there were widespread demonstrations across the United States. There were protests against racism that lasted for a long time.

The Iraqi people’s demonstrations against the puppet government and under the influence of the Iranian regime continued in intensity in 2020. With the intervention of the militias affiliated with the Iranian regime, the popular mobilization group in killing the protesting people became wider. During the protests, Iraqis called for the Iranian regime’s ouster and the improvement of the economic situation. During most months of 2020, Iraqis took to the streets, sometimes burning the offices of Iranian-affiliated groups such as Hezbollah and Kataeb.

The horrific explosion on the evening of August 4th, 2020, in Lebanon can perhaps be considered an unfortunate event that occurred due to the government’s recklessness close to the Lebanese Hezbollah terrorist group and caused tens of thousands of Lebanese to suffer a great tragedy. The bomber struck shortly afternoon in front of a rally in the Lebanese capital, Beirut, destroying several buildings in the Ashrafieh district. The blast caused extensive damage to facilities around the site of the explosion. The incident killed 220 people, injured about 7,000, and left more than 110 missing. Also, according to the Beirut governor’s office, more than 300,000 people have been left homeless due to the incident. The intensity of the explosion (equivalent to 1.2 kilotons of tonnage) was such that it is considered one of the most vigorous non-nuclear eruptions in history. Irresponsible storage of 2,750 tons of ammonium nitrate by the Lebanese government of Hezbollah at the customs of Beirut’s port without sufficient security was the reason for this tragic incident, which led to large-scale protests against the government and eventually led to the resignation of the Diab government.

The cancellation of the 2020 Summer Olympics in Tokyo was another event this year, with a one-year delay. The 2020 Olympics have been cancelled due to the Coronavirus epidemic and have been postponed for a year at Shinzo Abe’s suggestion, the former Prime Minister of Japan, and with the approval of the International Olympic Committee, and are scheduled to take place in the summer of 2021.

14- The first virtual meeting of the United Nations

The UN General Assembly convened virtually on its 75th anniversary of the Corona Pandemic. In September 2020, the summit was held without world leaders’ physical presence and through video conferencing, which is a new way of having global discussions.

The disputed region between the Republic of Azerbaijan and Armenia witnessed another bloody war in 2020, which started with an initial clash on contact between the Armed Forces of the Republic of Azerbaijan and the Defence Forces of the Republic of Artsakh in the Nagorno-Karabakh region. And the conflict escalated to the point that the two sides heavily bombarded each other’s areas under their control. This battle of several days left many casualties on both sides and finally subsided with Armenia’s defeat and the handover of the disputed region to Azerbaijan.

France, which was on the path to calm after the 2019 yellow vest uprising, was in crisis in 2020 with the onslaught of Islamic extremism. The re-publication of the cartoons of the Prophet of Islam by Charlie Abdo and the murder of a French teacher by a Chechen Islamist led Macron to call it an attack on France. Subsequently, Turkish President Recep Tayyip Erdogan severely attacked Macron, sparking a new wave of crisis between France and Islamic countries.

The US presidential election was held on November 3rd, 2020. This election can be considered the most controversial election in American history. In this close contest, Donald Trump from the Republican Party and Joe Biden from the Democratic Party competed. After many struggles, Joe Biden was declared the winner of the election, but Trump, saying that the Democrats cheated in the election, did not accept the result and took the election to court. Great America won. One of Trump’s objections to the announced development was the postal votes that continued to be received until a few days after the election. It was the 59th presidential election in the United States and had the highest turnout since 1900.

19- Killing of the father of Iran’s nuclear warhead

In late November 2020, Mohsen Fakhrizadeh, the father of Iran’s nuclear warhead, was shot and killed near Tehran.  Narrations differed about how he was targeted, first, it was announced that an armed team had removed him, then circles close to the security services in Iran, following the scandal caused by the lack of security, said that the shooting at Mohsen’s car  Fakhrizadeh has been using “automatic weapons”.  According to this narration, in this assassination of a Nissan car that was stopped 150 meters away from Fakhrizadeh’s car, “several shots were fired from a remote-controlled automatic machine gun”, which eventually led to Fakhrizadeh’s death.  An Iranian military official has also confirmed that artificial intelligence and satellite control were involved in the killing of Iran’s nuclear warhead.

As the year 2020 draws to a close, both the coronavirus and the announcement of the emergence of a new, mutated version of the coronavirus have made headlines. With the development of two corona vaccines by the world’s two largest pharmaceutical companies (and two other Chinese and Russian companies), global vaccination is expected to begin in most countries worldwide from the beginning of 2021. A vaccine that is up to 90% effective in preventing coronary heart disease. Modern America, another American company, declared its success in this field by announcing the 95% immunity of its vaccine. But in mid-December 2020, the announcement of the emergence of a new and mutated strain of the coronavirus made headlines, raising renewed concerns and tightening restrictions worldwide.

But the crisis in the world continues.