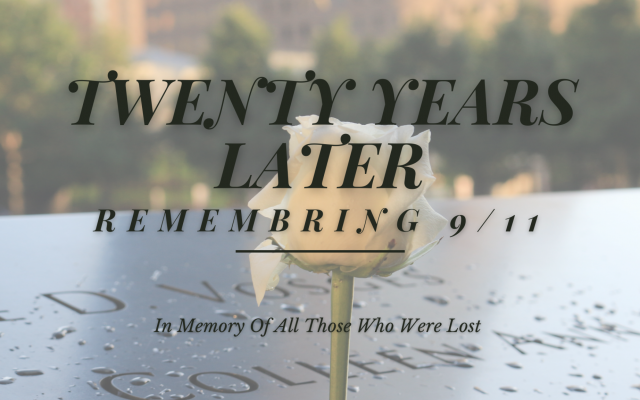 Gone but never forgotten. Today we mourn the victims of the worst terrorist attack in the history of the world. Police, EMTs, firefighters, first responders, the passengers on flight 93, average civilians, the military and all heroes who risked their lives during such an unprecedented tragedy will forever be cherished in our hearts.

America represented the head of the snake of Western democracy to Jihadists like Osama Bin Laden and his militant Islamic group Al-Qaeda. They were determined to destroy it. Values like freedom, tolerance and educating women were too much for the terrorists to handle so they took deadly action.

The Islamists believed it was the duty of the entire Muslim world to join forces and destroy the west. An extremist world-outlook of pure evil resulted in over 3000 dead. There were lives taken from citizens of over 78 countries, families broken, the Pentagon was hit, the World Trade centers collapsed, and there was an economic crash sending shockwaves across the globe. Evil won the day, but then it was America’s turn.

September 12th, 2001 was considered one of the most unified days in American history. Despite the nightmare of the day before, we saw the best of America. Neighbors checking up on one another, the sense of togetherness, red white and blue everywhere and a high of patriotism.

President Bush’s iconic “I can hear you!” Mike Piazza’s heart lifting home run. From the ashes of despair came calls of hope. America was vulnerable, but felt stronger than ever.

The aftermath of 9/11 still penetrated Americans’ hearts to their core. Lives returned to normal but no one was the same. Even 20 Years later, sparks of grief, hope, despair, community and the roller coaster of emotions is still ingrained within the American spirit.

Rather than breaking apart in confusion and despair, America rose to the occasion and built the 1776 Foot Freedom Tower. This maverick of engineering and powerful symbolism gave the world a message from America that you can inflict damage, wound or attack the United States, but it will ALWAYS rise bigger and stronger than before.

20 years later, America is the world juggernaut and superpower ensuring justice, freedoms and security across the globe. It waged war on terrorism to never allow such evil from hitting its shores again. No challenge is too big for America, after all, it is the country that broke free of monarchy, ended slavery, defeated the Nazis, transformed the western world into one of tolerance, freedom and democracy and still overcomes struggles everyday.

These values were attacked 20 years ago, and although evil won on that day, America wins the war of ideas, morality, and ethics. Never will a threat, whether it is Jihadist, Communists, Fascists, Tyrants or any form of evil from abroad destroy these values Americans hold so dear.

We appreciate the values fought for by George Washington, Thomas Jefferson, Benjamin Franklin, Frederick Douglass, Martin Luther King Jr, passengers on flight 93 and all who served in the military especially after 9/11.

These values originate from Americas’ founding creed written within the Declaration of Independence, “We hold these truths to be self evident, that all men are created equal.” Name another country with a creed, a moral code, a promise as powerful as the United States of America.

America is not perfect, but its values are top-notch compared to any other country in the world. These values are a threat to evil who want to abolish liberty in indoctrinating people under the misplaced outlook of fundamentalism or tyranny. May 9/11 be a promise forever that America will rise above the evil in the world and live up to its founding creed that equality, freedom, liberty, justice and security will never be stripped from its citizens.

When President Barack Obama announced “Justice has been done” after a 2011 operation which assassinated Bin Laden, the same sparks of patriotism and unity filled America. Parades in the streets, cheering, tears and joy were felt throughout the United States, as well as across the globe.

These cheers were not closure for the 3000 souls taken on 9/11 as they are an irreplaceable loss. However, we do cheer that justice did take place and that if anyone abroad harms us, we will go after the one who imposes such harm. America lived up to that promise and the perpetrator of 9/11 met his justice.

Today the world has changed, but the memory of 9/11 has not. 20 years later, to all those who lost their lives and to their families, we will never forget you, we love you and you will forever be in our hearts. May their memories forever be a blessing and may no evil such as what was experienced 20 years ago ever happen again in the United States or anywhere else in the world.