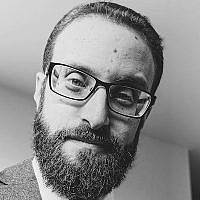 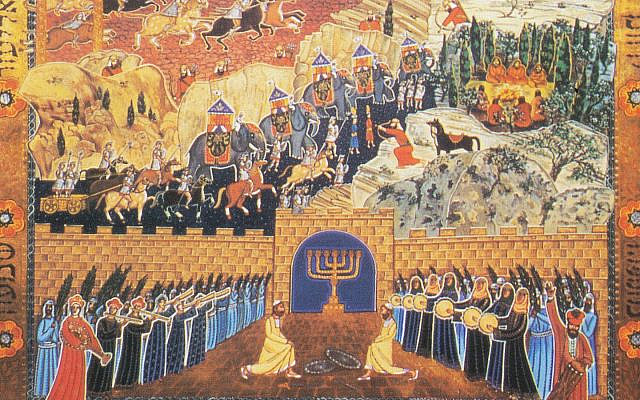 “The Story of Hanukkah” by Ori Sherman. (Magnes Collection of Jewish Art, University of California, Berkeley)

Imagine you are Mattityah of the Hanukkah story. It is the year 166 BCE, and as you sit around the Shabbat table with your family, enjoying your meal, there’s a loud knock at the door. You open the door to find a Greek general who addresses you as you stand with your family before the assembled community and says: 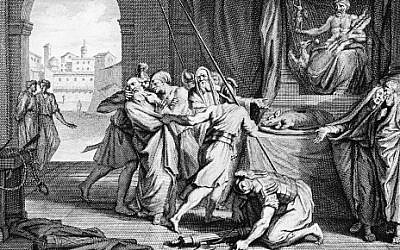 Be the first to sacrifice to Zeus. If you do, you and your children will be honored with the title of Friends of the King, and you will be rewarded with silver, gold, and many gifts (Maccabees 1 Chapter 2).

How would you respond? The choice is either to be ‘friends of the king,’ gaining title, position, wealth and power, or to give up all of that to hold onto something you find even more valuable, the tradition, law, and vision of your ancestors, the Jewish people.

What is the decision that you will make? Mattityah takes the opportunity to make a bold speech before his family and all of the people:

My children, my relatives, and I will continue to keep the covenant that God made with our ancestors. With God’s help, we will never abandon his Law or disobey his commands. We will not obey the king’s decree, and we will not change our way of worship in the least (Maccabees 1 Chapter 2).

He declares with absolute confidence, that not only will he, Mattityah, remain loyal, committing his life to the cause of his forefathers, but so will his immediate, and extended family. 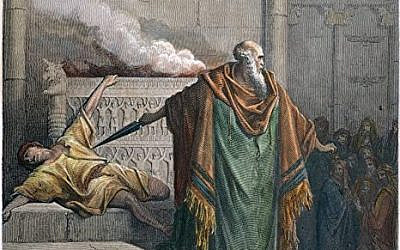 When Mattityah finishes his speech and a Jew approaches the pagan altar to sacrifice a pig to the Greek deity, Mattityah draws his swords, as do family members who are standing beside him, and they kill the apostate Jew along with the Greek general and his soldiers. 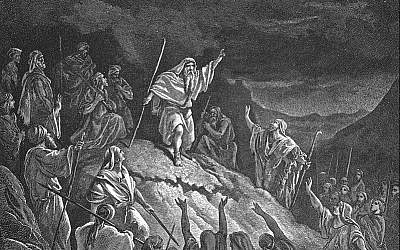 Mattityah then proclaims: “If anyone is zealous for the laws of his country, and for the worship of God, follow me (Josephus Antiquities XII 6)!” He runs to the hills with his family and all those dedicated to Torah. They prepare themselves to fight, against all odds, for the freedom to practice Torah and misvot, and to re-establish proper worship of God in the Beit haMiqdash.

Mattityah, being a traditional Jew, views the scenario he is in through the eyes of the Tanakh and so, he models his behavior after Moshe’s actions at the golden calf. When Moshe saw the nation worshipping the golden calf, he took action and proclaimed: “Whoever is for God, come to me (Shemot 32:26).” Moshe then directs these Jews to draw their swords and fight against those who have desecrated the name of God by worshipping the golden calf. The similarity in his phraseology and action speaks to the fact that the scenarios are similar. The fight was not solely with the Greeks. Jews turned on their own from God to prostrate before foreign deities.

In the Hanukkah story, there was a split in the nation. A civil war between Jews who valued Torah and those who felt that Judaism and Jews practicing it were a hindrance to their joining the ‘enlightened’ Greek community. So, the latter group sought the help of the Greeks to further their aim by eradicating Jewish law and life.

During the second century under Antiochus III, prior to Mattityah’s encounter with the general, Jewish life in the Temple was supported by the Greeks. The Greeks paid for the sacrifices in the Temple, paid for its maintenance, offered tax benefits for Temple supplies, and for those who worked within it (Josephus Antiquities XII 3 140-145 also note Maccabees 2 3:1-3). Additionally, Antiochus III made it illegal, according to Greek law, to desecrate certain Torah laws. Suppression of Jewish law and cessation of proper Temple worship was initiated by Jews.

At that time there appeared in the land of Israel a group of traitorous Jews who had no regard for the Law… became so enthusiastic… they went to the king and received from him permission to follow Gentile customs (Maccabees 1 1:13-15).

Since the Greek law allowed for the rule of Torah law in the land of Israel, these Jews sought approval and protection from Antiochus IV to desecrate it.  They then went further, bribing their way to the position of High Priest at the Temple, ending the “existing royal concessions,” and shifting the worship in the Temple from Jewish ritual to pagan ritual. The books of Maccabees and Josephus tell us that it was this group of Jews who requested to build the Gymnasium in Jerusalem, and that “they hastened to take part in the unlawful proceedings…” When it was time for the games, these priests would leave their Temple service, drop their vestments, and take part in the arena (Maccabees 2 1:7, 3:10-15, Josephus Antiquities XII 5 1 240-242). Menelaus the High Priest, and Jason the High Priest before him, led the efforts and “compelled his nation to transgress their own laws” (Josephus Antiquities XII 9 and Maccabees 2 5).

These ‘traitorous’ Jews were very successful in almost completely eradicating Judaism. When Mattityah’s family finally retook the Temple to reestablish Judaism as the law of the land in 165 BCE, there was no Menorah to light (Talmud Bavli Avoda Zara 43, Menahot 28b and Rosh haShanah 24b). The Temple was in disarray, robbed of its vessels from years before, at least since 169 BCE (A Different Light: The Big Book of Hanukkah, pg. 57). The message of Hanukkah really comes into focus when we zoom out of the scene of finding the flask of oil and recognize the environment within which Mattityah arose from the suburbs, along with his family, to ensure the continuation of Judaism. This was a fight for much more than finding pure oil for the Menorah or being freed from an oppressive army. This was a fight for the future of humanity, a civil war about whether secular society should enlighten the darkness of Jewish life or if Judaism should be the light unto the nations.

Mattityah and his family wanted to re‑establish the model society envisioned by the Torah and prophets.  They firmly believed that Judaism had the best model for how to run society with a political, economic and legal system and it was our role to be a mamlekhet kohanim veGoy kadosh, a model nation, lighting the way for how others can also build their societies (Shemot 19:6 and Yeshayahu 49:6, 60:3). This was articulated well in Mattityah’s speech to his sons on his deathbed, as he reiterated what they were fighting for, he said it is “to recover your ancient form of government… (Josephus XII 6)”

Mattityah imbued his family, his bayit, with this vision and knew it penetrated their very being. That is why he was able to say with such confidence to the general that not only won’t he prostrate before the idol, neither would his immediate family nor his extended family. His son Judah continued to embody and impart this message (Josephus XII 7).

After the war, those that sided with Mattityah and his family lit a victory symbol outside their homes, showing their bayit’s allegiance to that ideology, thereby making it clear what they and their household stood for. Unfortunately, the infighting amongst Jews continued post the rededication of the Temple since there were still Jews who despised the Torah’s model society. The symbolism of the light at one’s entrance, lit specifically at twilight, was meant to show that one’s home, one’s family, was aligned with Mattityah and his family, celebrating their triumph (Midrash Pesikta Rabati 2:1, Megillat Antiochus and Talmud Bavli Gittin 57). This is the message encoded in the misva of the lighting of the Hanukkah lamp. It is the reason the misva of Hanukkah lighting is specifically ner ish uBeito, one light for each bayit, each household. Unless there were two main entrances, in which case, one would have to light at both mipenei heHashad, in case of suspicion that one’s family was not aligned with Mattityah and his family.

This battle continues today, with many viewing Torah and misvot as ‘backward,’ ‘antiquated,’ or even ‘immoral,’ in light of ‘modern’ ethics and ‘philosophy.’ So, the question is not whether or not we have the freedom to practice religion, it is whether or not we care to see its value to our lives, our families and the world. So, without the sword against our neck, without the Greek general towering over us, what do we choose?