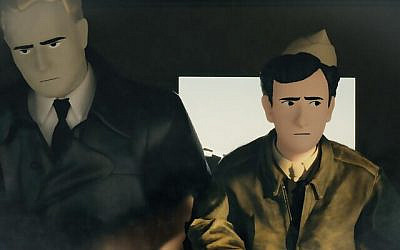 After 2021 Academy Award winner, Colette, directed by Anthony Giacchino, the animated documentary short film available on Netflix, “Camp Confidential: America’s Secret Nazis,” about Nazis deported in the USA during WWII, directed by Daniel Sivan and Mor Loushy, was shortlisted for the Academy Award documentary short category . The final five nominations in the category will be revealed on February 8, and the 94th Academy Awards ceremony is slated to be held on March 27.

Could you tell us how you both met ?
Daniel Sivan and Mor Loushy: We met 16 years ago when we were still aspiring filmmakers. Mor was at film school and I suggested producing her debut doc “Israel LTD.” and ended up editing and producing it, and the rest is history – we basically were creative partners from day one. It’s not always easy living and raising kids with your partner in the editing room, but that’s the only life we know. Now we have two kids running around, so they kind of grew into this life of their two parents dragging them all over the globe makings docs.

When did you decide to work on that subject ?
Daniel Sivan and Mor Loushy: Two years ago we were living in L.A working on a docuseries for NETFLIX titled “The Devil Next Door” about John Demjanjuk who was accused of being a monstrous Nazi camp guard nicknamed “Ivan the Terrible”. We were approached by producers Benji and Jono Bergmann who have been developing a project about PO BOX 1142. At first we were hesitant – it’s not easy dealing with stories about the Holocaust – it really does take a tole on you, but this story was so unbelievable we were intrigued. It sounded like an urban legend – a Nazi POW camp near Washington D.C were Jewish guards were interrogating Nazis scientists… We mean, who could believe this really happened?! But once Jono and Benji introduced us the surviving characters and to censored audio recordings – we just knew this is a story that must be told!

What did you think of the short movie Colette ?
Daniel Sivan and Mor Loushy: It’s a beautiful film and very emotional. To us as Jewish it of course struck a chord. Every story featuring Holocaust Survivors is so important to tell, as they are passing away, and their testimonies is all that remains of these atrocities.

Does animation change the way to direct a movie ?
Daniel Sivan and Mor Loushy: Animation is a wonderful tool in directing a doc. Unlike our previous films, that were very much based on archives, here we had an opportunity to dream and create the scenes that truly portray the authentic audio testimonies and interviews. It was a great experience working with such talented artists that truly brought the story to life, while staying highly accurate to the historical facts and nuances.

What do you think of the interview Lucie Fouble gave us ?
Daniel Sivan and Mor Loushy: This is a great article and hits the nail on its head.

Should-we change the way we look at Werner Von Braun and Space Quest ?
Daniel Sivan and Mor Loushy: The character of Werner Von Braun is still considered an “American hero” and we believe it’s about time the world acknowledges not only his achievements in space aviation, but criticizes him for his past. No scientific achievement is ground to whitewash collaborating with the Nazi regime and whitewashing the past.

Why were you shocked to realize that the operation begun in “1942” ?
Daniel Sivan and Mor Loushy: We don’t know that “Operation Paperclip” officially began in 1942, but Operation Paperclip is presented as “America picking up German scientists after the war”. You can never imagine America collaborating with Nazis during the war – but PO BOX 1142, demonstrates how the U.S was already preparing for the war against Russia long before the war ended. It’s very disturbing to see how fluid “our worst enemy” becomes our ally for a new “worst enemy”. And sadly, we can see that the lesson hasn’t been learnt and that many countries collaborate today with dark regimes based on political and economical reasons, while knowing all too well this action is immoral.

What was Paperclip operation in the end considering what we know now ?
Daniel Sivan and Mor Loushy: We don’t think it’s fair to judge history in hindsight, but as Peter Weiss put it so eloquently in the film “If the means to achieve good ends require you to take bad actions, then the end that you achieve is not worthwhile.”