I was there in the square on Saturday night, November 4th, 1995, when Prime Minister Yitzhak Rabin was assassinated, and I went last night as well, the 22nd anniversary of the murder.  There were friends and colleagues who argued that I shouldn’t go, because this year’s organizers of the rally, Commanders for Israel’s Security and Darkeinu, had tried to “depoliticize” the event by headlining it “We are One Nation”. Their ads for the event did not include the words “murder”, “peace” and “occupation”.  And no mention of the fact that Rabin was killed at the end of a rally whose headline was “No to Violence, Yes to Peace”.  After much criticism, they added the phrase “22 years since the murder of Prime Minister Yitzhak Rabin…”

Yes to Peace, No to Violence

I was one of the signatories of a counter-ad organized by an initiative called The Democratic Camp, signed by many Israel Prize winners and former senior security officials and intellectuals, which called on “the supporters of democracy and peace to  come to the Square.  Our response will be to raise the slogan that Rabin raised 22 years ago – YES TO PEACE, NO TO VIOLENCE.” And they added, “we will call not to forget today those who incite against the seekers of peace, against the media, against the judicial system and against democracy.” 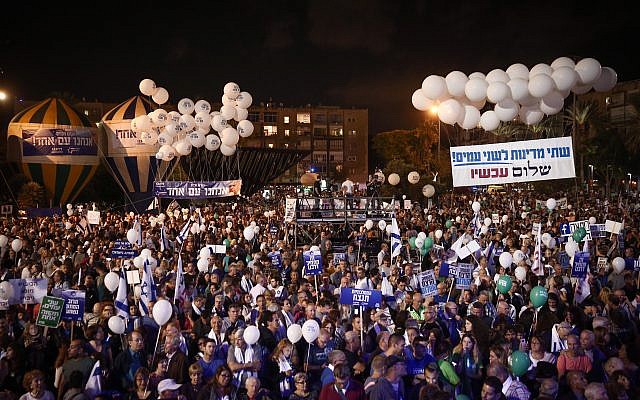 So did I make the correct decision to go? Some friends said that the national religious settlers who were invited to participate in the rally for the first time, would bus in thousands of their people to the rally.  I was sure this wouldn’t happen, and it didn’t.  MK Tamar Zandberg (Meretz) who was 19 years old when the murder took place, one of what was called “the generation of the candles”, was convinced that 90% of the people who would come would belong to the peace camp. She was right.  You could count the number of people wearing kipot (yarmulkes) in the crowd on one hand, and some of them may have been religious doves.

Remembering the Assassin and his Words

I knew that the national religious settlers wouldn’t come en mass, because what Rabin stood for is the antithesis of what they believe in, a man who said at the beginning of his political career that he wouldn’t mind having to visit the Gush Etzion area with a visa, and who in his last speeches called himself “a soldier for peace.”.  And I couldn’t forget what the assassin, national religious-Zionist Yigal Amir said at his trial.  “Without the halachic (religious law) rulings which applied to Rabin from rabbis I know about, I would have find it hard to murder him.  Such a murder must have backing.  If I didn’t have backing, if I didn’t have behind me many others, I wouldn’t have acted.  I did what I did with a clean conscious.”  And I knew that many national religious Jews, particularly in the West Bank settlements, do not in their schools and synagogues note the day of Rabin’s murder, but rather the fact that the same date in the Hebrew calendar marks the death (of natural causes) of one of the 4 mothers of the Jewish people, Rachel.

Yes, there was one settler who spoke at the rally, Oded Revivi, mayor of the West Bank settlement of Efrat.  His words were greeted with a chorus of boos from the crowd.  He was the only one who expressed indirect criticism of Rabin, when he said “we are not propellers”, the word the Prime Minister used to describe the protesters against the Oslo process, “we are 500,000 energetic people who believe in Greater Israel…”  The idea that all 500,000 settlers believe in Greater Israel is also questionable, since a significant percentage of the settlers are “quality of life” settlers, seeking subsidized affordable housing, who would be happy to have affordable housing with the borders of the State of Israel.  And the fastest growing settlements are the Haredi Orthodox Beitar Elite and Modi’in Elite adjacent to the Green Line, 30% of the settlers, again people seeking affordable housing, not Greater Israel.   Revivi said we need a national dialogue between viewpoints, but it was unclear where he would be willing to compromise.

Despite the bland depoliticized ads, the speakers on behalf of the organizers, Major Gen. (Ret.) Amnon Resher, hi-tech CEO and former IAF pilot Koby Richter, Darkeinu Executive Director Polly Bronstein and the moderator all spoke about the murder, against incitement, and in support of the need for peace with the Palestinians.

No to occupation, yes to equality between Israeli citizens

However, the only speaker who mentioned the occupation was Thabet Abu Rass, the Co-Executive Director of the Abraham Fund Initiatives for Jewish-Arab cooperation.  He said: “I am both Israeli and Palestinian, and am speaking to you today in the name of both these identities, and the understanding that they don’t negate each other.  As an Israeli, I demand shared and equal citizenship; as a Palestinian, I see the end of the occupation of members of my people who live without rights in territories under my countries’ control.” 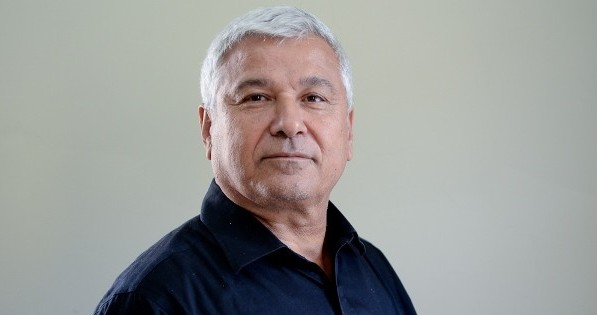 Thabet Abu-Rass: “I am both Israeli & Palestinian” (Photo: TOI)

Another very powerful speaker was Tal Ohana (Labor), Deputy Mayor of Yerucham in the Negev.  She had just returned from an encounter in Morocco with the participation of representatives from Israel, the Palestinian Authority, the North African and Middle Eastern countries,  facilitated by Andre Azoulay, the Jewish adviser to Moroccan kings, who had been one of the primary supporters of the 1995 rally “Against Violence, for Peace”.  Ohana  talked about the initial signs of regional hope after the Oslo Accords were signed, and how it was necessary to continue in Rabin’s path to achieve a peace agreement with the Palestinians.  She added that the Mizrachi (Eastern) Jews like herself should play a central role in this quest.

A similar message was conveyed by the Ethiopian Deputy Mayor of Tel Aviv Mehereta Baruch–Ron (Meretz) in a video clip.

When video shots of the crowd were screened, the camera frequently focused on 94 year old veteran peace activist former MK Uri Avnery who was wounded in the 1948 war, and is still struggling for peace.  As a counterpoint, the camera switched to Likud MK Yehuda Glick, who despite liberal views on other matters, supports the building of the 3rd Temple and Greater Israel, a recipe for disaster and the end of Israel as a Jewish and democratic state.

While the organizers said there would be no civil society and political stands allowed at the rally, Peace Now had a stand in the middle of the square, constantly surrounded by people who were picking up signs to be held at the rally.  I picked up one which read: “We Have Not Forgotten the Incitement, the Murder, The Peace, Peace Now”.  Meretz also had a stand which gave out countless green Meretz balloons held up high by young people, and Hebrew-Arabic bilingual signs against the occupation and for peace.  Other signs, some made by organizations, others personal, read, “Two States for Two Peoples”, “I’m a Patriotic Leftist” and “It’s all Political”.   And the Gush Shalom people circulated a sticker which said “Continuing in Rabin’s Path”, with a photo of Rabin and Arafat shaking hands, and map of Israel, the West Bank and Gaza with the Green Line. The Darkeinu people circulated “We are One People” signs, and there was even a guy wandering around through the crowd dressed as an elegant peace dove. 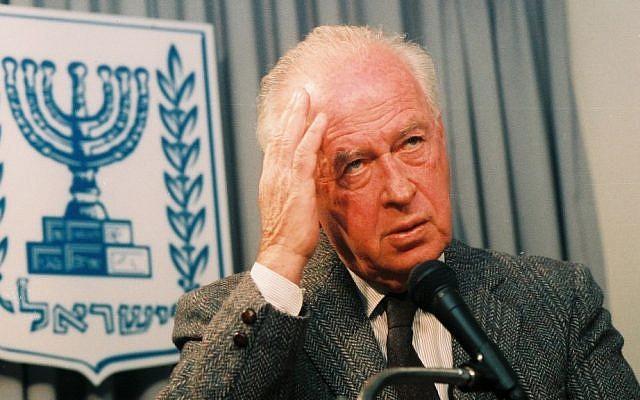 “We have not forgotten. The incitement. The murder.”

And of course, there was music.   Yehuda Poliker sang “Radio Ramallah”, his song dedicated to the old pre-67 Jordanian-Palestinian radio station that introduced rock and roll to many Israelis, which included the line “and imagine what was/and what could be”.  Leading hip hop group Hadag Nachash sang two rousing songs at the end of the rallyץ The first was “Od Yihiyeh Tov” (It will yet be better), whose video has a clear anti-occupation message, and concluded with the protest song Zman L’hitorer (Time to Wake Up), “I don’t believe in weapons/ I believe in music…When the home is deteriorating/It’s time to wake up…” And lead singer Shaanan Street made it clear that these were fighting words, a call to action.

The rally concluded with a rousing rendition of “Shir La’shalom” (The Song for Peace”, sung by a children’s choir, the last song that was sung at the original rally back in 1995.  A video on the screen showed a shot of the blood-stained lyrics that Rabin had held while singing it.  And standing behind the children’s choir, were a group of veterans.  The camera focused particularly on Yuval Rabin, the Prime Minister’s son, who had spoken so strongly this week at the memorial ceremony at Mount Herzl, against today’s continued incitement by the right, and the deligitimization of his father.

This was followed by a singing of the national anthem, Hatikva, led by Shiri Maimon.  With the words “Od lo avda tikvateinu…” (We have not yet lost our hope…).  People then began to disperse, and this time, no three shots rang out.  Only as usual at the end of these annual rallies, the strains of John Lennon singing over the loud speakers.

Imagine all the people
Living life in peace…

About the Author
Hillel Schenker is Co-Editor of the Palestine-Israel Journal, and lives in Tel Aviv
Related Topics
Related Posts
Comments
Advertisement