What was it that enabled the historic window of opportunity to open and for the Jewish state to be founded and, not just survive, but thrive, to the robust success story it is today? The traditional narrative is that it was the support of the United States that was central to the success of the partition vote. Martin Kramer has recently challenged this interpretation in his insightful essay, “Who Saved Israel in 1947?”

Kramer states that even though the support of President Truman, against the recommendations of his own State Department, was extremely significant and important, especially in influencing undecided countries, it was just one of many factors in the ultimate passing of the resolution. He posits that the Soviet Union was actually a major influence in the successful outcome: while the United States recognized Israel de facto, the Soviet Union recognized Israel de facto and de jure! In addition, the United States rigidly enforced an arms embargo in the Middle East and did not aid the nascent state as it fought for its very existence. By contrast, the Soviet Union permitted one of its satellites, Czechoslovakia, to supply Israel with weapons, ranging from fighter planes to rifles that were a significant factor in Israel’s ultimate victory over the invading Arab countries in the War of Independence.

The Soviet ambassador, Andrei Gromyko, invoked the Holocaust in his famous speech to the UN in May 1947 as a major reason for Soviet support. Indeed former president Barack Obama in his maiden foreign policy speech in Cairo claimed that the Jews achieved independence because of the Holocaust. While the sympathy of most of the world for the unprecedented suffering and mass murder of Jews who were not in control of their own destiny in their ancestral homeland was most definitely a catalyst for the passing of the vote, it was not what created the Jewish state. The state was created DESPITE the Holocaust.

Israel was not created by the United Nations non-legally binding resolution 181. This resolution simply took that idea that first began to emerge with Balfour Declaration of 1917 and the League of Nations charter of 1922 that provided international legitimacy for Jewish claims to statehood. While it was a morally significant moment, it was in fact the Declaration of Independence that actually established the State of Israel.

Even though the combination of creative diplomacy and resourceful diplomats in a rare moment of geopolitical fluidity were key to garnering the votes need for the passing of UNGA resolution 181, a nation actually comes into being when, according to Mandelbaum, “a group of people have decided that they do indeed form a nation and are willing and able to defend their own state.” The real heroes of the story are the heroic multitudes of young Jews who sacrificed in blood and were prepared, in the words of the IDF induction oath, to, “devote all of [their] strength, and even to sacrifice [their] life, in the defense of the homeland and the freedom of Israel.” 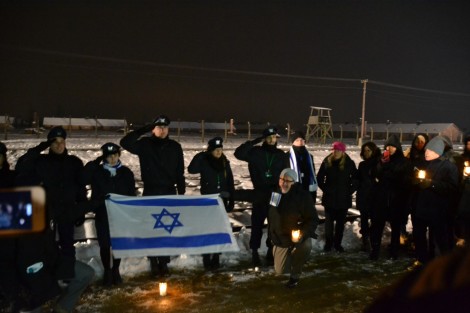 Like the mythical Phoenix arising from the ashes of Europe, our state arose and was reborn. Nobody handed us our country, in the words of Chaim Weitzman, “on a silver platter.” It rose because of the courage of generations of selfless young boys and girls who were and still are prepared to step forward and “walk the walk.” For just as in the previous century, the young pioneers recreated a brave new Jewish land, a “state in waiting,” by planting our land one tree at a time and reviving our language one word at a time and restoring our sense of self-worth one defender at a time, so today we are blessed with a generation of young boys and girls who continue to keep the Jewish/Zionist hope (Hatikvah) alive after 2,000 years to be, “a free people in our own land.” As Natan Alterman wrote,

Tear-stained, wondering, the people ask,
“Who are you?” – softly reply the two,
“We are the silver platter, on which
The Jewish State is handed you!

The young men and women of the IDF symbolize a strength that will never be extinguished. They stand for what it means to have our own country where Jews do not to rely on the pity of their host nations. Yehudah Avner summed up the significance of those fateful four minutes:

Four minutes was all it took to pass UNGA resolution 181 recommending partitioning the British Mandate into Jewish and Arab states, with Jerusalem as an international zone. Four emotionally fraught minutes. Every democracy in the world, with the exception of Greece, India, and the UK (which abstained), voted for partition. Even more surprisingly, the Soviet Union and its satellite states (excepting Yugoslavia, which abstained) voted for the partition on that momentous day 70 years ago. The final tally was 33 for, 13 against, 10 abstentions. More than half the UN’s then 56 member states voted in favor of partition. Were it held today, however, the vote would not pass the threshold.