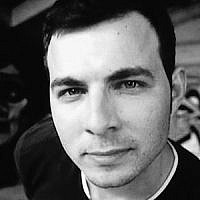 The Blogs
Robert Nachum
Apply for a Blog
Advertisement
Please note that the posts on The Blogs are contributed by third parties. The opinions, facts and any media content in them are presented solely by the authors, and neither The Times of Israel nor its partners assume any responsibility for them. Please contact us in case of abuse. In case of abuse,
Report this post.

From the millions of apps out there, some that made a name for themselves come from the Holy Land. Known for its cutting edge high tech industry, earning the “Startup Nation” moniker in the process, Israel has had its fair share with successful companies and apps that took the world by storm. With Wix and Gett (FKA GetTaxi) becoming familiar names (and the former even getting a prime time slot with a Super Bowl commercial), Israeli technology has proven to be an irresistible force.

Along with the big names there are many apps that provide great services, yet haven’t gained the proper exposure like their foreign counterparts. Here are three Israeli apps we believe should and will be success stories, and more important — organize your lives in the best possible manner.

People tend to have multiple mail accounts — one for work, a private one and that old mail account which is hardly used but still remains there for some unknown reason. In this case, more isn’t the merrier, as more mail means more problems, especially a lack of time to go over email you get during the day. Instead of cracking your brain for finding a solution, it’s much easier to download the MailWise app, which offers a clutter free service that syncs all mail accounts. From Gmail to Hotmail, Yahoo, Outlook and other email providers, the app enables all the servers to unify into one place, saving time and effort, while organizing your life and making email seem less complicated than it should be.

Israel has a reputation of being a country with a great hospitality and outgoing people. While this may be disputable, one thing can be said certainly — Israelis excel at networking and creating opportunities, especially on the business level, being found at the top conventions and exhibitions around the globe. Yet, not all businessmen, whether Israeli or others, share the same mingling skills, requiring more time and effort when taking off to meet at the same places. Knowing how to network is an acquired skill, realizing what kind of people are attending these conferences, understanding who you should exchange business cards with, and planning ahead accordingly. With apps like Bizzabo, networking will be set much better, as you’ll know who is attending and have the chance to interact with before and during the event, creating networking opportunities in an instance.

Shazam is probably one of the best apps to be ever invented. Music lovers all over the world have found an immediate solution for the mind boggling question that erupts every now and then — what the hell is that tune I’m hearing? If you’re in a club or hear a song on the radio, but unfortunately didn’t have a chance to catch the name of it or ask the DJ, Shazam has provided a wonderful platform for that. All you need is to click on the app and you’ll get the name of the tune in a matter of seconds. If you’re someone who constantly Shazams (like yours truly), then you probably have a long list of tracks you could create a great playlist with. However, Shazam doesn’t create playlists for you, leaving you to that perform that task all by yourself. But why do all the work when there’s an app that can aid you? With PlayZam, all the tracks you Shazamed are synced into one playlist, enabling you to enjoy all the music found on your smartphone and compiling all your musical history into one place. Playzam is powered by YouTube, creating a quality sound experience when backing up your playlist. Just remember which songs you have and check you haven’t Shazamed multiple times, otherwise your playlist will be somewhat repetitive.

Many Israeli startups and apps have found success in recent years, propelling the country to new heights and maintaining its status as a technological innovator. MailWise, Bizzabo and PlayZam are just three names in a large pool of apps trying to break out on the global app charts. While they’re still making their own way, they offer great promise, providing a good set of tools intended to organize people’s lives — and that’s something not all apps can offer, whether Israeli, American or from other parts of the world.

About the Author
Robert is the Founder of Topanda. He is passionate about startups, technology, and music on a vinyl.
Comments