I was ten years old when I first realized that Israel was hated, reviled and under constant threat. I had been reading in my room when I heard my mother sobbing loudly: “That was my shchuna (neighborhood)”, she cried as scud missiles rained down on the city of Holon. I watched my mother cry and something shifted in the tectonic make up of my world view while across the ocean in our tiny sliver of land my future husband slid his gas mask down over his child-face.

Until that moment, Israel had seemed perfectly idyllic. I was raised on stories of the shchunah: how to pick the perfect stones for playing our version of jacks, waiting in line for the one telephone in the refugee camp, how the children of the neighborhood held a referendum to decide what my aunt’s name would be when she was born prematurely and how everyone lived together, speaking broken Hebrew accented with exile and loss. I was spoon fed this dream of a secular socialist Jewish state of heroes and hardworking farmers, of Irgun and Chana Senesh, of sand dunes turned to lush oases. Israel seemed invincible, and then suddenly not.

The first time I came to Israel I was 12. My mother and I stayed at an aunt’s apartment next to Gordon Beach in Tel Aviv, making our way through the country but always coming back to Tel Aviv. We threw obligatory shawls over our bare shoulders at the Kotel and snorkeled in the Red Sea. We went Israeli folk dancing in Eilat and ate copious amounts of ice cream, which my mother’s uncle Yechiel brought home for us daily after his shift as a bus driver.

We stayed in kibbutzes and hostels, catching up with family and old friends. I don’t think it registered that this gorgeous country where the soldiers were hunks and kids my age had total freedom was the same place that was constantly on the brink of annihilation. I never wanted to leave. I could have watched European MTV while eating ice cream in Tel Aviv forever. Even now, having lived here for 12 years, I can still feel the Tel Aviv of 22 years ago. 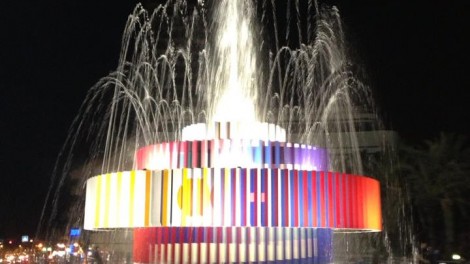 The two other times I was in Israel before the last fateful vacation that became permanent residency were cliché; school and camp organized trips with a lot of hanky panky and very little sentimentality. Israel was where we could get unsupervised piercings in The Pit. Where our group medic was a wizened Russian man with an antique Kalashnikov, but we felt safe because of him. We hiked and shopped and partied and wore necklaces with our Hebrew names written on grains of rice encapsulated in tiny vials. I wore a black and white kefiyeh around my neck, and silver Star of David earrings. I didn’t think very hard about the ‘situation’.

While the First Intifada passed over my self-absorbed bubble of adolescence, the Second knocked me down. From the moment those victorious bloody hands appeared in the window of Ramallah’s police station, I was laid flat by fear and rage and pain. Day after day we waited for news of yet another attack, yet another homicide bombing. On Erev Pesach 2002, 30 people were murdered in Netanya as they sat singing the same songs we sang seven hours after the explosion. A week after I came on that final fateful flight to serve as a volunteer medic, Café Hillel on Emek Refaim was attacked, killing Nava and her father Dr. David Applebaum the night before her wedding. The bus I took to school was blown up repeatedly. The coffee shop a block from my apartment was blown up. The cafeteria in my school was blown up and now a sideways tree grows in remembrance of the 9 murdered students who were just trying to learn Hebrew, just as I would two years later.

Israel was not the idyllic pasture of peace and technologically advanced irrigation I once thought it was.

With every new attack, with every summer war, with every riot and indiscriminate murder, with every two-faced condemnation and ignorant generalization, Israel becomes less and less what I once thought it was.

And I love it more and more.

The hills and valleys, the gentle curves and jutting cliffs, the flowers that bloom for one week a year, the smell of the first rain after a long, dry, hot summer. Where infinite kindness lurks just beneath the hardness of our warrior nation. Where “Be healthy!” is a curse and the language carries the remnants of a thousand forgotten villages. Where sports announcers, criminals, politicians and famous singers speak to God, naturally and publically and shamelessly. Where we laugh at ourselves and each other and where we never, ever stop hoping for peace. Even when we are at war.

Every day for the last twelve years, my love has grown for this twisted, perfect land. For its  complicated, diverse, loving people. We are a Damocles-nation, relishing every moment as the sword over our head sways perilously – we just refrain from ever looking up (unless it is to film a missile interception).

It has been 26 days since our boys were taken. Since they were shot at point blank range while their captors celebrated and a nation stopped breathing. It has been 8 days since their families laid them to rest. It has been one week since a teenage boy was burned alive by angry, misguided Jewish youth who showed us how ugly this conflict has become. It has been two days of this most recent war in a never-ending string of wars.

For twelve years my love has grown for this coarse tumble-weed land, for this barren yellow land, for this lush green land, for this rocky craggy land. With every sustained hit, my heart cries for the shchunah that Israel once was, for the hope that has been dwindling along with the peace movement. I love this land like only a neurotic Jewish mother can. She is my beloved. She may blow hot air at me, swallow me whole with bureaucracy, she may sting me with jellyfish and civil unrest, but she is my beloved. She may be bombarded with strikes from without, with dissent from within, but she is my beloved. As we run to our shelters, as the sirens ring reminding us what our brothers and sisters in the South have been suffering for too many long years, my love of Israel grows stronger, bolder, clearer, less apologetic.

We are no longer a shchunah of war-ravaged refugees tossing coke bottles from repurposed airplanes, we are three generations removed from being homeless. We are three generations removed from having nowhere to turn. The idyllic pastures of plowshares may be long gone, but one truth remains eternal: we are beloved. She is for us and we are for her. 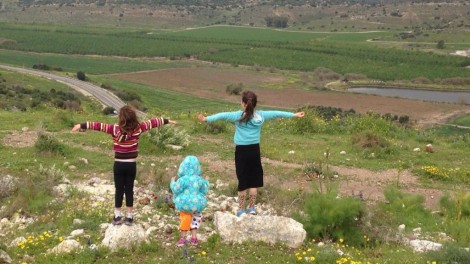 About the Author
Corinne Berzon is currently getting her PhD in bioethics. When she is not reading dense philosophical texts or dancing around the house to dubstep with her three daughters, she teaches yoga, runs in no particular direction and watches inappropriate television with her husband; Corinne loves Israel, but remains deeply and darkly cynical because it is more entertaining than the alternative.
Related Topics
Related Posts
Comments