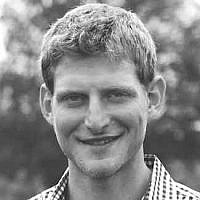 The Blogs
Max Bluestein
Apply for a Blog
Advertisement
Please note that the posts on The Blogs are contributed by third parties. The opinions, facts and any media content in them are presented solely by the authors, and neither The Times of Israel nor its partners assume any responsibility for them. Please contact us in case of abuse. In case of abuse,
Report this post.

Considering the millions of Israeli civilians now under rocket fire, I felt it appropriate to publish a letter I sent home after a Kassam attack I experienced in 2007:

So I lied to all of you.

I went to Sderot for Chanukah. I know I promised I wouldn’t go near it, but an opportunity came  to volunteer rebuilding some of the damage in the constantly barraged city, which I couldn’t refuse.

Eight of us from Beersheba hopped on a minibus and were there in 40 minutes – the short distance was more than disconcerting.

As we were driven to our project, we passed an elementary school lying under a hideous metal structure, a shield arching over it to deflect rockets from the children.

We passed a shell of a house that had been destroyed by a recent direct hit, a grim reminder that there’s no comfort in the fact that most of these rockets land in the desert.

We passed a slew of curious faces along the road, peering from windows and balconies, that expressed a distinct “what the hell are they doing here?” expression. That’s when it really hit me that I was in Sderot, the city that’s on the news everyday.

When we arrived at our site, we saw a newly built sports complex, like any such building I would find find in Atlanta, only with damage from an indirect rocket explosion in the gymnasium. Matt and I repainted the entire downstairs walls with an adorable old lady closely supervising the work who couldn’t stop thanking us.

We then took a brief tour of the city, observing more of the recent damage and debris. At the police station, we were shown hundreds of Kassam shells collected from the streets. The officer dismissed our awe – he said this was “nothing” and pointed out that at certain points in the conflict, more than all of these combined were fired on Sderot on a daily basis.

In the evening, we made our way to the town plaza where a giant menorah was lit to celebrate the fifth night of Chanukah. A crowd of about 100 people, young and old, danced and sang Chanukah songs while munching on holiday doughnuts to commemorate the victory of the Maccabees, a small band of Jewish fighters who liberated Israel from the Ancient Greeks.

Toddlers, elderly, and our troop from Beersheba, all dancing around in circles, kicking up our legs, yelling and singing, happy to be spending another holiday in the Holy Land.

At sundown, the music stopped, the prayer was solemnly recited, and the five massive candles of the beautiful golden menorah were lit.

Israeli flags and three foot torches were all waving high throughout the crowd as we paraded our way through the town, up and down all the avenues, singing and chanting and dancing.

From the back of the parade, I could see the flames bouncing up and down in the dark, illuminating the blue and white flags waving in the night sky as the songs resonated. It was uplifting.

All of a sudden, I was pushed violently from behind.

I turned to see a teenage girl forcing me to a wall, yelling “Kadima, Kadima!” I looked ahead and saw the entire city glowing under red lights. I complied, joining the ranks of half the town’s population in hugging the dirty cement wall of a grocery store.

Within seconds of our scurry – there it was. A loud explosion boomed from the sky.

Shrieks. Cries. And then complete silence.

For about three minutes, it was a cold, eerie stillness – the silence of about 100 people anticipating a rain of indiscriminate destruction. Nobody knew where the kassams hit, how many had landed, or how many were still in the air. As I looked around, I saw little children clenched hand in hand, smothered by their mothers’ bodies. I saw teenage boys crying. I saw a tremendous fear and helplessness that is very difficult for me to communicate. It was a very long three minutes.

Finally, denim pockets across the plaza began to light up and ringtones thoroughly pierced that eerie silence. The red glow dissipated and one by one, people around me cautiously reached for their cell phones. Over and over I began to hear the same Hebrew sentence:

Reports that two kassam rockets hit Sderot had already been broadcast. The crowd, many volunteers from throughout Israel, had to report back to their loved ones that they were still alive.

Then, there was a cry.

The entire town echoed and broke out into song. The candles were relit and the exhilarated people ran back into the street. They hoisted their candles rhythmically, up and down with the tune. The flags were waiving higher and prouder than before. Everyone in the street was screaming the words at the top of their lungs.

These people, these survivors, just faced death in the eye only minutes ago and now they were singing and dancing in jubilation. In this breathtaking show of resilience and sheer defiance, I could almost see the Jewish soul as if it were some sort of tangible object.

The regrouped parade sang its way back to the plaza, where it hushed again. We put our arms tightly over each other’s shoulders and we sang the Israeli national anthem, Hatikvah – the Hope. I have been hearing that song since I was in diapers, but I never understood it until that Chanukah night in Sderot.

As I write this a week later, I close my eyes and I can still see those flags waiving, feel the warmth of those burning candles, and hear those defiant songs rage against the dark night. Hatikva, the hope.

About the Author
Max Bluestein is a Deputy Assistant Secretary at the U.S. Department of Homeland Security.
Related Topics
Related Posts
Comments