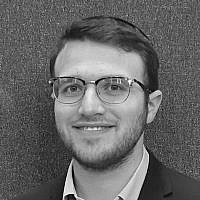 The Blogs
Mikey Lebrett
Apply for a Blog
Advertisement
Please note that the posts on The Blogs are contributed by third parties. The opinions, facts and any media content in them are presented solely by the authors, and neither The Times of Israel nor its partners assume any responsibility for them. Please contact us in case of abuse. In case of abuse,
Report this post.

“Fear comes from uncertainty. When we are absolutely certain…we are almost impervious to fear.” – William Congreve

One of the greatest comforts in life is certainty. There is something incomparably joyous and calming about knowing precisely when the bus will arrive, what’s coming up next on one’s schedule or which friends you will see at which times in which places. For many, the twists and turns of a good mystery novel are painful meanders, a necessary effort in order to arrive at the clever resolution and the smug ‘happily ever after’ nestled in the last few pages.

Whilst studying in a yeshiva in Israel for the past year, I’ve found that there is very little room for uncertainty. Once one works out a solid schedule, it doesn’t change. Days, weeks and months pass by in a blur as you repeat the same activities day in, day out. One’s night-time and wake-up routine follow a similar pattern, you know exactly what to expect, what difficulties you’re gong to face, and how to deal with them. Unfortunately, even the food follows this pattern, one can predict precisely which gourmet delights will be shovelled onto your plate on each day of the week.

Sometimes, something happens which disrupts this satisfying orderliness.

In suburban England, the lives of the middle-class, two and a half children families often follow a similar pattern of certainty. That is until the vagrant students from the local college move in next door. At this point, the tried and tested, sofa filled, Sunday roast laden, sleepy, middle-class weekend goes out the window. Drug fuelled midnight parties with pounding bass, shrieking twenty-somethings and glass bottles flung over the fence into the petunias become the order of the day, and the certainty of a ‘nice quiet weekend’ the neighbours hold dear evaporates.

When Hamas fires a rocket from Gaza into Israel, the news usually declares confidently ‘It caused no injury or damage’.
The reality is somewhat different. From even before the first mournful wail of the siren, the certainties which shape the foundations of our lives disappear. One is no longer certain that they can go for a walk safely. Nor can one be sure that they can put their head down on the pillow at night and enjoy uninterrupted sleep. One isn’t sure if they can eat at the same leisurely pace as they used to, or even if they can have a shower without needing to dash out to the shelter.
These things happen even before the first rocket hits.

And then the siren lets out its scream.

Your brain immediately goes into overdrive. Distance, speed and time equations pop into the heads of even the most mathematically inept of us. Calculations of which is the best shelter to run to within 45 seconds whizz around our brains, trying to take all the variables into account. Is it better to risk tripping over uneven ground to get to the closer shelter, or should I run further? Should I turn back, or keep going forward? Should I head for the purpose built shelter alone, or join everyone else in the reinforced (but not rocket proof) main study hall? Should I move away from the south wall, or stay where I am? There are no certainties, only lucky guesses.

The siren fades away, you count to five, and wait for the bone clattering BOOM as the missile is engaged by iron dome, or hits the ground. You stay put a little longer as more explosions sound as the rest of the rockets end their journeys of destruction.

And then the wait continues.

There is no way of knowing if or when the next siren will sound. There are no rules or patterns, all it takes is for one fellow on the other side of the border to randomly point his launcher in this direction. And so, we continue living in our cloud of uncertainty, our minds constantly on alert, waiting.

But, there is one uncertainty I couldn’t be more thankful for. When these attacks happened in previous years, everyone knew with absolute certainty, thanks to Sir Isaac Newton, that every single missile which was fired into the air above Israel, had to fall somewhere. Now, we watch as Iron Dome’s counter missiles dance with almost poetic grace through the air, its white tail streaming behind it like a ribbon, miraculously meeting the rocket high in the sky, seemingly pausing for a second for one final salute, before detonating, destroying itself and the ugly threat it’s accompanying in a magical little puff of smoke, and an almighty boom.
At that point, we all know with 100% certainty, that there is one less piece of supersonic, explosive metal hurtling through the air to an Israeli city.

And so, just like stricken middle-class families the world over, there is nothing we can do except throw the beer bottles back over the fence, complain pointlessly to the council, and pray every day that our noisy neighbours will move elsewhere, and find someone else to annoy.