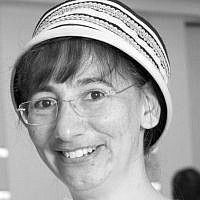 The Blogs
Chana Rosenfelder
Apply for a Blog
Advertisement
Please note that the posts on The Blogs are contributed by third parties. The opinions, facts and any media content in them are presented solely by the authors, and neither The Times of Israel nor its partners assume any responsibility for them. Please contact us in case of abuse. In case of abuse,
Report this post.

Before I suggest what Israel needs to do to win world opinion, I want to propose a few questions for journalists to ask the democratically-elected Hamas leaders with whom they speak.  In fact, I would even ask that of Fat’h “opposition” parliament members.

– What percentage of your annual budget goes into preparing to attack civilian targets in Israel?

– How would you break that budget down, in terms of missiles?  Training?  Tunnel digging equipment?  Salaries and stipends for convicted terrorists and their families? Children’s training exercises?

– And how much of that money goes into civilian defense?   How much has your democratically-elected government spent, in preparing for war, to prepare for the possibility that your enemy might strike back?  How many bunkers, shelters, hospitals did you build?  Are your children’s schools equipped with Safe Rooms?

Heck, even the Nazis set up air raid sirens to protect their civilians.

Now, on to what Israel, specifically the IDF spokesperson, should be sharing in order to win world opinion.

Side note: The saying ,”The world loves dead Jews,” was very popular when I was a young girl, granddaughter of two “sole survivors,” living in the same Canada that  during the Holocaust set its Jewish refugee quota at “None is too many.”   The constant complaints that more Gazans than Jews are dying in this battle reminds me of that line.

I must state, though, that today, I am extremely grateful to the current Canadian government’s outspoken support for Israel’s right to defend her citizens.   Thank you, PM Stephen Harper and FM John Baird, as well as CTV, the Canadian Sun syndicate, the National Post, etc, for your intellectual honesty.

Now, what we must do to counter world criticism of disproportionately few Israelis being killed in this war:

In lieu of the feel-good headlines, “Family Saved by their Safe Room,” we must headline the fact that a family of 5 were almost killed, saved only by their quick thinking under stress.

The factory in Sderot that was set alight by a missile two weeks ago must be reported at 130 workers would have been burnt alive at work, but for the Israeli Sabbath laws.

6 preschoolers were nearly massacred in their sleep by a hamas missile that landed inside their day-carer’s home, but for Gd’s kindness as reflected in the missile’s explosives failing to combust.

We can but guess how many innocent israeli civilians we would be burying  but for the billions that Israel has been forced to divert into developing and employing the Iron Dome missile-interception system.

And so on. Were the IDF to publish the numbers of Israeli deaths that Hamas has been AIMING to achieve, with the small reminder that, unlike our suicidal enemies, our defense budget goes towards DEFENSE, perhaps the world will be satisfied. Or perhaps not, because to quote a famous supporter of Israel, “We’re not dead yet.”

But honestly, I don’t care how upset CNN, B’tselem, Obama or SkyNews are with us.  My prayer is: May our enemies continue to be frustrated by our existence.

About the Author
Chana made Aliya at age 17 as part of her goal to live Torah in the details. When not writing obsessively, she is a full-time wife and mother, with side helpings of remedial math teaching and case management for special-needs kids. Currently studying psychology and education at Open University and desperately seeking cleaning help.
Comments