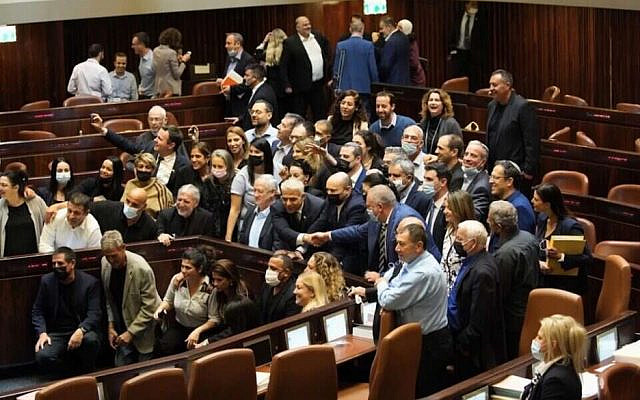 The eulogies are starting to roll in, with an assortment of analyses of what went wrong in Israel’s 24th Knesset. The coalition that brought together disparate ideologies and personalities was an act of profound creativity and trust. Against all odds, The Government of Change ruled for a year. The progress attained has been impressive in every sphere: social, economic, security and even environmental.

As a professor of public policy with a specialty in “program evaluation” who was fortunate to be part of this grand political experiment, I have my own diagnosis. Here are four insights I have gleaned looking back on the past year. If we learn these lessons, I believe we can do an even better job when the dust settles after the fall elections.

Lesson 1: Party leaders need to do due diligence.

In retrospect, Naftali Bennett proved to be a far better manager of the country than he was of his own party. Notwithstanding his Yemina party’s disproportionately modest, seven-person Knesset faction, three of its Knesset members proved disloyal to their party’s chair and were ultimately unwilling to accept the party line.

Add to that Meretz party chair Nitsan Horowitz’s acute negligence in picking unaffiliated Raida Ranawai Zoabi as a wild card token Arab woman on the Meretz list (passing over countless, loyal party activists — Jewish and Arab), without minimal due diligence. Together you have the makings of the perfect storm that toppled our government.

Benny Gantz faced similar disloyalty, opportunism and lack of discipline from Blue and White Knesset members in his first round as defense minister. He internalized the lesson and put together a diverse team of talented leaders. We all harbor our own passions and visions, but we also understood the rules of the game: in a government coalition, every day you make concessions for a greater good. Hopefully, other Israeli party leaders will do a better job vetting future Knesset members to ensure loyalty, a modicum of selflessness and discipline. Otherwise, a government representing all segments of society cannot endure.

Lesson 2: Never forget that coalitions break down in the Knesset – not in the Cabinet

Any empirical evaluation of Israel’s long history of coalition collapses suggests that the cabinet ministers usually find ways to get along. They have ample motivation to keep their government afloat. Rather, it is disgruntled parliamentarians who emerge as weak links that can be cajoled, bullied and enticed into crossing sides. With an opposition as relentless and belligerent as this one, it was critical to maintain coalition parliamentary morale, providing Knesset members with enough achievements and sense of satisfaction to withstand the onslaught.

Especially when there is such a thin government majority, there must be far more proactive efforts by ministers to reach out to Knesset members, hear their complaints and think about how the executive branch can help its MKs produce a steady stream of accomplishments – big and small.

Just prior to the voting on the national budget, the coalition sponsored a “pep rally” for its Knesset members and spouses in Modi’in where we enjoyed a light Friday lunch and a hilarious standup show by Israel’s leading comedian. It actually worked: it reminded us how much we actually had come to like each other and how proud we were to be changing history. It gave us the resolve to fight through three days of late-night voting and deliver the budget on time.

Unfortunately, once the budget passed, ministers became distracted and self-absorbed with their own agendas. They forgot that they ultimately need Knesset members to move the government’s many initiatives forward. For me, it was extremely frustrating to have a litany of environmental bills thwarted by the environmental minister on petty, trivial grounds. She should have been fully committed to supporting environmental proposals from legislators. For other disgruntled MKs, such ministerial neglect proved to be too much. In the future, it would be well to build into the cabinet’s operational norms routine maintenance in the form of moral and legislative support.

One of the opposition’s most annoying critiques was their lambasting the so-called Norwegian law, which grants Knesset members who resign to become minister the right to return to parliament if they change their mind. The relatively new law (actually passed when Netanyahu was Prime Minister) allowed more than a dozen competent and enthusiastic aspiring politicians to step in and replace their party’s ministers. The outcome proved to be excellent.

Most of my fellow “Norwegian” parliamentarians are good people who never actually believed they would become full-time, paid politicians. All entered the Knesset with impressive professional careers, experience and integrity. It was these very traits that made them attractive additions to the party list in the first place. So, when the “Norwegians” took the oath at the Knesset, we were thrilled and appreciative of the privilege and hit the ground running.

It was invariably the Norwegian parliamentarians who sat through long oversight hearings, demanding answers from bureaucrats. We wrote the proposed laws, created the lobbies and tried to work across the aisle. We also created a collegial culture in the coalition, disproving the cynical claim that in politics there are no friendships, only common interests.

All my life I thought I saw myself as an American-Israeli. But the new Scandinavian identity enabled a life-long environmental academic and activist to bring his experience to dozens of hearings, debates and public initiatives. There were plenty of other impressive Norwegian MKs who worked tirelessly in areas like sports, education, animal rights and health care. Critically, our presence allowed the government ministers we replaced to focus on serving the public and their work in the executive branch without the constant headache of spending 20 hours a week in the parliament. When Israel was established there were only 5,000 citizens for every Knesset member. Today there are about 80,000. They deserve legislators fully dedicated to their critical work. In short, the Norwegian law ensures that legislators provide the checks and balance Israeli democracy so desperately requires. We should keep it.

Lesson 4: The unfortunate victory of tribalism

President Rivlin often spoke of Israel’s four tribes. The truth is that our multi-cultural social mosaic is comprised of many more. The government of change was an attempt to bring parties together from across the full range of Israel’s political spectrum, to work for the common good. For the first time in 73 years, an Arab party was an active member of a government coalition. I believe that this will constitute a turning point in Israel’s troubled relationship with its minorities.

But for such diversity to work, everyone needed to converge to the center and accept moderate positions that don’t push anyone else too far out of their comfort zone. Looking back — it didn’t work. The coalition’s frequent crises were the result of extreme fringes, routinely making demands in contravention of the coalition agreement. Ultimately, politicians from the extremes were allowed to control the agenda.

Some people speak dismissively of centrist parties, which they deem uninspiring. But that is an insidious mischaracterization of the essence of centrist political movements. Centrist parties are every bit as passionate about their beliefs as those on their right or left. They are what Professor Gil Troy calls “the muscular middle”. The difference is that centrists refuse to accept an ideological Orthodoxy, preferring to judge every issue on the merits.

The Blue and White party constitutes the quintessential centrist party in Israel. But it was actually the fiercest defender in this Knesset of the rights of Israel’s poor and disempowered. I believe the same can be said about our work on behalf of the environment. At the same time, the party was surely the most conscientious about strengthening Israel’s military capacity. This combination of issues and the vigor with which we pursue them defy the centrist stereotype.

To hold together a multicultural, ideologically diverse coalition, centrist parties need to set the tone. Israel’s 24th Knesset proves that if the extreme fringes of Israeli society or their self-righteous elected representatives start to hold the majority consensus hostage, conflict and collapse are inevitable.

If present polls are precise, there will be another opportunity to form a broad-based coalition, where diverse parties agree to put certain hot-button issues aside to get things done and create a better country for all. The coming election, like them all, is critical. With the right leadership, we can learn from our mistakes and form a government that will continue the many changes so needed to better serve Israel’s citizens.