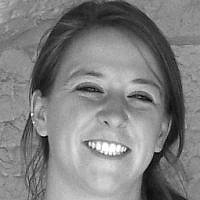 The Blogs
Samantha Ben Avraham
Apply for a Blog
Advertisement
Please note that the posts on The Blogs are contributed by third parties. The opinions, facts and any media content in them are presented solely by the authors, and neither The Times of Israel nor its partners assume any responsibility for them. Please contact us in case of abuse. In case of abuse,
Report this post.

This summer I spent a month in Europe with a group of American Jewish teens. We travelled across Italy and Slovenia. We took gondolas through Venice, saw the Statue of David, explored the remains of Rome in its height, and went white water rafting in Slovenia. We explored the long history of Jews in Italy, discussed what it meant to be Jewish in today’s world, and were hosted by local communities during Shabbat.

We then flew to London and traveled through London and Stonehenge. We took an overnight ferry to France, saw Normandy and Paris before driving to Brugge, Belgium. After exploring the quaint, little city, we continued to Amsterdam. There we saw the city and all of her colors while spending one last Shabbat together. The teenagers ranged from fourteen to eighteen, and came from all over the United States.

Now here’s your question: Sam, you’re a tour guide in Israel. You have a website, a Facebook Page, and work here in Israel. You worked hard for two years, passed the test to work in Israel, and you go to Europe to work as a counselor with a bunch of teenagers for a fraction of the salary. Why? WHY?

I’ll tell you why. It was more than just a chance to see places I’ve never seen before and learn things I didn’t before from the tour guide. I learned so much more from the teens themselves. Yes, I learned about the building of the Eiffel Tower, I learned the significance of the Statue of David and the Mona Lisa. But I learned from the teens. They taught me things about myself, about life, about things I didn’t think I’d learn from people thirteen years younger than me.

One of the other staff members was an author. Throughout the month we would joke, and give him titles for the chapters of his next book- all from what the participants said. It was a joke, something light to make us laugh throughout the day. But here is my outline for the book: What I Learned From My Participants in Europe…. Seriously.

#1: Know what battle you want to fight (a.k.a. Know when to let things go)

There are rules to every program, every trip, every youth group. There are also things that we, as staff, expect from the participants- attentiveness, timeliness, courtesy. Sometimes the participants don’t follow the rules given by organization. Many times they don’t come on time. Now, I’m not about to say that these rules aren’t important. They are VERY important. The rules are what ensure the safety and security of the participants. But it is also important when to be strict about what. If two kids are two and half minutes late one time throughout the entire trip, am I going to punish them? If two of the kids are having a disagreement, am I going to get involved? But if 5 participants are ten minutes late, that might be something I deal with.

When you’re working with a group, you’re on 24/7. You can’t let every individual thing be punished. But you also have to make boundaries and rules very clear. And there is a way to not push every rule and still have it be followed. Show that the rules matter, but show that you understand that the participants are people and you are not going to micromanage everything they do.

What I learned specifically from these teens in terms of “knowing when to let things go” is to watch and enjoy the teens learn from the rules, learn from pushing the boundaries, and growing from it. I learned to stay calm, even when holding them accountable–to let things go peacefully to fight the battle calmly.

#2 But also know when to stand your ground

Here’s the thing though. You can’t just stay calm, and let the participants break the rules, make a mess, and then walk all over you. So let’s take an example: If I tell the group from the first day being on time is very important, what happens if the participants are late every day after free time for a week? If I don’t say anything, the participants think it’s ok, they continue coming to meeting points late, we miss out on amazing opportunities, and in the end they can easily come to the conclusion that none of the rules I set are relevant. Good-bye order. Good-bye respect.

But what else happens sometimes? Sometimes when you are calm and understanding and go- with- the- flow until the one time you have to stand your ground. And the participants are shocked! “What happened to the nice Sam? Why is Sam being so mean? Why is this a big deal?” You need to stick to some of the rules and ideas you set, and believe.

So, what did I learn over the past month in terms of standing my ground? Once, whenever a participant, a group member, anyone would complain that I had been mean, that a rule wasn’t fair, I would immediately become nervous I had done something wrong, something bad. “Was it the wrong thing to do? Am I a bad person? What if they’re really mad at me? What if it wasn’t a good idea to put the rule into place?” I would call my fiance in a panic asking him how badly he thought I messed up. His answer? “You’re so professional, and you’re such a good person, that even if you did something less good, it’s ok. You’re bad is everyone else’s good.”

What I learned with these kids that standing my ground doesn’t only mean no “take backs,” even if it’s bad. It means really believing that the rule I had set is good. When I hold a participant responsible after breaking the rule, I’m not doing something wrong. I can stand my ground with a clean conscious.

#3: Care about everything and nothing at the same time

Teenagers have this amazing talent, and I have no idea how they do it. They somehow manage to care about things as intensely as they don’t care about the same thing in the same breath. They would turn to me every five minutes all day long to ask me when free time or time for shopping is. It was be the most important part of the day. They couldn’t ask me more times when free time is and if they could have more time to go shopping. Then it was finally time for free time. I would tell them how much time they had and when to be back at the meeting point. But rather than go running off the minute I finished talking to enjoy as much of the free time as possible, they would simply stand there and look at me. My solution to this oddity? I had to tell to “Go change the world” before they would start out on their free time.

The same thing happens with teenagers when they get frustrated about things. It is the biggest deal in the world. Nothing be worse. But then when you turn around to check in on how they’re doing the place they’re in has already become the best place in the world and nothing could be better.

I think it is an amazing thing these teenagers do, and I wish one day I will understand it.

#4: Get to know the world… And let it change you

When I really think about how I spent my summer, it is amazing that a group, some as young as 14, took the opportunity to travel the world and experience how others live their lives and view the world. They had the insight to take a trip and not only learn about Judaism in different countries, but about those countries in general. For many of them, it was their first time away from home. It’s an amazing opportunity, and I am so proud to have been the counselor of teens who took up that opportunity. I hope that my participants allowed this amazing opportunity to change them, to open their eyes, and shape who they are and who they will be.

I learned how truly important it is to take the opportunities that present themselves in life. When I see an opportunity arise it is a wonderful privilege and blessing. What a waste it would be if I didn’t take it. And it was maybe a lesson I knew before. But this was a trip that really drove it home for me–reinforced it.

#5: Dare to challenge who you are.

Throughout our month together , there were many times I, or one of the other staff members challenged the participants. One of my favorite activities to do at the end of the trip was to have them think about the “rose, thorn, and stem” of the week. The rose was the high point of the week, the thorn was the low point of the week, and the stem was something that caused them to grow. Sometimes, the places or sites challenged the participants. Walking up to the second level of the Eiffel Tower was physically challenging. Visiting Fort Breendonk, a transit point for Belgian Jews during the Holocaust, challenged them emotionally.

But they took it all in stride. They embraced the challenge, they were thoughtful. They taught me that challenging myself and who I am isn’t bad. It can be scary, uncomfortable maybe, but it isn’t bad. And daring to challenge who I am turns it into an exciting adventure. I may turn out different, I may stay the same, but let’s give it a shot and see where life takes me.

I won’t forget what my participants taught me nor will I forget (for future trips) that they can. I guess the best thing I learned on my month in Europe is:I left Israel at the end of June, thinking I was about to staff just any other trip. I was expecting to learn some things about European history and see some new and beautiful sight. I was hoping to have some fun while doing it. I wasn’t planning on learning so much from the participants I was taking throughout Europe. And I surely wasn’t planning on learning things of so much value.

“Let your participants surprise you.”

About the Author
Samantha was born and raised in Rochester, New York. After earning her B.A. in Judaic Studies and Political Science, she made aliyah in September 2011. Shortly after moving to Israel, Samantha enrolled in the Tour Guiding Course in Jerusalem, and passed the certification exams in 2014. She has been guiding, and sharing her love for Israel ever since!
Related Topics
Related Posts
Comments