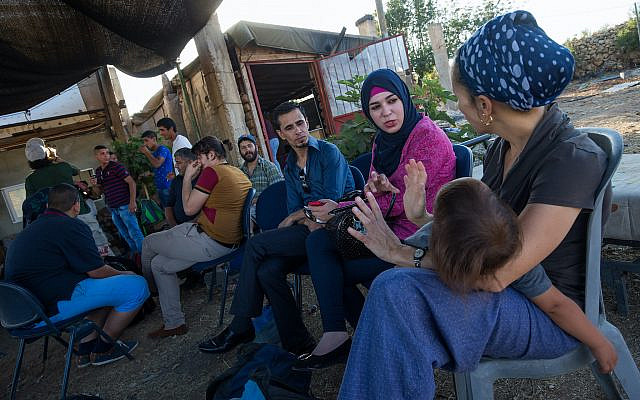 The current Israeli government is ostensibly determined to change patterns inherited from its predecessor both domestically and internationally. On the diplomatic front, much has been made of efforts to mend fences with traditional allies (from Jordan to individual countries in Europe and elsewhere), to strengthen the strategic alliance with the United States, to nurture the bourgeoning ties with the Gulf states and North Africa, and to cultivate links with multinational organizations and agglomerations, including the European Union and the African Union. Under the leadership of Foreign Minister Yair Lapid, a shift in approach to external relations is evident.

It is now clear, however, that this tactical change has hardly made a dent in the already yawning gap between international attitudes towards Israel and its actions on the ground. To the contrary: each house demolition, evacuation, violent clash, loss of life, humiliation, and palpable threat highlights the growing chasm between ongoing Israel policies and informal as well as formal reactions at home and throughout the world. The change in style has not been accompanied by a parallel shift in substance.

To be sure, Israeli policymakers may now be more attuned to criticism from abroad and more sensitive to the potential repercussions of their activities externally and locally than in recent years. They have not, however, shown any serious signs of consequently adjusting their strategies. And without that, Israel cannot expect to either avert growing global criticism or to correct the deeper problem of the ongoing dissonance between its own conduct and its core values of liberty, justice and equality enshrined in its foundational vision.

To achieve such an alignment, it is no longer good enough to profess a desire for change; it is necessary to identify, address and alter its content. This task is actively being carried out by multiple organizations and individuals within Israel and by many Jews abroad. Their commitment to a value-driven Israel has sheltered the country from complete international ostracism in recent years. But it cannot continue to do so if official Israel continues to avert coming to terms with the political, legal, human and moral consequences of the ongoing occupation of Palestinian territories and lives.

In its first two months in office, the Bennett-Lapid government has signaled that it is attuned to the changing currents on Israeli-Palestinian matters, especially in the democratic world. Yet the tactics it has adopted hardly address its content. Five main tools are evident, all leading to one bottom line: an effort to delay a real change in policy.

The first, and most common, tactic is to deflect attention either by pointing to other urgent threats (Iran, Lebanon, Gaza), to topics of mutual concern (climate change, combatting the new surge of COVID-19 and its variants, ensuring LGBTQ rights, promoting advanced technologies) or to new relationships (such as within the UN system and with regional bodies). However refreshing these efforts, they are not a substitute for dealing with the Palestinian question.

The second, related, approach is to divert the blame for Israeli actions in the West Bank, East Jerusalem, and Gaza to Israel’s key detractors. Iran, the Hezbollah, Hamas and Jihadist groups once again star. But however nefarious the activities of these actors — many of whom present themselves as the champions of Palestinian rights — such diversionary tactics sidestep the main issue.

A third, less benign, approach to external and domestic reservations on Israel’s handling of Palestinian matters is to discredit the messengers — mostly Israeli and international human rights organizations, but also foreign leaders, the press, leftist political parties and, especially, Palestinian citizens of Israel. Very much a continuation of the line employed during the Netanyahu era, this method has become increasingly ineffective. It confuses the messenger with the message and ignores the growing number of voices unwilling to countenance egregious Israeli violations in the areas captured in 1967.

A fourth tactic is to distort the critique. This has been the case for years regarding demolitions (most recently in Al-Walajeh, Ras Al-Tin and Humsa al-Baqia’a), settlement construction, evictions (such as in Sheikh Jarrah, Batan al-Hilwa and Al-Bustan in Jerusalem), undue use of force (including recent killings of innocent bystanders), and administrative detentions. Official protests and rising criticism have been dubbed as anything from pro-BDS and anti-Israel to, in extreme cases, antisemitic or even terrorist. The reactions to the decision of Ben and Jerry’s not to market their ice cream in the settlements is a vivid reminder not only of how dissent can be transformed into something it isn’t, but also how the most essential questions of antisemitism and racism may ultimately be degraded.

Finally, at times official Israeli spokespeople do attempt to deny certain actions (such as the use of force to quell protests on the Temple Mount/ Haram al-Sharif). These cover-ups are scarcer lately since they are easily refutable and undermine Israeli credibility. Put together, these tactics have in common a propensity for deferral of the issue at hand, strongly influenced by the predominance of security concerns and by ongoing splits within Israel on the advisability, reasons and feasibility of continued Israeli overrule over the area between the Mediterranean Sea and the Jordan River.

Internal divisions have made it amply clear that there is no consensus either in the country or within the present government on Israel’s relationship with the Palestinians both beyond and within the Green Line. That in itself is a marked deviation from the insular, hegemonic-Jewish mindset that held sway during the last decade and more. It also explains the pushback evident within the country on Israeli violations of Palestinian rights as an increasing number of citizens are both unhappy with the status quo and uncertain about future directions. Hence, the expansion of Israeli-Palestinian joint action around sensitive flashpoints (especially in Jerusalem and its environs) to counter an increase in venomous digital traffic.

Jews abroad, uneasy about the growing discrepancy between their predominantly liberal values and their association with Israel, have opted to highlight their normative commitments, which they view as an integral part of their Jewish identity. The latest poll conducted by the Jewish Electoral Institute last month underlines the rising disaffection with things Israeli, especially among younger and highly educated American Jews. A recent University of Maryland Critical Issues Poll published by Brookings on July 29, 2021, confirms the more general shift from overwhelming support for Israel to a more reserved stance in the wake of recent events.

These positions are now being expressed not only by progressive Jewish groups, but also by a growing number of mainstream organizations, exacerbating the already palpable divide between many segments of world Jewry and Israel. Like the internal rift, no amount of hasbara or appeal to religious or cultural identity can erase this gap.

What can promote this process would be a willingness to discard tactical measures of yesteryear in favor of an admittedly painful but absolutely vital process of a renewed quest to reclaim and implement fundamental human values. These are not only universal edicts, but also very much Jewish ones. As many Israeli and Jews elsewhere are coming to understand — along with a growing number of Palestinians and their supporters — a value-based approach to the Palestinian-Israeli conundrum can lay the groundwork for a lasting political accommodation (as a Carnegie Endowment for International Peace brief outlined in a major publication in February of this year).

It is difficult to shed years of enmity and to question deeply embedded narratives. It is even harder, as recent experience demonstrates, to live either in a bubble of one own’s making or in a state of interminable dissonance between daily realities and the principles one holds dear. Confronting this gap is the first, critical, step towards creating a different Israeli-Palestinian relationship and, on that basis, devising ways to share the land while respecting the individual and collective rights of all its inhabitants.