Fifty Years Too Many, Two States – One Hope. These were the mottos of the anti-occupation rally, which took place in Rabin Square in the heart of Tel Aviv past Saturday (May 27th). The event, which marked 50 years of occupation, was organized by the Peace Now movement and Meretz political party, along with other left wing bodies. According to the different sources, it was attended by 20 – 30 thousand Israelis, with some supporters coming from as far as Western Galilee kibbutzim. Balkan Beat Box, Achinoam Nini, Los Caparos and Alma Zohar performed between the speeches.

Here you can find the detailed account of the demo prepared by the TOI staff.

While bellow are visual musings of a concerned gawker, which hopefully capture the invigorating spirit of the rally. 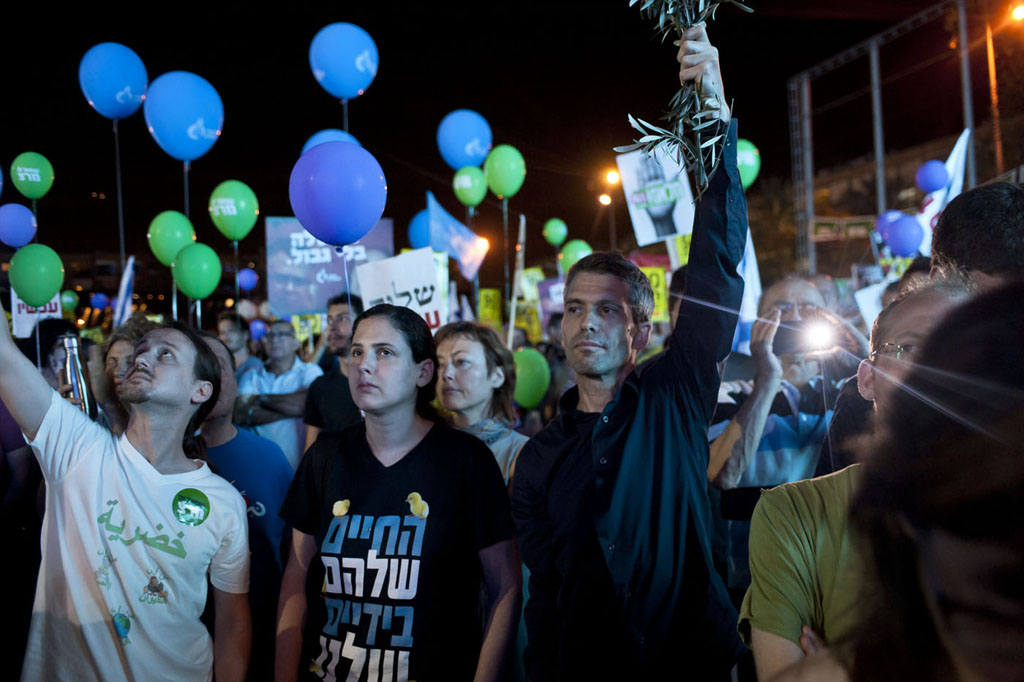 On the whole, speakers lambasted the right wing leadership in general and PM Bibi Netanyahu in particular, called to join forces in order to put an end to the ugly phenomenon named occupation. The spirits were high, as it often happens at left wing events. We can only hope that it works and in fifty years from now out great grand children won’t meet here under similar circumstances. 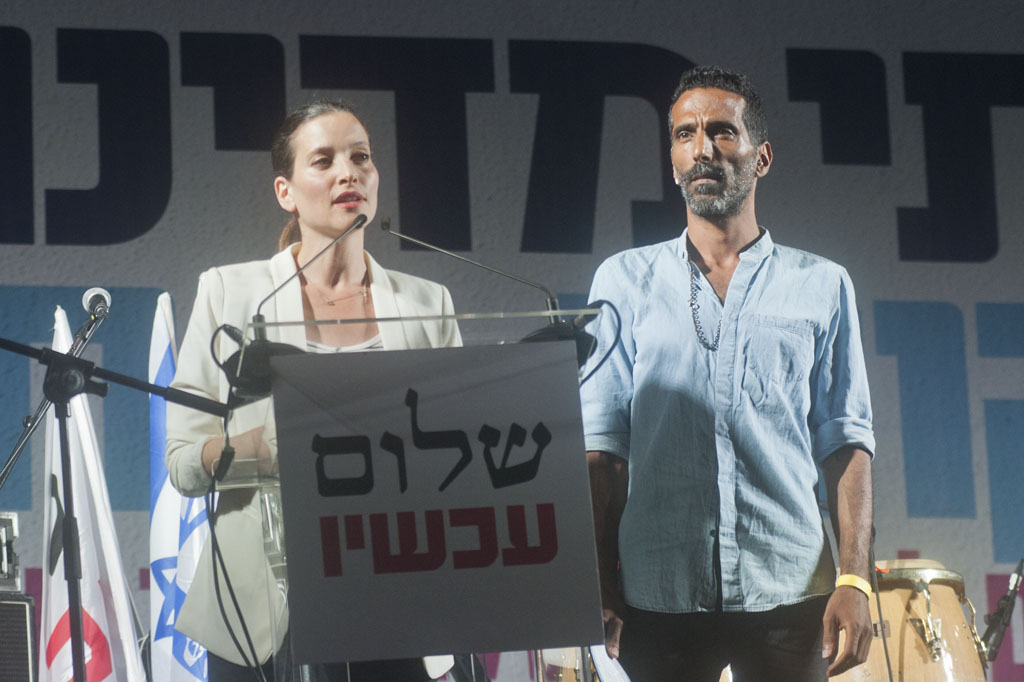 The hosts – actors Renana Raz and Yossi Zabari were just spectacular. Actually, with such stage presence you even don’t need to speak. But they spoke, and spoke powerfully, giving the right tune and tempo to the entire event. 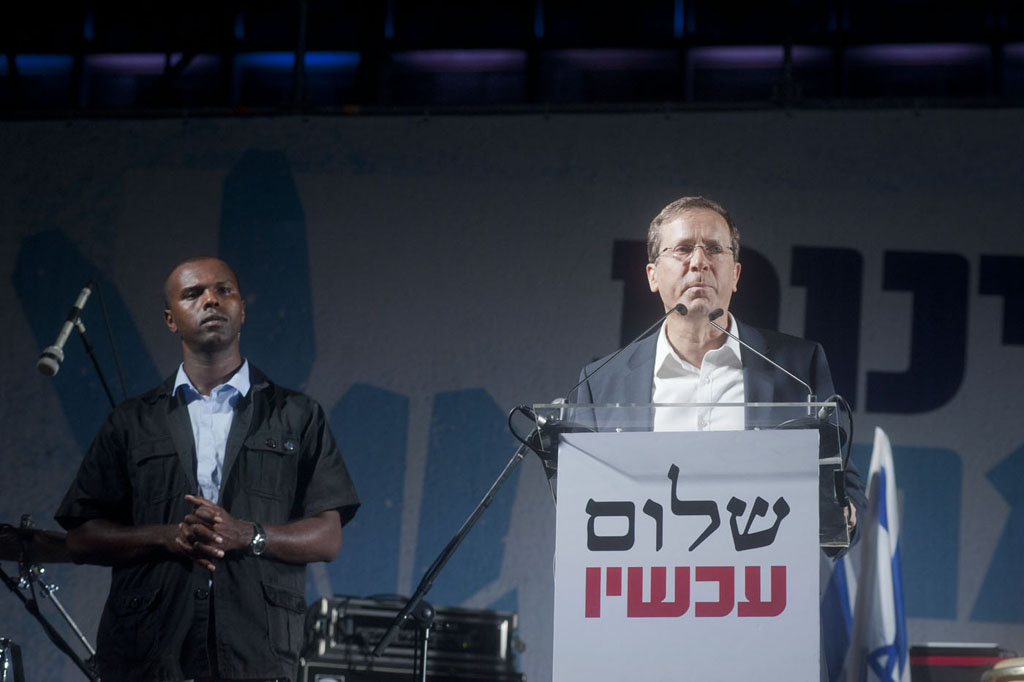 Regretfully, the opposition leader Isaac Herzog with his usual coulda-woulda-shoulda way of presenting his ideas was less than impressive. His suggestion of joining forces with center-right Kulanu and centrist Yesh Atid parties in order to form one big political bloc that could replace the current government was booed. Comments “Who needs this spineless right winger of Lapid” were heard around. Everything he said was correct, but the essential drive was missing. 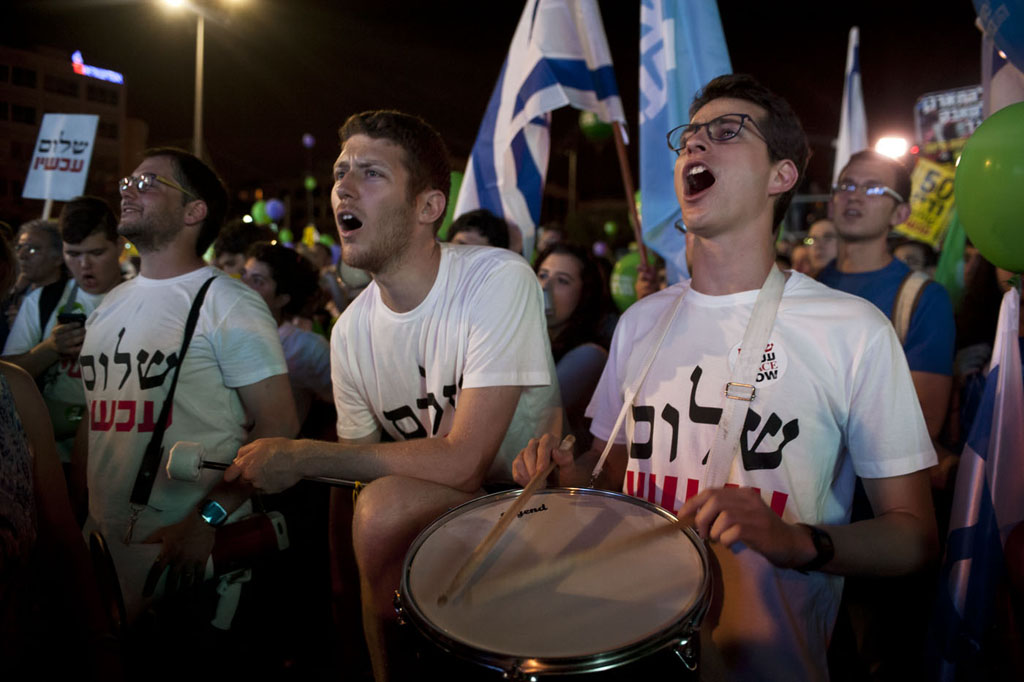 These were Meretz leader Zehava Galon and Peace Now Director-General Avi Buskila who called a spade a spade. Ultimately hated by the conservative masses, they know they have nothing to lose and speak point-blank. I just quote their honest and powerful words from the TOI report. 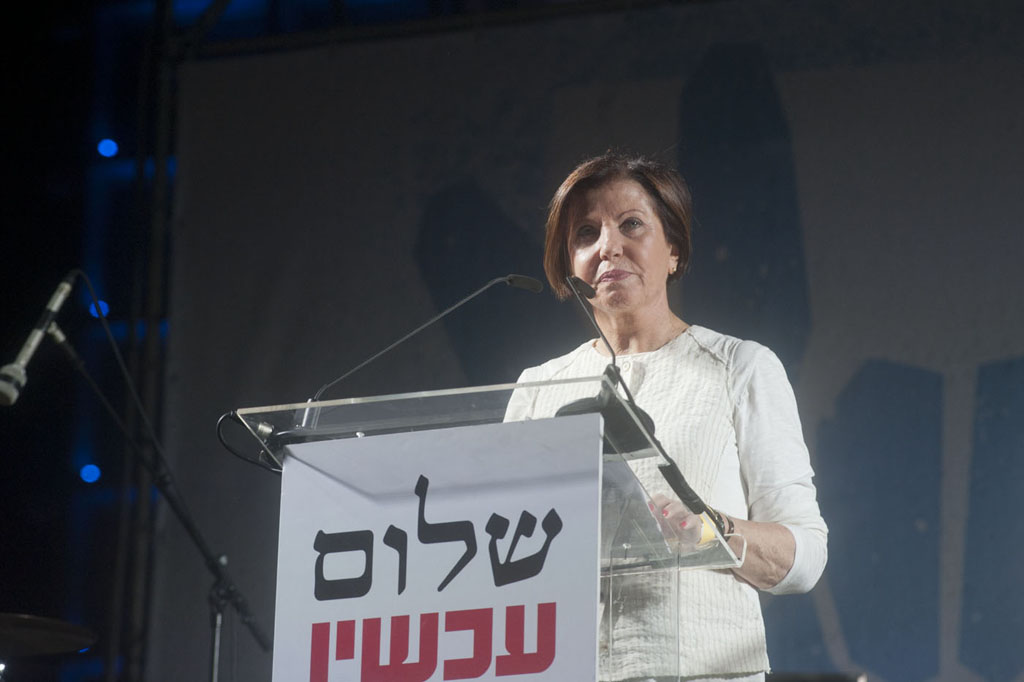 Zehava Galon: “Netanyahu is lying when tells us, for a decade now, that he can manage the conflict. That ‘there is no other choice’ and ‘no partner.’ He plays the victim, shows no courage or diplomatic initiative and flees from responsibility and risk-taking. This lie must be eliminated — because it is only meant for his political survival… Despite Netanyahu’s lies, the Israeli public supports compromise, ending the occupation and says yes to two states for two peoples.” 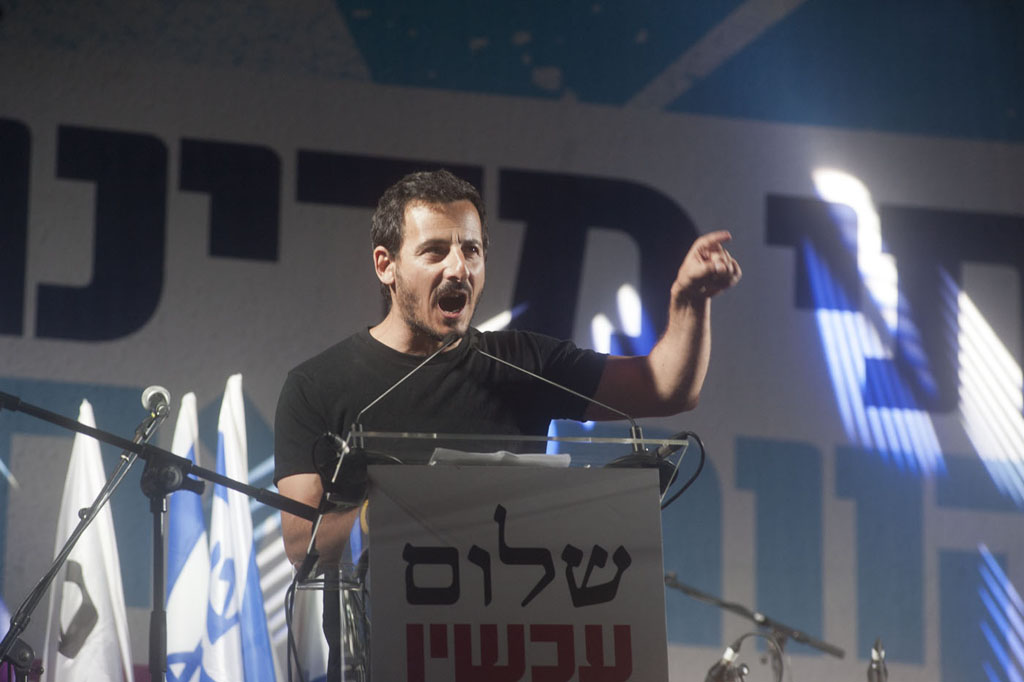 Avi Buskila: “50 years of pro-settlement policies were endangering our future and burying the Zionist dream while undermining Israeli democracy… For years we have allowed a hollow, irresponsible and out-of-control leadership to push us into the abyss. Today we are putting an end to it… today we, the citizens of democratic Israel, rise from the trenches to defend our home… This is the time to illustrate to Israelis, to the Palestinians and to the world that a large portion of the Israeli public opposes the occupation and seeks to arrive at a two-state solution. Yes to hope, yes to two states, no to occupation, no to annexation, and yes to a better future for both Israelis and Palestinians.” 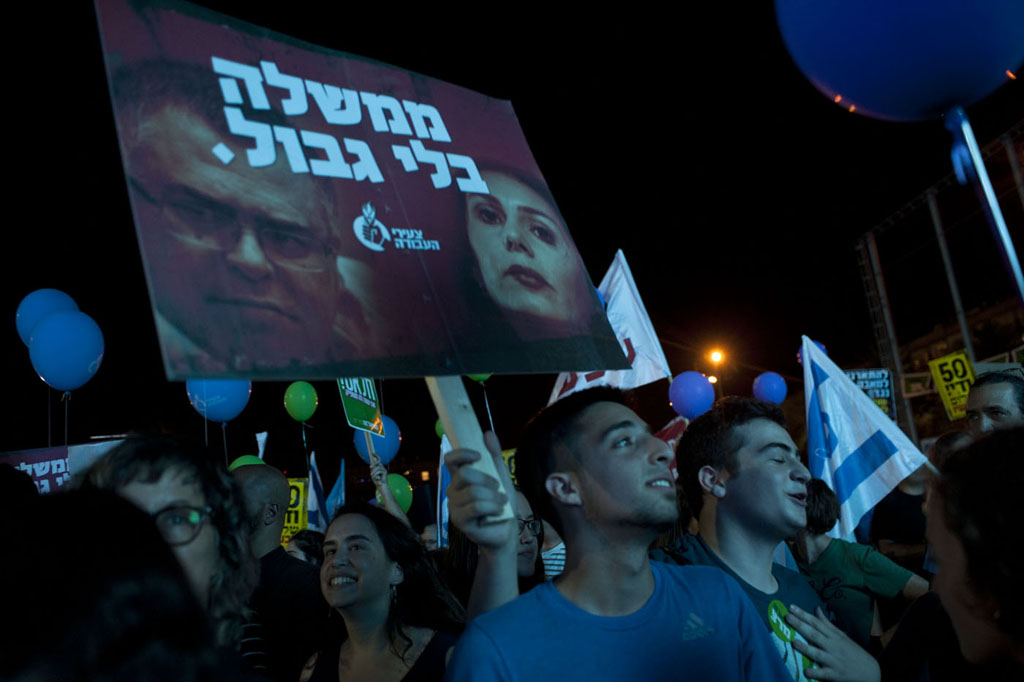 There is a sucker born every minute. Not in Israel. You can’t dupe these kids, can you? 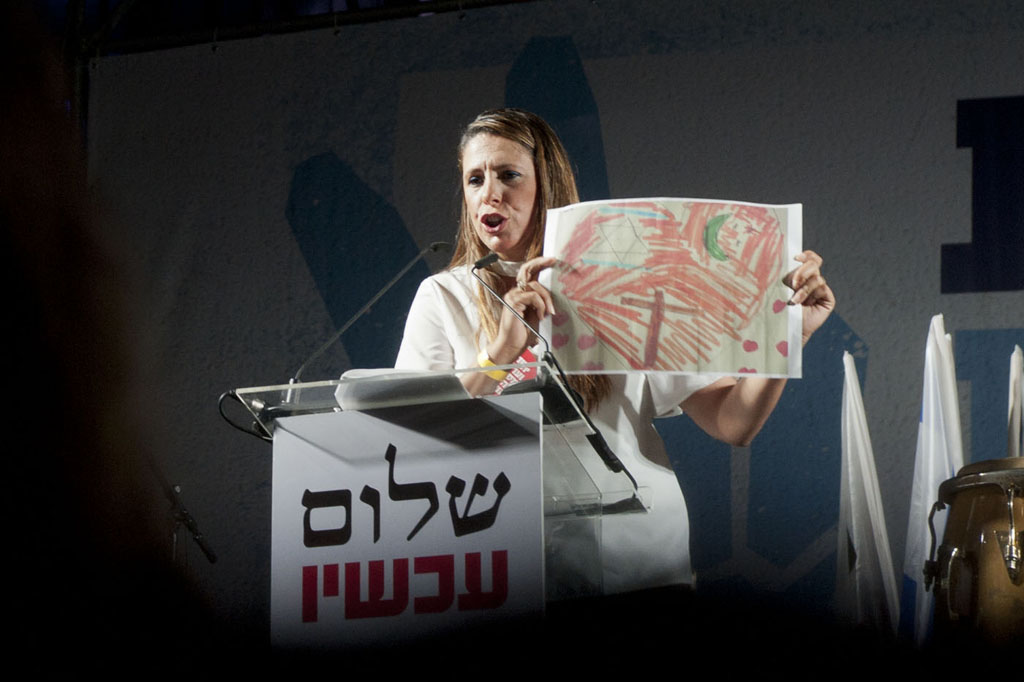 A Tel Aviv based Israeli Arab Futna Jaber praises her co-existence experience and shows her daughter’s drawing. The girl equally enjoys Jewish sufganiyot doughnuts and Arab knafeh cheese pastry, which is quite understandable. 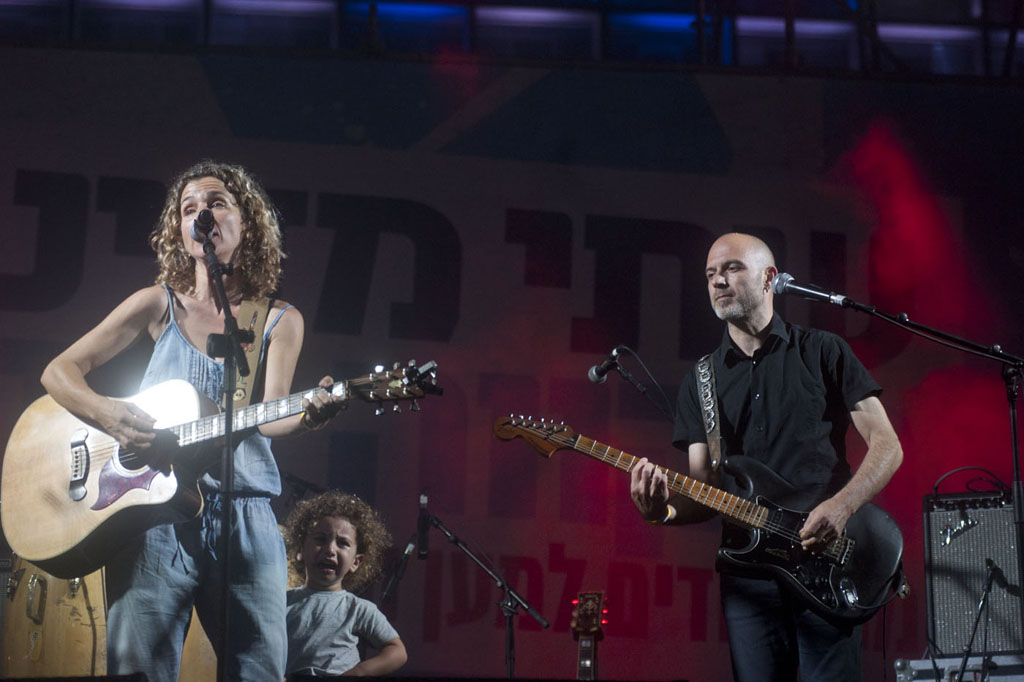 Alma Zohar sings A Ballad of the Babysitter that has never come. Or at least this is how it sounds. 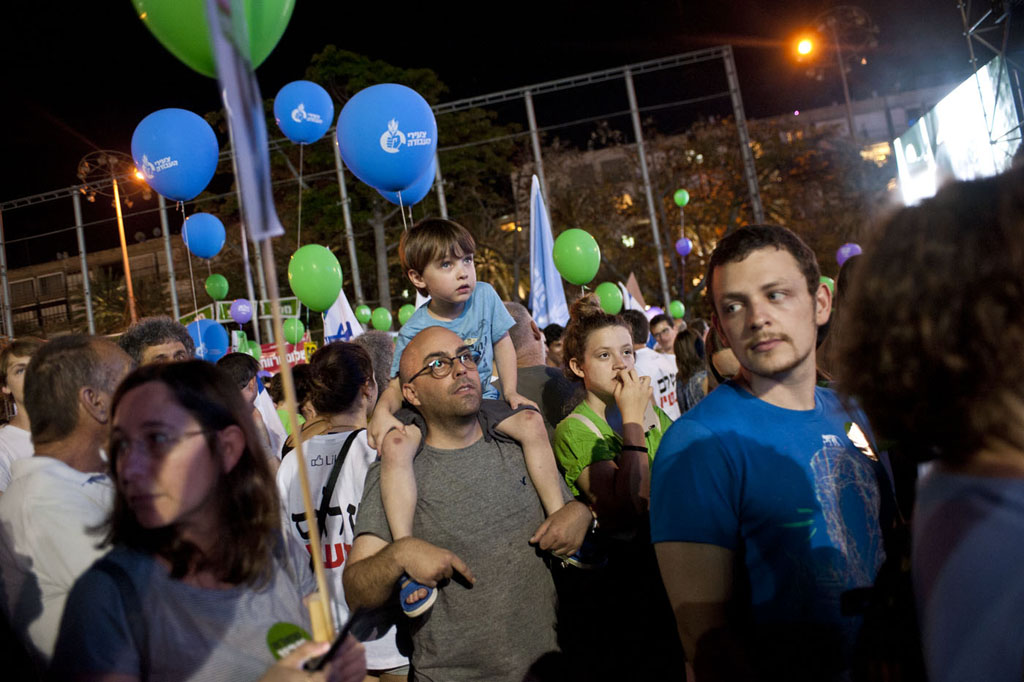 She was not alone – others brought their kids to the rally, too. 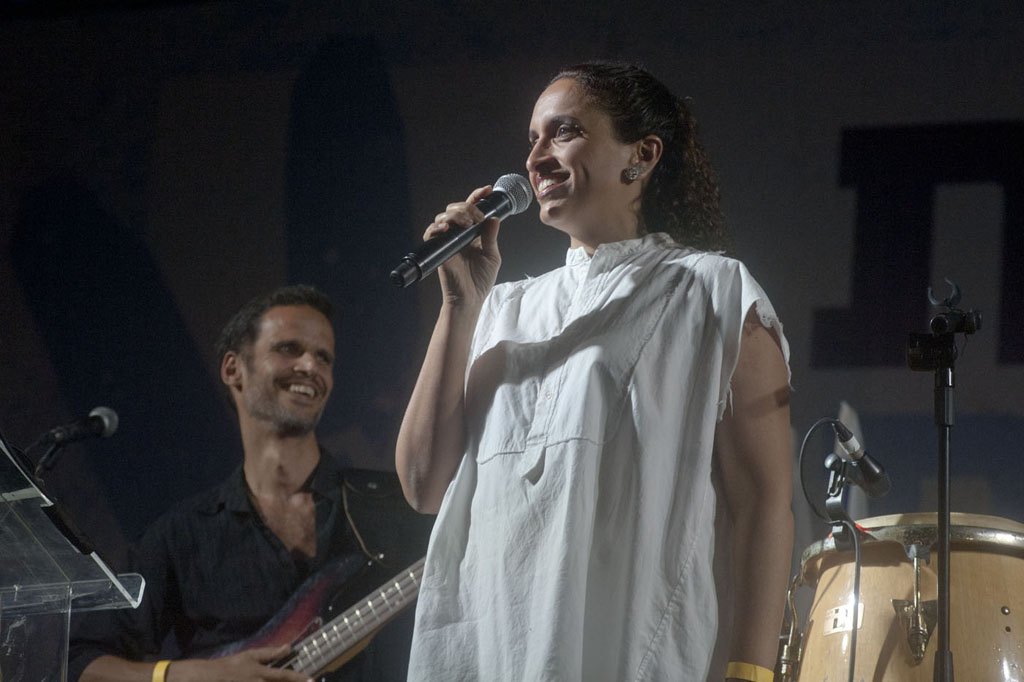 Intrepid Achinoam Nini, the one and the only. Who needs captions. 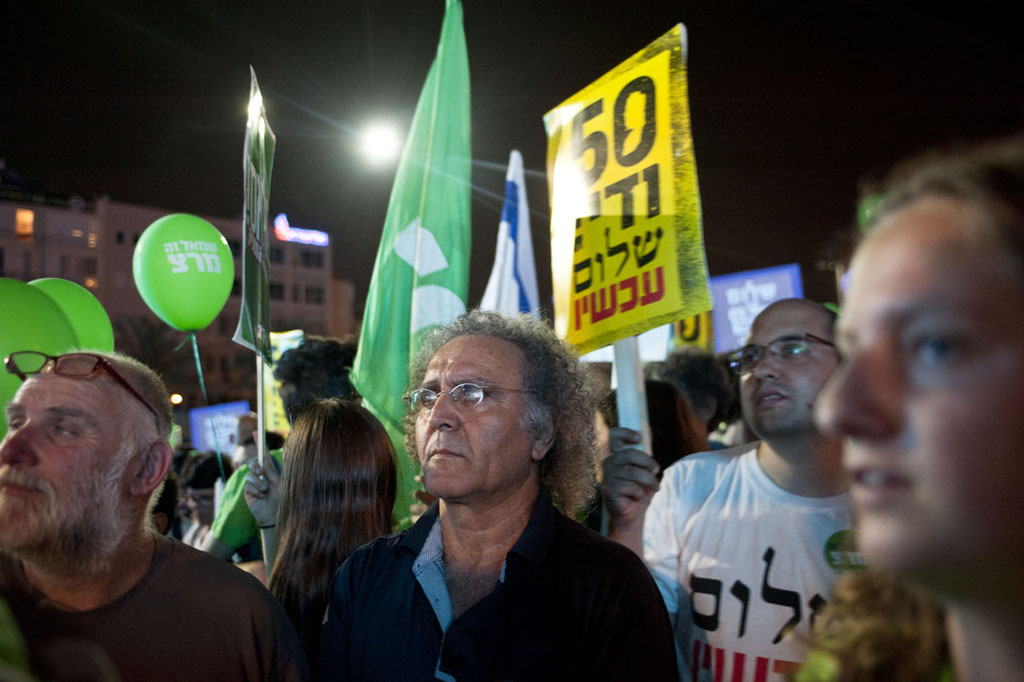 To those who ask: “And where are bird’s eye shots of the crowd?” I answer: “First, I don’t have a drone. And second, may I quote Anna Akhmatova, one of the greatest Russian poets ever:
“I was with my people then,
There, where my people, unfortunately, were”.

Well, not so over dramatic. She referred to the dark Stalin era, while we are fortunate to enjoy the many freedoms of the only democracy in the Middle East. 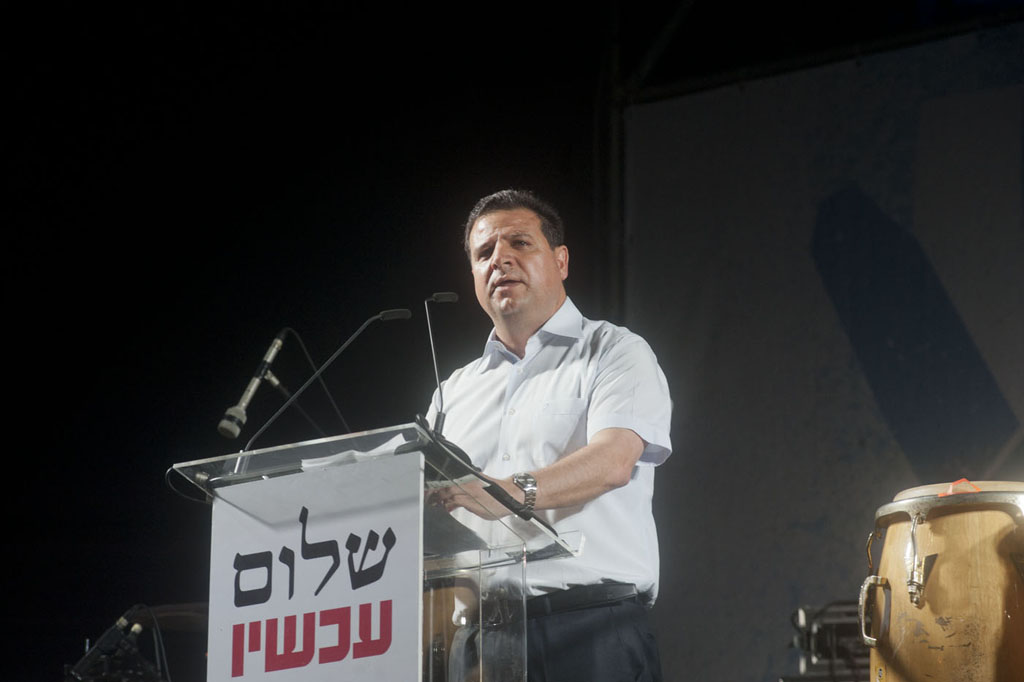 Ayman Odeh, head of the Joint (Arab) List: “In the face of the increasingly radical right-wing government… that incites again and again… now, in the face of annexation plots, and racist and anti-democratic legislation… we must form a public democratic camp around our common principles — with a clear call for the end of the occupation, for equality, democracy and social justice for all citizens… For coexistence to be possible, we must respect and accept national identities of each and every one of us.” 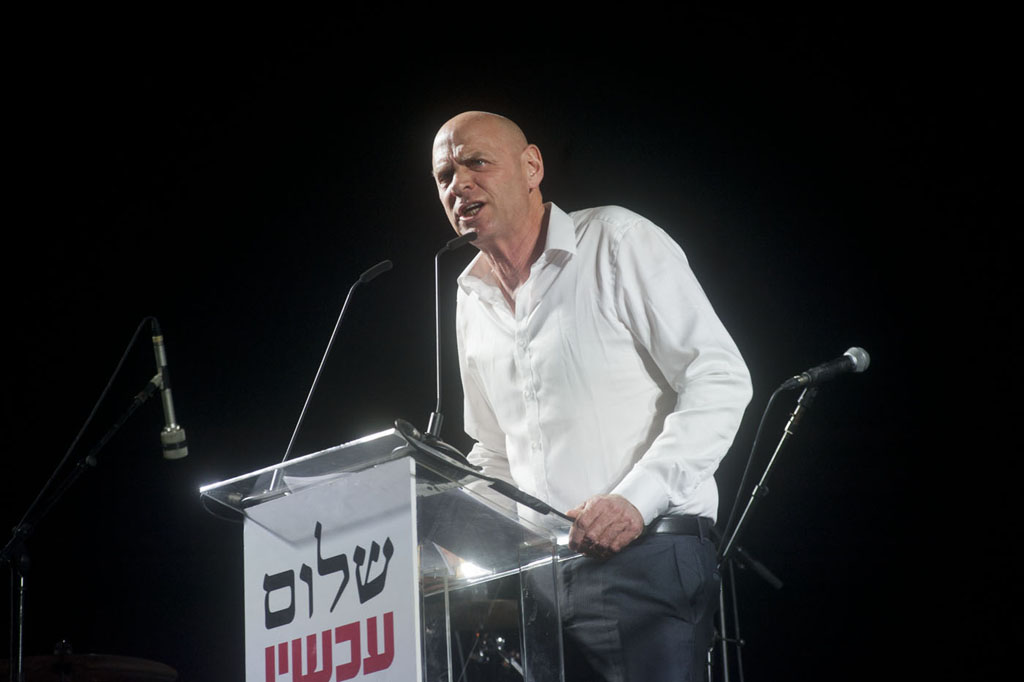 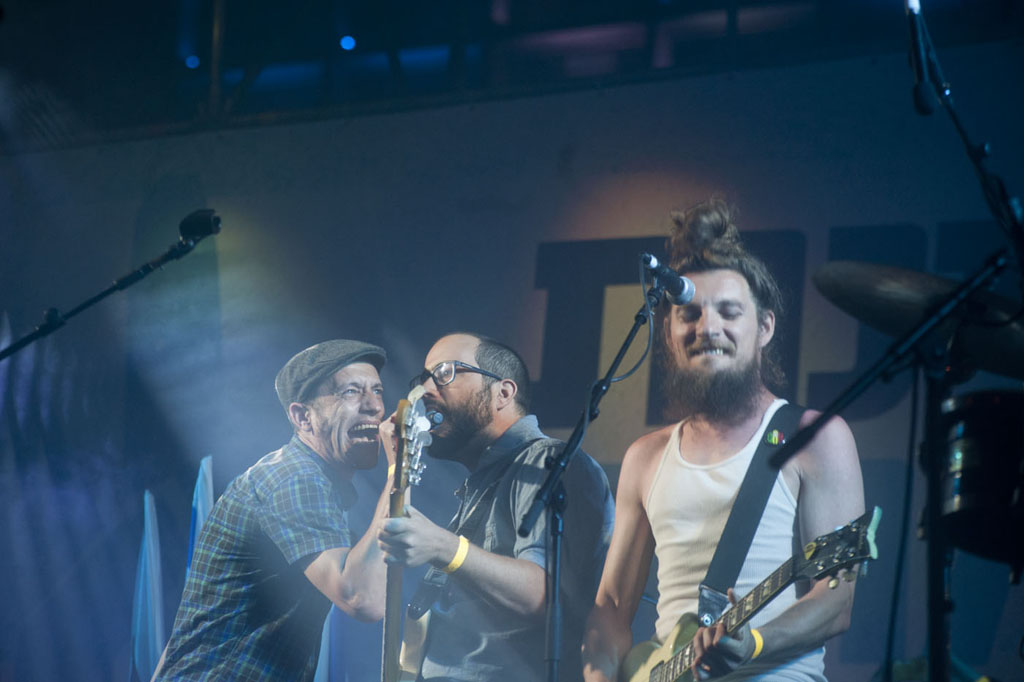 Next time you decide to say something nasty about “these Russians that have come to destroy our democratic values” just take a deep breath think of these three daredevil guys from Los Caparos rock group who were yelling from the stage in the languages of Tolstoi and the Torah:
“I don’t buy this BS!” Make no mistake – they mean the official propaganda. We Soviet expats know a thing or two about it. 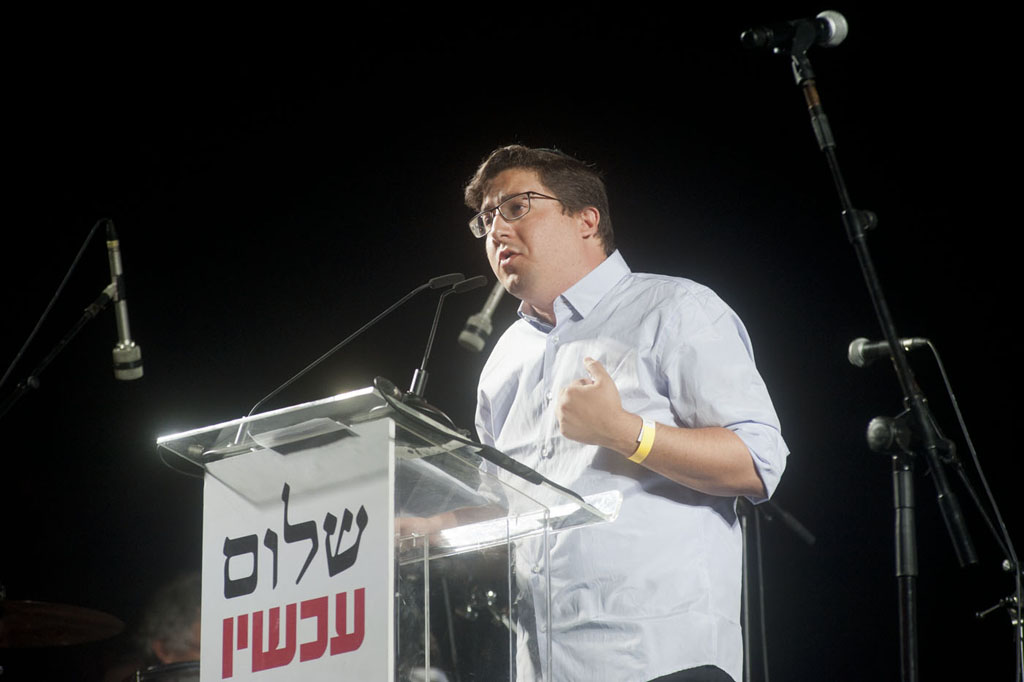 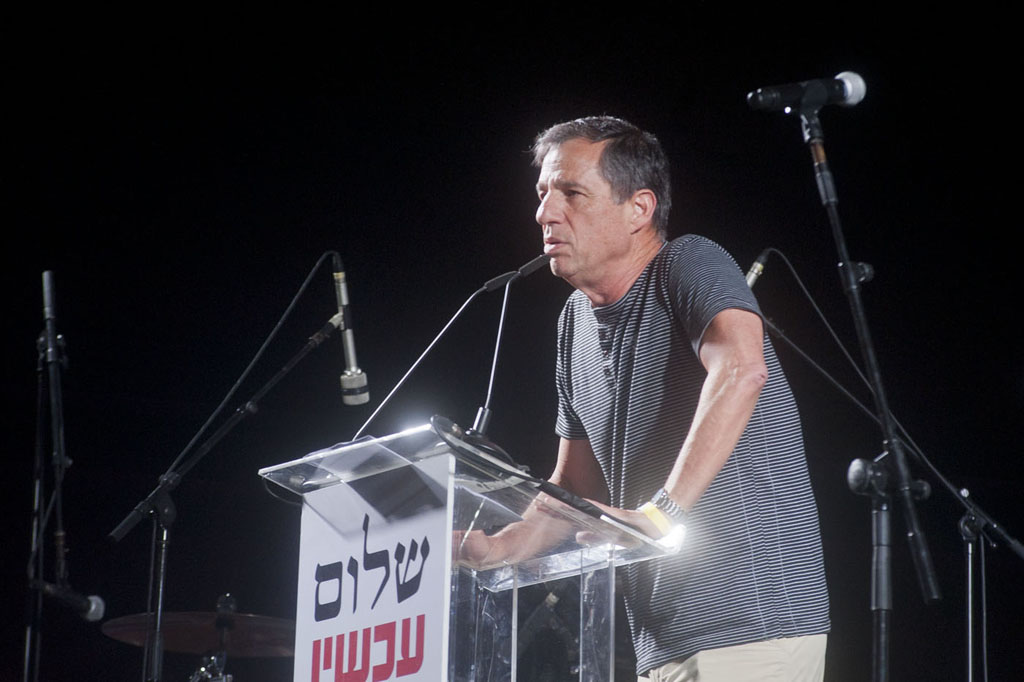 “One day we should conduct negotiations with Marwan Bargouti.”
This somewhat controversial statement made by the Peace Now founder Tzali Reshef caused a storm in the local social media. “Talks with the murderer of our children? Never!”
But hey, during the 2014 Hamas provoked war in Gaza about 400 Palestinian kids died of our weapon. At that time, very few Israelis were appalled by the carnage, while many soothed the pangs of conscience by repeating “Their parents voted Hamas” mantras.
So maybe it’s about time to stop playing saints.
Indeed, #50isEnough.
Photos (clickable) by Maxim Reider