I stood at the mikveh on the southern side of Masada.

Flecks of ancient plaster ware still visible on the walls.

I stared and stared.

Nothing, not the Herodian palaces nor the Roman bathhouses at Masada, the 1300 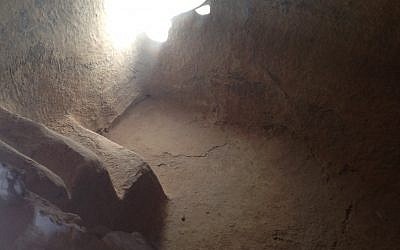 foot high mesa arising from the Judean Desert near the Dead Sea, the last refuge of the zealots fleeing the destruction of Jerusalem, moved me as much as the lonely ritual bath at Masada.

The Jewish rebels had come to this isolated stone outcrop and for the time being, until the Romans attacked, were alone with themselves and with God.

The mikveh waters were fed by rainwater collected in cisterns.

It was easy to imagine the moment when the warrior/scholar/farmer first entered the waters.

Were they cold? Protected from the desert sun by thick walls? Or were they warm, like a child’s bath?

Nearby were the elaborate caladarium tepidarium, frigidarium and the royal recreational pools. They were the centers of indulgence, information gathering and society for Herod and his court.

The simple mikveh had no such features.

It was made according to torah law. The measurements were uniform throughout the world.

And its purpose was not physical transformation but spiritual one.

Now, I, over two thousand years later, stood, at the entrance to the mikveh.

My ancestors had wandered Europe for hundreds of years, but they always looked east, towards the Holy Land and their history.

I knew my companions would be coming to look for me.

But I wanted to remain, to communicate with the generations who had gone before me.

My mother had survived Auschwitz, my father, Siberia and Tajikistan.

Dozens of their family members were sent to Belzec and Majdaineck.

Some were killed in cemeteries after having been forced to dig their own graves.

And yet, here I was.

I had been a thought, a dream, a hope, in my 19 years old mother’s body. She weighed 85 pounds. “One more week,” she told us “and I would no longer have lived”.

My father said, that in Siberia, during the depths of winter, he ate grass. Later he nearly died of malaria.

And yet, here I was.

For a moment, I wished, imagined the mikveh was once again filled with water.

Had my ancestral mother or father walked these steps?

I turned to leave.

I took one more look at the mikveh.

It had endured and endured.