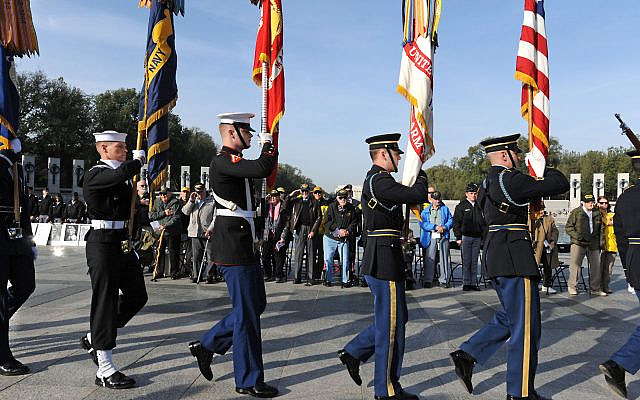 This past Friday as Shabbat candle lighting time was approaching, I was lounging on the couch with friends, a commercial came on the TV about veteran care packages for the holiday season. We watched the commercial and then started having a conversation about how thankful we are for our men and women serving our nation.

We started asking each other, “how many active duty personnel we have and how many veterans do we have in America.” and “Do you have anyone that has served in your family?” Then I said: “Did you guys know that around 20 veterans commit suicide every day?” They looked at me in disbelief and said “no way that’s true” “that’s impossible” so we pulled out our phones to research this.

What we discovered was shocking and disturbing. In previous years, it was reported by the U.S. Department of Veterans Affairs that on average 22 veterans commit suicide each day but that number has dropped to 17 in recent years. The highest suicide rate was among younger veterans, ages 18 to 34. In 2017, there were 44.5 suicides for every 100,000 veterans in that age group.

In total, over 7,000+ veterans committed suicide in 2018 and while younger veterans account for the highest rate of suicide, older veterans had the greatest total number of suicides in 2017. Veterans ages 55 to 74 accounted for 38 percent of all veteran suicide deaths that year.

The Government Accountability Office reported in December that the VA left nearly $5 million unused in its suicide prevention outreach budget. The number of social media posts, public service announcements, billboards, and radio, bus, Facebook and print advertisements declined in 2017 and 2018.

I’m writing this not because I have all of the answers to fixing this emergency but in hopes of raising awareness and to shine a light on some of the organizations that are on the front lines of saving lives.

It is the solemn duty of every single American to do everything we can to reduce these numbers immediately;

Here are some of the federal agencies and organizations that are working hard to support our Veterans.

The Veterans Crisis Line launches in 2007, and they have answered nearly 4.4 million calls and initiated the dispatch of emergency services to callers in crisis more than 138,000 times.

FitOps Foundation was created to help veterans returning from combat and keep them from committing suicide. Veterans in FitOps thrive through community, support, and renewed sense of purpose. Earlier this year, WWE Star matched $1M in donations to FitOps.

Mission 22 is dedicated to healing America’s veterans when they need it most — right now. We offer treatment for Post-Traumatic Stress and Traumatic Brain Injury, substance abuse and all of the issues veterans are facing today

Vet2Tech is connecting Veterans with employment opportunities in manufacturing and technical careers nationwide, and educating employers on the tangible and intangible benefits of hiring Veterans.

In closing, I’m calling on all Americans to no longer turn a blind eye to this national emergency. Please do your part as a private citizen or business owner or elected official to support our veterans. Our brave men and women have fought for our country, our freedoms and our way of life. They deserve our unconditional love and support!

About the Author
Bryan E. Leib is a Philadelphia native, he is a Jewish Voices for Trump Coalition Member and a former U.S. Congressional Candidate in 2018 for PA-03.  He is the Chairman of HaShevet and he has served on the boards of the National Museum of American Jewish History, United Way, Jewish National Fund, Jewish Business Network and the Camden Youth Soccer Club. He tweets at @Bryan_E_Leib
Comments