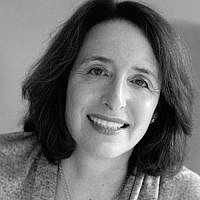 The Blogs
Leslie Dannin Rosenthal
Apply for a Blog
Please note that the posts on The Blogs are contributed by third parties. The opinions, facts and any media content in them are presented solely by the authors, and neither The Times of Israel nor its partners assume any responsibility for them. Please contact us in case of abuse. In case of abuse,
Report this post.

I knew the call would come. I knew as soon as travel could resume, that my federation, the Jewish Federation of Greater MetroWest NJ, would plan a mission to Israel. I was figuring on July at the earliest. And I knew I’d be going, because being separated from my friends and our partnerships, and from the Land, had gone on longer than it ever has in the last fifteen years. I just didn’t know that I’d be going on a less-than-72-hour Solidarity Mission, the first such mission by any Federation since Operation Guardian of the Walls began, and since the start of the pandemic lockdown.

The brainchild of Rabbi Mathew Gewirtz of Temple B’nai Jeshurun in Short Hills, the mission was meant for Greater MetroWest clergy and for lay leaders including the Federation Board and its past presidents. The ceasefire was declared on May 21 and by May 26, the invitation went out for a journey that would leave Newark Liberty on Sunday afternoon, June 6, and leave Israel late in the evening on June 9. We wound up being 25 in total, including 12 rabbis and cantors and a cadre of experienced lay leaders.

The decision to go was easy. Other than the intense nature of a very short journey, the most difficult part about going to Israel was the paperwork and the required Covid-19 PCR testing.

My husband said, “It’s a little crazy, don’t you think?” I replied that crazy was when I flew into Ben Gurion Airport in 2014 as part of a JFNA national mission while there were reports of rockets going past the airport. I got my nasal swab, packed my carry-on bag (an achievement all on its own; I’ve been to Israel over 25 times and have never done carry-on before) and spent a long weekend trying to decipher and complete health forms in Hebrew.

I went this time, not only to show our friends in Israel that we stand with them when rockets rain down, but also because I needed to see for myself and hear from those living through it what hope there was for repair of, and even progress towards, the shared society efforts that are one of the hallmarks of our Federation’s work in Israel. I needed to be in Israel, to see it for myself, to talk with Israelis, instead of only reading commentary in the Times of Israel, The Forward, Ha’aretz, Jewish Insider, Tablet, and The New York Times. I needed to touch the stones of the Kotel and feel the dirt roads of Kibbutz Erez, which sits five miles from the Gaza border, underneath my feet. I needed to reassure myself that the only place I feel truly safe in the world, the place that for my entire life has promised to take me in if I need shelter, was still there. For the first time in my life, the level of vitriol and the lack of understanding, the oversimplification and outright antisemitism I saw happening on the streets of the United States, as well as online and in print, made me scared for the future of the State of Israel. It’s not that I think Israel is a perfect place, nor is the United States, which gave my great-grandparents safe harbor from pogroms at the turn of the last century. But in the end, it’s the only place I have as a Jew. I needed to wrestle with Israel and all its complexity in person, and to hug it close at the same time.

We began a whirlwind exploration of Israel at a time of almost unprecedented change. Visiting any country for less than three days is going to provide a snapshot at best, and the news items of the day come faster than very few people can take in, especially from a distance. The only thing I’m sure of is that by the time you read this, is that some of what we saw will have changed, at the very least because of a new government, without Bibi Netanyahu at its head. Nevertheless, some of the change we saw will take longer to occur and it will take even longer to understand the implications of all of this change.

Our very first stop brought us into the intersection of the long history of Israeli politics and Israeli military authority. We met with Avi Dichter, a former Shin Bet director, a member of Likud, at the Knesset. Dichter’s long experience in dealing with Hamas and the Palestinian Authority leaves him without much hope for finding a solution with Israel’s Arab neighbors. We emerged from that meeting into the main hall of the Knesset, adorned with Chagall tapestries meant to remind Knesset members of their obligation to consider the past, present and future of the Jewish people and the State of Israel. Dichter understands that obligation and sees a very difficult road forward. A sobering start to our mission.

Our very last meeting was with Labor Party MK Rabbi Gilad Kariv, the first Reform rabbi elected to the Knesset. Until his election, Rabbi Kariv served as head of the Reform Movement in Israel and has been a major force behind the push for pluralistic Judaism recognized and supported by the government. Rabbi Kariv was honest with us about the prospects for what the “change” government will be able to accomplish both internally and externally, because of the slim nature of the majority the coalition holds. The most important accomplishment of this new government, he believes, will simply be that — a government that has to produce a working budget and take care of all of Israel’s citizens. But he is determined to make progress on the issues of Jewish pluralism.

In between those two visits with officials, we had multiple opportunities to encounter everyday Israelis. We went to bring comfort to people whose homes in Ashkelon were directly hit by rockets and those who live in Kibbutz Erez, which is so close to the Gaza border that there is barely 9 seconds before the “Tzeva Adom,” sound, the siren that warns of incoming rockets. And yet all any of them want is to live in peace with their neighbors in Gaza, to the point where the kibbutz and the local regional council are working on plans for an international industrial park in the buffer zone between Gaza and the border that would employ 10,000 Gazans.

We brought greetings from home to the children and grandchildren of Greater MetroWest residents, Lone Soldiers who have made aliyah. (New fact learned on this mission: there are more Lone Soldiers from New Jersey than any other state in the U.S.!) They are Israeli through and through, committed to both defending Israel and making it a better place. It was good to hug them and send pictures back to their families.

We went to Lod where just two weeks before, rioting erupted as the war began. It is the internal strife that was of greatest concern to the Israelis we met, the idea that the roads they drive every day, the stores where they purchase their groceries and vegetables, their fruit and their fish, were not safe, not because of rockets but because their fellow citizens were attacking them, Arabs attacking Jews, and Jews attacking Arabs. And over and over, we heard from the parents, teachers, entrepreneurs, retirees, and professionals, that they would be redoubling their efforts at shared society.

Out of everything we saw, I was most reassured for the future of Israel by our meeting in Abu Gosh with a group of lay leaders who are committed to sitting together to create a cohesive, shared society. For me, it was like a family homecoming. Many of the participants are Israelis I know from other programs the Federation Global Connections department has created over the last 25 years. The goal of many of our programs in Israel is to create living bridges between Israelis and American Jews in Greater MetroWest. The shared society cohesion group, however, is by Israelis, for Israelis. They meet to talk through the needs of their families, their communities, the fears that keep them apart and find what can bring them together.

I was proud that we, the Federation, could offer our clergy, who represented a broad range of denominations from Orthodox to Conservative to Reform, the opportunity to observe and absorb, to learn and reflect. Rabbis and cantors are so often called upon to be out in front, leading the conversation and teaching all those around them. On this mission, we had the privilege of seeing them as students, as learners, asking insightful questions and making cogent observations. I am grateful to have been with all of them on this journey.

Whenever I go to Israel, I’m ready to have my heart broken open. By the seemingly insurmountable challenges to peace with Israel’s external neighbors, by the fight for recognition of streams of Judaism beyond ultra-Orthodoxy, the absolute necessity of bringing Israeli Arabs into full opportunity. But my heart is also broken open by the absolute feeling of connection I feel as I walk the streets of Jerusalem and Tel Aviv, Ofakim and Hurfeish. The beauty of the hills and mountains, the green of fields, the tender cultivation of a flower bed in a home garden can all cause a sharp intake of breath. My heart can be most broken open by hope when I’m in Israel. Hope for a new government that includes Ra’am and Yamina — how can it last, and what happens if it doesn’t? The hope I see when our Federation brings together kibbutzniks and Likudniks, Orthodox, secular and Reform, Ethiopian olim and ninth-generation Tel Avivi to work on a shared society, despite the harm caused by the recent riots, is enough to knock me off my feet with hope.

The most common song we share about hope as Jews is, of course, “Hatikvah,” about the hope of a people yearning to breathe free. On this trip, I found myself reminded of another song that touches on hope, “Al Kol Eilah,” which asks that all of these be kept safe: “the honey and the sting, the bitter and the sweet.” Any time spent in Israel, even one that lasts less than 72 hours, will present you with all of these. The song continues: “Do not uproot what has been planted, do not forget the hope.”

We are constantly planting new seeds for change and growth in Israel, for a shared society, for a pluralistic Judaism, for a stronger fabric for all Israel. There are times when growth is stunted, when the fabric seems torn beyond repair. That is exactly the time to dig deeper, find stronger thread. If you have the chance, go yourself, despite the PCR test and the blood draw, and don’t mind the long flight with a mask. Go and wrestle, go and hug. Don’t give up the hope – be a part of the process.