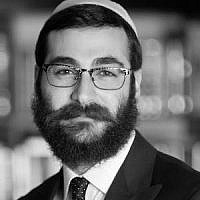 The Blogs
Yehuda Ceitlin
Apply for a Blog
Advertisement
Please note that the posts on The Blogs are contributed by third parties. The opinions, facts and any media content in them are presented solely by the authors, and neither The Times of Israel nor its partners assume any responsibility for them. Please contact us in case of abuse. In case of abuse,
Report this post. 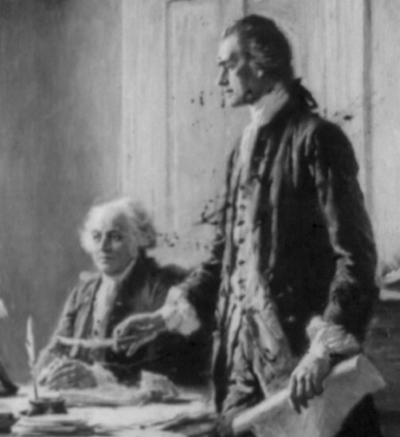 John Adams (seated) and Thomas Jefferson discussing a draft of Declaration of Independence. Reproduction of a painting by J.L.G. Ferris

It took only eight sincere words to rekindle the close connection between two American luminaries that had been shattered by political wars and opposing ideologies. Those eight words helped restore the bond of two Founding Fathers, both of whom served as presidents of the United States.

Thomas Jefferson and John Adams were at odds as early as 1790 over the nature and future of the newly established United States. In 1811, mutual friends tried to bring the two aging revolutionaries together, Jon Meacham writes in his bestseller, “Thomas Jefferson — The Art of Power.”

A tenderhearted comment by Adams was all it took for Jefferson to unearth his feelings of fellowship. “I always loved Jefferson, and still love him,” were the words Adams uttered, to which Jefferson replied, “This is enough for me.” The two went on to exchange 329 letters in which they shared thoughts and memories until their deaths on the same day, July 4, 1826.

As the nation recently marked the 272nd birthday of Thomas Jefferson on April 13, the Jewish community around the world was in the midst of commemorating a period of mourning that lasts until Shavuot over the deaths of 24,000 Torah scholars in the land of Israel in the second century.

A deathly plague devastated the largest yeshiva in the land, which was led by Rabbi Akiva, one of the greatest of the Mishnaic sages. The Talmud relates the cause for the students’ ruin: “They did not conduct themselves with respect for each other.”

Commentaries explain that the students’ absolute belief in their truths and their inability to convince their peers of it had led them to hold one another in low regard. With each person having unique character traits, it was only natural that each carved his own path in the practice of spirituality. But, with each believing his own path was superior, the students treated any other approach as inferior.

The eight words Adams said about Jefferson — or more specifically, their sentiment — could have prevented the plague. One’s allegiance to his or her faith and ideology should not come at the expense of demeaning fellow human beings. After all, it was Rabbi Akiva who said the commandment to “love your fellow as yourself” was “a fundamental principle of the Torah.”

The Lubavitcher Rebbe, Rabbi Menachem M. Schneerson, once stressed that no matter how deeply we are involved in our faith, we must always be broadminded enough to appreciate that someone else may have a different approach. There is enough in each of us to respect and the world is large enough for us to coexist with others.

While the second and third presidents were not chavrusa (learning mates in yeshiva), Jefferson commented about his renewed harmony with Adams, “When there are so many other things on which we agree, why should we introduce the only one on which we differ?”