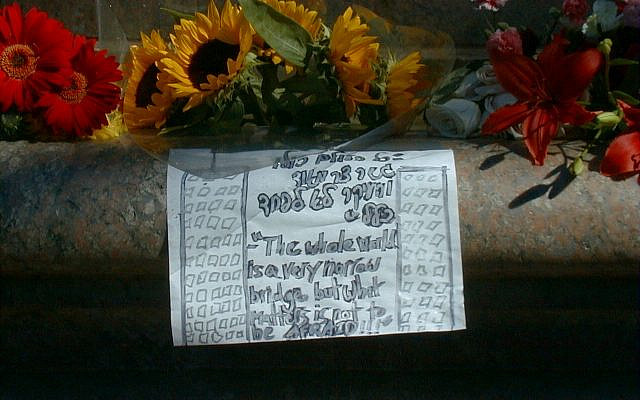 A section of the Firemen's Memorial on Riverside Drive at 100th Street in Manhattan on September 12, 2001. (Andrew Sherman)

The pandemic has warped our sense of time.

I think about that — and so I write about it — all the time. (Or maybe it seems like all the time, given all the warping.) But every day being basically the same as every other day, give or take a random, unpredicted, biblically destructive downpour, means that it’s hard to gauge how long ago something happened.

It’s been 20 years since the September 11 attacks?

But it didn’t. It happened 20 years ago.

Exactly two decades ago, some men hijacked four airplanes, flew two of them into the World Trade Center, flew one of them into the Pentagon, and aimed the fourth at Washington but were forced to plunge it into the ground in Pennsylvania by the unimaginably brave doomed passengers who realized what was going on and fought back.

Two-thousand, nine-hundred and seventy-seven people died as a result of those attacks, along with the 19 terrorists who murdered them.

I think that all of us who were old enough to be sentient on that day remember it, or at least those of us who lived in the metropolitan area do.

It was a day that began with what since then I always have thought of as a September 11 sky, intense, cerulean, cloudless, surpassingly beautiful. We were told, after September 11, that irony was dead (don’t worry, it soon rose from its grave), but the sheer loveliness of that grotesquely hideous day was a nearly literal cosmic irony.

Those of us lucky enough to not lose someone we loved on that day — I live in Manhattan and work in northern New Jersey, so many of the people I know are not so lucky — all have stories. I have a friend whose bus was caught in the helix going into the Lincoln Tunnel when the first plane hit and traffic stopped dead; she saw the whole thing. I have another friend who worked downtown, at the United Synagogue office, and saw it from there; he’d been four blocks from the Sbarro bombing in Jerusalem just the month before. I have a friend whose son’s first day in kindergarten, at the Abraham Joshua Heschel School, had made him change his flight to California; he’d originally been booked on one of the hijacked flights.

There are so very many stories.

I remember how we put out the Jewish Standard the next day, with the cover showing the smoking pile. The headline, from our brilliant art director, Jerry Szubin, was “The mourning after.” The photograph here, by my husband, Andy Sherman, was our cover the next week; it was of the memorial at the Fireman’s Memorial, where 100th Street meets Riverside Drive.

We moved through it without being exactly sure where the ground was and how our feet met it.

I remember how the smell of the towers and the airplanes and the death and the fear blew uptown every night for months. I remember how every airplane overhead, once they were allowed to fly again, caused many of us to flinch, and how the sound of hovering helicopters evoked memories.

Everything is different now. The world has changed. Young adults now were born after it happened. But the memory of September 11 is burned into those of us who were there. I hope that we have learned from it.

It perhaps is fitting that Yom Kippur, the Day of Atonement, falls just a few days after the 20th anniversary of the attack. Yom Kippur ends in Neilah, the soul-shaking, oddly exhilarating call to continue with life. We know, of course, that life is a cycle, and that the need for repentance and the need to emerge from it will happen again, on schedule, next year. But history also propels us forward. Let us hope that we move in the right direction.