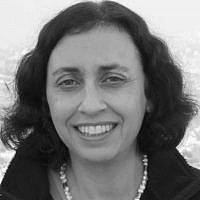 The Blogs
Michele Chabin
Apply for a Blog
Advertisement
Please note that the posts on The Blogs are contributed by third parties. The opinions, facts and any media content in them are presented solely by the authors, and neither The Times of Israel nor its partners assume any responsibility for them. Please contact us in case of abuse. In case of abuse,
Report this post.

This week I received an on-line invitation to an event in Tel Aviv: “Israel and the Media: Do We get a Fair Hearing?”

In its promotional material the event, planned for February 23 and hosted by a speakers forum called Tel Aviv International Salon, noted that “there is no other conflict on earth that draws as much media attention as the one here between Israel and Palestinians. And this has come increasingly under the spotlight in the wake of the ongoing wave of terror, with some observers alleging that the foreign media have an anti-Israel bias, questioning if we can receive a fair hearing.”

The organizers boasted about the four “amazing high-level speakers, who live, breathe and work with international press who cover Israel and the conflict every day”: Lt. Col. Peter Lerner from the IDF, Emmanuel Nahshon from Israel Ministry of Foreign Affairs, Charlotte Halle from Haaretz.com and Joe Hyams of HonestReporting.

Going through the list of speakers I noticed that not one of them is an on-the-ground, get-your-hands-dirty foreign correspondent. Lerner and Nahshon are two respected government spokespeople and Halle is the very professional editor of the English-language edition of Haaretz, an Israeli newspaper. HonestReporting is a media watchdog group.

How, I asked the organizers on Facebook, can a panel discussion on media bias by foreign journalists not include at least one foreign journalist? I mean, wouldn’t the audience want to hear journalists relate their experiences in the field and ask them why they write what they write? Shouldn’t journalists be able to explain that that awful headline or caption was written by someone back in New York or London or Sydney? Or that an article didn’t have a government response because a government spokesperson took days to come up with an answer?

I offered to sit on the panel since I’m a foreign correspondent for USA Today and other publications. I’ve been doing this for nearly 30 years.

In response to my question, and attempting some damage control, the administrators posted a new Facebook post, which sounded like it was written by a high school student.

“We really appreciate the interest and feedback we’ve gotten on our panel and are SUPER excited for our panelists’ insights and Q&A from the audience. We also want to give you a little “behind the scenes” of the work we did to hold this event.”

“INVITATIONS TO FOREIGN PRESS:
For the record, invitations were absolutely extended to quite a few leading members of the foreign press at outlets including NYTimes, BBC, Bloomberg, and CNN. Unfortunately, they all declined for one of the following reasons:
—They could not comment on the matter publicly
–They had a scheduling conflict
–They simply did not respond”

“When putting together an event like this,” the message said, “we have to juggle various priorities and time was one of them. We had to confirm our panelists by a certain date and none of the journalists we reached out to were able to accept the invite.

“Nonetheless, we will have a dynamic conversation from different perspectives, including yours! Your voice is welcome! Please bring questions for the panel! Thank you.”

This answer is so ridiculous, on so many levels. First, with all due respect to the NYT, BBC, Bloomberg and CNN, the foreign press corps in Israel doesn’t end there. There are a couple hundred of us who “live, breathe and work” Israelis and Palestinians.

Second, at the time of the invitation the event was eight days away. Certainly TLV International Salon could find some foreign journalist during that period of time and simply send an updated invite.

Third, it’s pretty damn hypocritical to hold an entire event on the alleged lack of objectivity and fairness on the part of foreign journalists and then not allow even one of them to respond (yes, I know, no one was available to speak)?

A panel comprised of two government employees, a pro-Israel watchdog and an editor of an Israeli newspaper does not make for neutral, unbiased debate on foreign media coverage.

After our Facebook exchange the organizer actually had the chutzpah to invite me to sit in the audience and ask a question in order to get my viewpoint across. The only question I would ask is: “How can you claim media bias when you could not find the time to find a single journalist to sit up there on the podium? Wouldn’t you call out an event related to women that had no women on the panel?“

Those of us who go out in the field, whether it’s to the Old City of Jerusalem, the scene of so many terror attacks, to the West Bank or other hot spots, deserve public scrutiny, but also respect. You don’t like what we’ve written? Dialogue with us. We have a lot to say and deserve the chance to be heard.

The next time you organize or hear about a conference on media bias in Israel and you want to hear the real story, invite some actual foreign correspondents currently reporting from Israel. We can and should be able to speak for ourselves.

Michele Chabin is the Israel correspondent for USA Today, Religion News Service, the New York Jewish Week and the National Catholic Register. She speaks about Israelis, Palestinians and the media in the US and Israel. Twitter: @michelechabin1

About the Author
Michele Chabin, a reporter for USA Today, RNS, the New York Jewish Week and other publications, has reported from Israel for nearly three decades. She speaks about Israelis and Palestinians to Israeli and Diaspora audiences.
Comments