The Blogs
Yedidia Z. Stern
Apply for a Blog
Please note that the posts on The Blogs are contributed by third parties. The opinions, facts and any media content in them are presented solely by the authors, and neither The Times of Israel nor its partners assume any responsibility for them. Please contact us in case of abuse. In case of abuse,
Report this post. 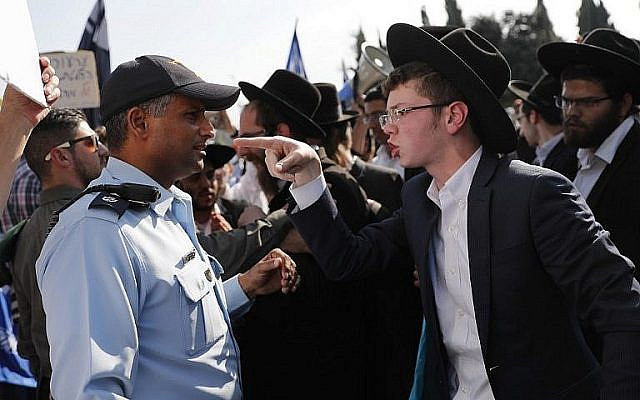 The committee established by the IDF Chief of Staff to examine enlistment data among the ultra-Orthodox revealed that the mechanism for calculating and reporting on these data was deliberately inaccurate. It turned out that contrary to the rosy reports issued over the past several years, not only has the number enlisting among the ultra-Orthodox fallen short of the target number, but, in addition, that there is no upward trend in these numbers. The report minces no words: the calculation was based on misinterpretation of the law which was done “consciously, deliberately, and systematically”; the flaws “were the result of serious professional negligence”; and this was a “severe system-wide, professional and high-level debacle.”

Given the fact that this is an issue that the Supreme Court has referred to as being “on the most sensitive faultline of Israeli society,” and that time after time Israeli governments have risen and fallen around this critical issue, we cannot exaggerate the importance of dealing with the failures uncovered, that is by clarifying the facts and rectifying the situation.

But the committee that conducted this investigation decided to “think big” and go beyond the mandate it received from the Chief of Staff. Instead of simply ascertaining the facts, it decided to take the next step, and address “matters of policy.” The team wrote that “the political echelon has an obligation to come up with a national and social strategy for the enlistment and military service of members of the ultra-Orthodox community.” We may ponder the question of whether a committee appointed by the Chief of Staff to remedy a malfunction in the IDF should be making the decision as to the obligations of the political echelon. This is a prima facie mix-up of two different branches and – though certainly motivated by good intentions – runs counter to democratic good practice.

Even more important: The committee did not merely draw up a blueprint for action by the political echelons; it also lost no time in recommending “gradually lowering the age of exemption from military service in order to best serve the national strategy to be developed.” This is a much more serious matter.

First, this raises a logical problem. Both this recommendation and an opposite recommendation to raise the age of exemption should be outcomes of the strategy. How can the committee formulate a concrete recommendation on a highly significant issue before the political echelon has decided on a strategy? Not only is there a logical problem here, there is also a substantive issue. The committee made its recommendation without presenting all of the relevant arguments pro and con. Let us make no mistake: the lower the age of exemption and the closer it is to 18, the less chance is there that ultra-Orthodox men will enlist in the IDF or perform some other form of service for the benefit of society at large. If, for example, they can already be exempt at 20, why should they agree to perform military or civilian service that would last until after the age of exemption? How can one propose such a weighty recommendation without making the case for its being sound?

Going beyond these concerns, we should note that about half of all justices of the Supreme Court since the founding of the state have sat on cases involving the recruitment of yeshiva students and have issued a long series of rulings. The two most recent statutory arrangements enacted by the Knesset were struck down as unconstitutional by expanded court panels, on the grounds that they were not sufficiently egalitarian in their treatment of citizens. For the committee, all of these court rulings might just as well have never existed. In effect, it recommends, ignoring them and going in the opposite direction: lowering the age of exemption and thereby exacerbating the inequality. And how, we may ask, does its recommendation square with the concept of the IDF as a “People’s Army?”High Court  Granting a formal exemption to the ultra-Orthodox, who currently account for one-eighth of the population, and roughly one-fifth of those of conscription age, would be a death sentence for the concept of the IDF as a “People’s Army.”

There are, of course, weighty arguments in favor of lowering the age of exemption, despite the blow it would deal to equality. Doing so might encourage the ultra-Orthodox to go out to work at a younger age, save the IDF money, and safeguard the equality of women’s service in the army. The High Court and many of the stakeholders in the issue understand these points, but nevertheless believe that they do not lead up to the committee’s recommendation. They do not think it is possible to integrate the ultra-Orthodox into the social covenant of a shared Israeli destiny by granting them a full statutory exemption from fulfilling a basic national obligation.

About the Author
Yedidia Stern is a senior fellow at the Israel Democracy Institute and professor of law at Bar-Ilan University.
Related Topics
Related Posts
Comments