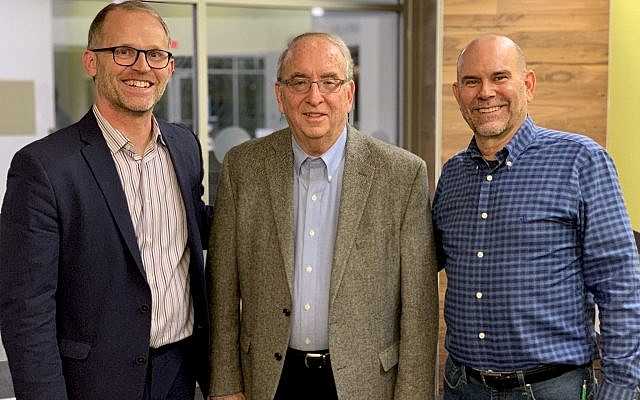 A few weeks ago, I had the honor and privilege of spending two days in Omaha, Nebraska, as a guest speaker for the Tri-Faith Initiative,  an amazing and relatively new (only 10 years old) experiment in interreligious dialogue and cooperation. I was invited by their enthusiastic and energetic new executive director, Rev. Bud Heckman  whom I knew from my many years of involvement with Religions for Peace. He asked me to lecture at the beautiful new building of Temple Israel on the campus of the Tri-Faith Initiative in western Omaha, and to speak at the University of Nebraska Omaha (UNO) to students, faculty and community people.

Rev. Heckman is putting together a growing staff of Jews, Christians and Muslims to breathe new life into this unique interreligious adventure in the heart of the Midwest in the USA. On a 38 acre campus, they have already built am exquisite Reform synagogue and an amazing mosque –the American Muslim Institute–and are currently working on finishing a Protestant church—Countryside Community Church (CCC)– a visitors’ center, and a walking path to be called “Abraham’s bridge” which will amble throughout the campus. According to their website, they are the only initiative of its kind so far in the USA, but in conversations that I had with people when I was there, I was told that there are already inquiries from other communities as to how to replicate this very special kind of interreligious cooperation.

The Tri-Faith Initiative has developed a very clear mission and vision:

The Tri-Faith Initiative fosters empathy, invites understanding, and advances common action between people of diverse faiths through the shared efforts of intentionally co-located congregations of the Jewish, Christian, and Muslim faiths and an interfaith center on one campus.
We imagine and work for a world in which religious differences are seen as an asset and strength to be celebrated, where people realize the ability to overcome fear and stereotypes and embrace one another.

As one can discern from their mission statement, this is a local initiative that is very connected to international interfaith programs and movements. This is undoubtedly due to the extensive international experience of their new director, Rev. Heckman. Indeed, I believe that many local communities from within the USA, as well as internationally, will be looking to this new organization for not only inspiration but for concrete ideas as to how to go about such an important and forward-looking project.

Actually established in 2006, after several years of discrete conversations, the organization has attracted some national and international attention during the last 10-12 years. Now, with its new executive director and the new team he is building, it is poised to become a major interreligious center in the USA, with implications around the world for the benefits and possibilities of systematic, substantive, and sensitive interreligious dialogue and cooperation.

In my view, this bold experiment is now in the right place and the right time for the interfaith movement in America. After the amazing amount of instantaneous empathy and cooperation of local interfaith efforts in many communities across the country in the immediate aftermath of the Pittsburgh Massacre in the Tree of Life synagogue, which took place on the Shabbat of October 27, 2018, the idea that interfaith cooperation can play a major role in community cohesion and healing is now front and center in the American consciousness. In the days following this tragic event, the amount of outpouring of empathy and solidarity on the part of Christians and Muslims in America towards Jews and the Jewish community was unprecedented, with thousands of people from diverse faiths participating in communal solidarity events all over the country.

The Tri-Faith Initiative is particularly active in getting their message out to the public not only in Omaha but also around the world. In particular, they are using social media well, to help spread their message of peaceful coexistence through interfaith cooperation.

In one of the synagogues in the USA where I spoke this fall to an audience of about 60 people, when I was asked what people can do to help spread my message, I suggested sincerely that if everyone went home and posted something on Facebook about the program they attended, then hundreds and perhaps thousands of people would know about it right away. But only one person actually did this.

In contrast, the Tri-Faith Initiative communications team immediately posted something about my talks on their Facebook page. And they live-streamed  my first lecture in Omaha,  and they published something about this in their newsletter , so that many more people could see and hear each other, above and beyond those in attendance. This is good strategy and effective communication, relevant to the fast-paced world in which we live.

In my second talk, at the University of Nebraska Omaha, which was also live-streamed on Facebook (and had 602 views!), they summed up on their Facebook page what I said in response to the many questions that I was asked. And this was just a few minutes after I said it:

Among the many pointed questions and frank answers, there was also the question from the audience of how to overcome hopelessness and activism-fatigue. Dr. Kronish’s answer resonated with us: read inspiring memoirs (he recommended Michelle Obama’s recent memoir), spend time with young people who are working on grassroots efforts in areas they are passionate about, and actively cultivate a glass-full attitude by acknowledging each forward step.

For several years now, I have become a believer and a promoter of the use of social media—blogs, Facebook and more—to get our message out to the public. The message ought to be loud and clear: interreligious dialogue and cooperation are essential tools for building a better life for all of God’s children, in communities, countries and regions, all over the world.

About the Author
Rabbi Dr Ron Kronish is the Founding Director the Interreligious Coordinating Council in Israel (ICCI), which he directed for 25 years. Now retired, he is an independent educator, author, lecturer, writer, speaker, blogger and consultant. He is the editor of 5 books, including Coexistence and Reconciliation in Israel--Voices for Interreligious Dialogue (Paulist Press, 2015). His new book, The Other Peace Process: Interreligious Dialogue, a View from Jerusalem, was published by Hamilton Books, an imprint of Rowman and LIttelfield, in September 2017. He recently (September 2022) published a new book about peacebuilders in Israel and Palestine entitled Profiles in Peace: Voices of Peacebuilders in the midst of the Israeli-Palestinian Conflict, which is available on Amazon Books, Barnes and Noble and the Book Depository websites,
Comments